With Robotic Cargo Ferry Launch, Europe Will Become an Official Supplier to the ISS This Month

The ESA’s newest Automated Transfer Vehicle–ATV-2, otherwise known as Johannes Kepler–is loaded up and primed for its February 15th launch... 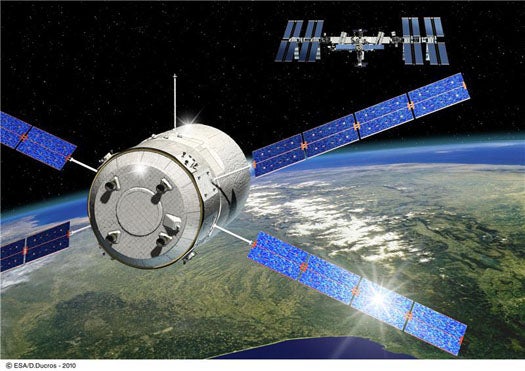 The ESA’s newest Automated Transfer Vehicle–ATV-2, otherwise known as Johannes Kepler–is loaded up and primed for its February 15th launch to the International Space Station, marking a several significant milestones for the European Space Agency and its contribution to ISS operations. Among those benchmarks, it marks the first “operational” flight for the ESA’s ATVs, the 200th launch aboard the European Ariane 5 rocket, and the heaviest load an Ariane 5 has ever hurled into orbit.

ATV-2’s trip to the ISS isn’t technically the first cargo delivery made by the ESA to the ISS; that honor belongs to ATV-2’s predecessor, Jules Verne. But Jules Verne was a qualification flight (conducted in 2008) tasked with performing several technology demonstrations before docking with the ISS and delivering a small payload.

ATV-2 is the real deal, headed straight for the ISS where it will deliver 7.5 tons of cargo, propellant, and oxygen to the crew there. It will also serve as a temporary ISS module; after docking with the station on February 26 it will hang around until June, providing extra space for the crew. It will also periodically burn some of that propellant in its own thrusters to raise the ISS’s orbit, offseting natural orbital decay caused by atmospheric drag.

Toward the end of its tour, ATV-2 will become a giant orbital waste bin. Its tanks will be filled with liquid waste and its cargo space with solid waste bags and spent or unwanted hardware. It will then be undocked, de-orbited, and incinerated during re-entry.

But perhaps the most significant milestone is the ESA’s official operational entry into the ISS’s re-supply chain. With the Space Shuttle program coming to an end, Russian Soyuz capsules and Progress rockets along with Japanese HTV-2 spacecraft—joined now by the European ATVs—will become the only means to ferry supplies from Earth to the ISS.

You can follow Johannes Kepler’s progress via the ESA’s ATV blog.