Can Our DNA Electromagnetically ‘Teleport’ Itself? One Researcher Thinks So

A Nobel prize winning scientist who shared the 2008 prize for medicine for his role in establishing the link between... 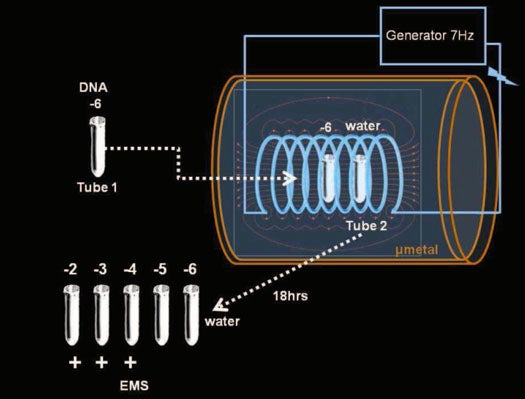 A Nobel prize winning scientist who shared the 2008 prize for medicine for his role in establishing the link between HIV and AIDS has stirred up a good deal of both interest and skepticism with his latest experimental results, which more or less show that DNA can teleport itself to distant cells via electromagnetic signals. If his results prove correct, they would shake up the foundations upon which modern chemistry rests. But plenty of Montagnier’s peers are far from convinced.

The full details of Montagnier’s experiments are not yet known, as his paper has not yet been accepted for publication. But he and his research partners have made a summary of his findings available. Essentially, they took two test tubes – one containing a fragment of DNA about 100 bases long, another containing pure water – and isolated them in a chamber that muted the earth’s natural electromagnetic field to keep it from muddying the results. The test tubes were housed within a copper coil emanating a weak electromagnetic field.

Several hours later, the contents of both test tubes were put through polymerase chain reactions to identify any remnants of DNA – a process that subjected the contents to enzymes that would make copies of any DNA fragments they found. According to Montagnier, the DNA was recovered from both tubes even though the second should have only contained water.

Montagnier and his team say this suggests DNA emits its own electromagnetic signals that imprint the DNA’s structure on other molecules (like water). Ostensibly this means DNA can project itself from one cell to the next, where copies could be made – something like quantum teleportation of genetic material, a notion that is spooky on multiple levels.

Naturally, there is plenty of skepticism to go around regarding these findings, ranging from outright dismissal to measured doubt. Indeed, it’s a pretty radical notion: DNA replicating itself through “ghost imprints” rather than the usual cellular processes. More details will emerge when the paper is published in a peer-reviewed journal, as it is likely to be. The findings will then have to be repeated in multiple independent studies to be considered valid, something that will take some time. In the meantime, expect these findings to draw equal parts intrigue and skeptical scrutiny.