A magnet-powered method of pouring beer from the bottom up that works nine times faster than traditional methods, further proof... 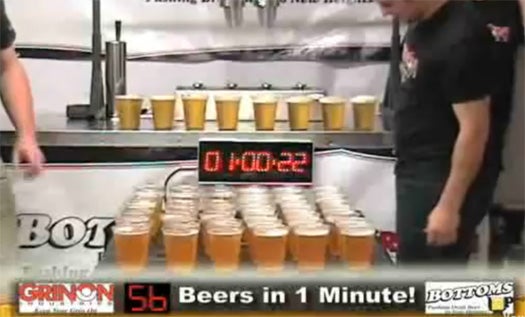 A magnet-powered method of pouring beer from the bottom up that works nine times faster than traditional methods, further proof that great ideas can be fueled by alcohol.

The cup features a small hole at the bottom, covered up by a circular magnet. Pressurized beer lifts the magnet up, filling the cup until the weight of the beer on top of the magnet pushes it back down, sealing the bottom.

This system is not only faster (serving 56 draft beers in a minute), but minimizes spilling, to the joy of sticky-footed concert-goers everywhere.

Josh Springer, head of GrinOn, was originally developing a pitcher with a latch on the bottom, but when it turned out that would cost $30,000 to develop, he switched his focus. The GrinOn cups cost only 30 cents more than normal disposable cups, and the magnets also serve as an advertising device for drunken buffoons, who steal them to put on their refrigerators. Selling that space to advertisers generates extra revenue.

After beta testing at a couple venues in Las Vegas, the distribution system is expected to be implemented at many more stadiums. It has been well received at Los Angeles Angels games and poolside at the MGM grand, providing both refreshing beverages and entertainment. Watch the GrinOn guys beat the unofficial world record for most beers poured in a minute below: