Have you ever lazily wished you could just use a tractor beam to grab that out-of-reach object? Apparently, you can.... 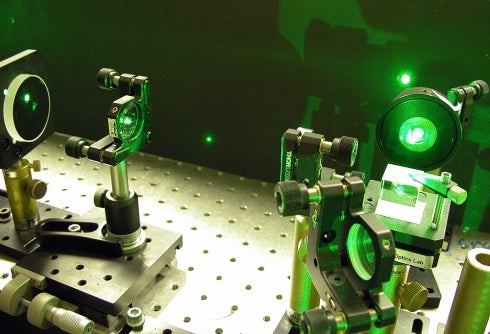 Have you ever lazily wished you could just use a tractor beam to grab that out-of-reach object? Apparently, you can.

Using only light, Australian researchers say they are able to move small particles almost five feet through the air. It’s more than 100 times the distance achieved by existing optical “tweezers,” the researchers say.

Not quite a simple grabby tractor beam, the new system works by shining a hollow laser beam at an object and taking advantage of air-temperature differences to move it around.

Moving objects with powerful light is not new — researchers have long been using optical tweezers to pluck bacteria-sized particles and move them a few millimeters. The U.S. Secretary of Energy, Steven Chu, won his Nobel Prize for work with optical tweezers. But Andrei Rhode and colleagues at the Australian National University say their new laser device can move glass objects hundreds of times bigger than bacteria, and shove them a meter and a half (5 feet) or more. Rhode says the 1.5-meter limit was only because of the size of the table where he placed his lasers — he thinks he can move objects up to 10 meters, or about 30 feet.

It works by shining a hollow laser beam around small glass particles, as Inside Science explains. The air around the particle heats up, but the hollow center of the beam stays cool. The heated air molecules keep the object balanced in the dark center. But a small amount of light sneaks into the hollow, warming the air on one side of the object and nudging it along the length of the laser beam. Researchers can change the speed and direction of the glass object by changing the lasers’ brightness.

The system needs heated air or gas to work, so in its present incarnation it wouldn’t work in space — sorry, Star Wars fans. But it could be used for a variety of purposes on Earth, like biological research or movement of hazardous materials.