New rifles with explosive rounds can be told where to detonate 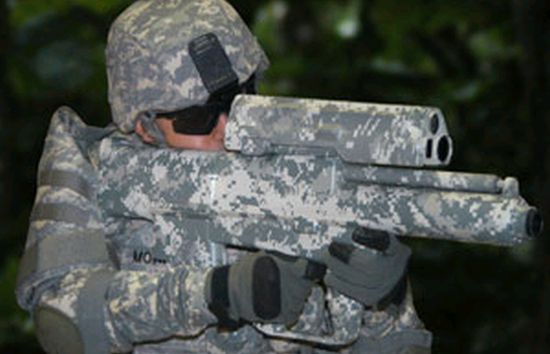 It would be hard to describe a bullet as smart, but what if that bullet was laser-guided, radio-controlled, and carried an onboard targeting CPU? The US Army has announced the creation of the XM25 rifle, which can fire a new type of explosive round that fit that exact description. Imagine the implications: hitting targets inside buildings or hiding around walls. Whoa.

First, the scope on the rifle has a laser that gauges the distance to the target. The soldier can set exactly where the 25-millimeter bullet will detonate by adding or subtracting 3 meters from that point. Then, the scope will send a radio signal to a chip inside the bullet telling it how far it should travel before exploding.

Now, here’s where things get truly nuts: Each bullet has a small magnetic transducer that interacts with the Earth’s magnetic field, generating a tiny alternating current every time it spins as it speeds toward the target. Measured against the gun’s specially calibrated rifling, this means the bullet can keep track of how far it has traveled in real time. Whoa, again.

Trenches are no longer a safe place to hide

The Army has proposed the uses can range from hitting enemies hidden in trenches (as pictured above), or even hitting a sniper hiding in a building by setting the range about a meter beyond the window. They are also proposed as a smarter alternative to grenade launchers, which can serve the same purpose but be less accurate and have limited range, making them more prone to collateral damage.

The Army will begin field tests with the XM25 system soon, with hopes of deploying it into regular duty by 2012.
New Scientist