Video: A New ‘Smart Bullet’ Deploys Fins and Guides Itself to a Laser-Designated Target

Precision guided weapons are usually the purview of larger weapons platforms, like naval vessels, combat aircraft, or assault vehicles. But... 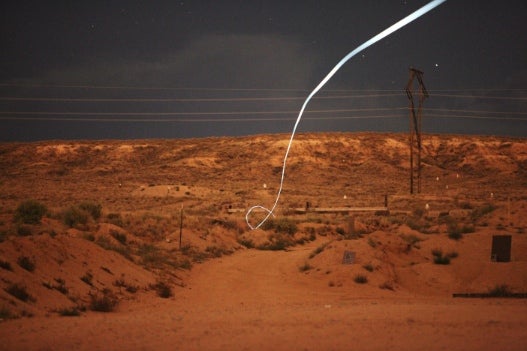 Precision guided weapons are usually the purview of larger weapons platforms, like naval vessels, combat aircraft, or assault vehicles. But a couple of Sandia National Labs engineers are bringing the guided munition down from the mountaintop and putting it into the hands of the average infantryman. The engineers have developed and patented a new breed of self-guided bullet that can navigate its way to a laser-designated target at ranges of more than a mile.

Their dart-like rifle round is designed for small-caliber firearms like those carried by the average grunt or law enforcement officer. The duo is still sorting out some engineering issues and looking for a private sector partner to help develop the guided round into a marketable product, but for now the four-inch prototype bullet is proving that smart rounds are by no mean unfeasible, or even prohibitively expensive.

Their bullet works much like a precision guided aerial bomb might function. An optical sensor in the nose of the bullet detects a laser beam painted on a target and sends that information to a guidance and control system also packed on board. An eight-bit CPU commands electromagnetic actuators to adjust tiny fins that deploy from the round immediately after it exits the muzzle. From there, the on-board electronics aerodynamically guide the bullet home to its target, allowing the shooter to adjust a round’s trajectory in flight to correct on a long shot or to stay with a moving target.

In order for a finned design to work, of course, the engineers had to dispense with some fundamentals of modern firearm design, like the rifled barrel that puts spin on conventional bullets. That spin, like a spiraling football, stabilizes conventional rounds and helps them to fly straight. The smart rounds eschew rifling and spin for the active guidance provided by the fins, and in doing so computer simulations suggest they could narrow the average margin of error on a half-mile shot from nearly 10 yards down to just 8 inches.

Meaning a “miss” on a target of any decent size–let’s say for the sake of the argument, a target the size of a grown man’s torso–would still likely result in a “hit” of some degree. The video below doesn’t go very far by way of technical explanation, but you can see the round exit the muzzle and deploy its self-guiding fins in super slow-mo.