These special Strykers will fight the enemy with photons instead of bullets. 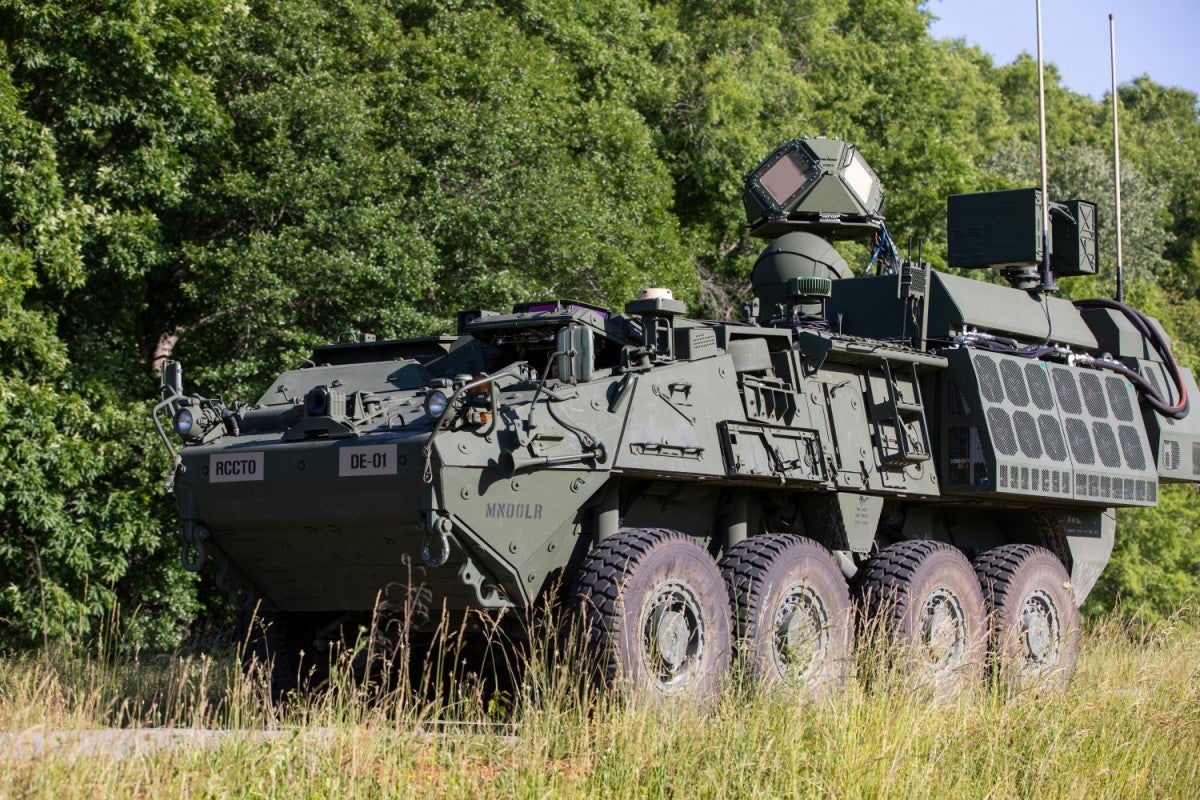 The Army will field a platoon of laser-armed fighting vehicles in January 2023, Task and Purpose reports. This platoon was originally supposed to be delivered by October 2022, but was delayed due to additional checks ensuring that the system will be fully functional when it arrives. The testing is a crucial first step towards providing an Army with a deeply protective tool that can roll into battle against drones and mortars.

One way the Army currently fights is from Stryker vehicles. These armored, eight-wheeled transports can seat up to nine soldiers inside, and can mount light weapons on turrets. In the case of the laser-armed Strykers, the light weapons are literal, and they use the heat of photons (also known as directed energy) to quickly burn through hostile targets.

A Stryker Platoon consists of four vehicles, each with a drive, commander, and a squad of infantry. That’s roughly 44 people in light armored vehicles, tasked with moving across the battlefield into a well-placed position suitable for deploying their weapons. En route and in combat, those soldiers can expect to face attack from a range of enemy weapons from indirect-fire mortar rounds to hostile drones armed with bombs or scouting for artillery.

With lasers, the Strykers will have a defense against these attacks. In proper military fashion, the ability to shoot objects out of the sky is given a big acronym: Directed Energy Maneuver-Short Range Air Defense, or DE M-SHORAD. “DE” is the laser, “maneuver” here means “on a vehicle,” and “SHORAD” is about the types and distances of targets these lasers will defeat. That’s all a bit of a complex alphabet soup, so the vehicles will be known by a more straightforward name: Guardian.

[Related: What it’s like to fire Raytheon’s powerful anti-drone laser]

“There are places where directed energy can provide a significant advantage,” Craig Robin, deputy director of the Army’s Rapid Capabilities and Critical Technologies Office’s directed energy office, said in 2021. “All the bullets are built into the system, so the logistics associated with moving a platform and supplying it requires just gas and parts.”

For the Stryker-mounted laser, the vehicle’s gas engine charges its batteries, powers its cooling system, and can power its laser. The stored energy allows the 50-kilowatt laser to fire multiple times before the system needs a recharge.

In May, laser-maker Raytheon announced that a laser mounted on an armored vehicle had successfully shot down multiple mortar rounds in testing. Mortars are common in both counter-insurgency and conventional warfare because the small and low-cost explosive rounds arc over intervening terrain, like trees and hills and buildings, crashing down onto targets from above. Mortar fire was a regular concern for forces in Afghanistan because they could bypass walls. Additionally, on-the-move mortars could destroy a vehicle and slow down a whole column.

What lasers offer is a way to destroy those rounds mid-flight. The heat of the beam can detonate the bomb in midair or melt its guiding fin, sending it on a different trajectory. A whole platoon of Stryers equipped with these lasers could have a kind of rolling protection, making such weapons that much harder to use against soldiers.

[Related: This laser-armed Stryker vehicle can shoot down drones and mortar rounds]

Lasers have already seen some use as a way to defend ships and soldiers from mortars and drones. In the right conditions, laser weapons can be effective, though dust, rain, or thick fog can all alter how well the light from these devices travels and concentrates. Destroying drones with a laser takes a matter of seconds, depending on what part of the drone is hit and the power of the laser.

Drone scouts and artillery spotters, especially low-cost drones, have proven themselves on the fields of Ukraine, as both Russian and Ukrainian forces have been utilizing commercial models to great effect. The US Army is deploying its own dedicated quadcopters, designed to match and exceed the abilities of commercial quadcopters. Lasers cannot prevent the drone from having already transmitted video or coordinates, but they can stop the drone from continuing to watch.

Before any laser-armed Strykers see action abroad, they will arrive at Fort Sill in Oklahoma. The Army has already tested the system in development exercises and demonstrations. Now, lasers can be integrated into the regular operation of the military—becoming one more tool designed to protect modern soldiers from the threats of modern warfare.