The machine, on display at an Army conference, packs a sniper-type rifle. 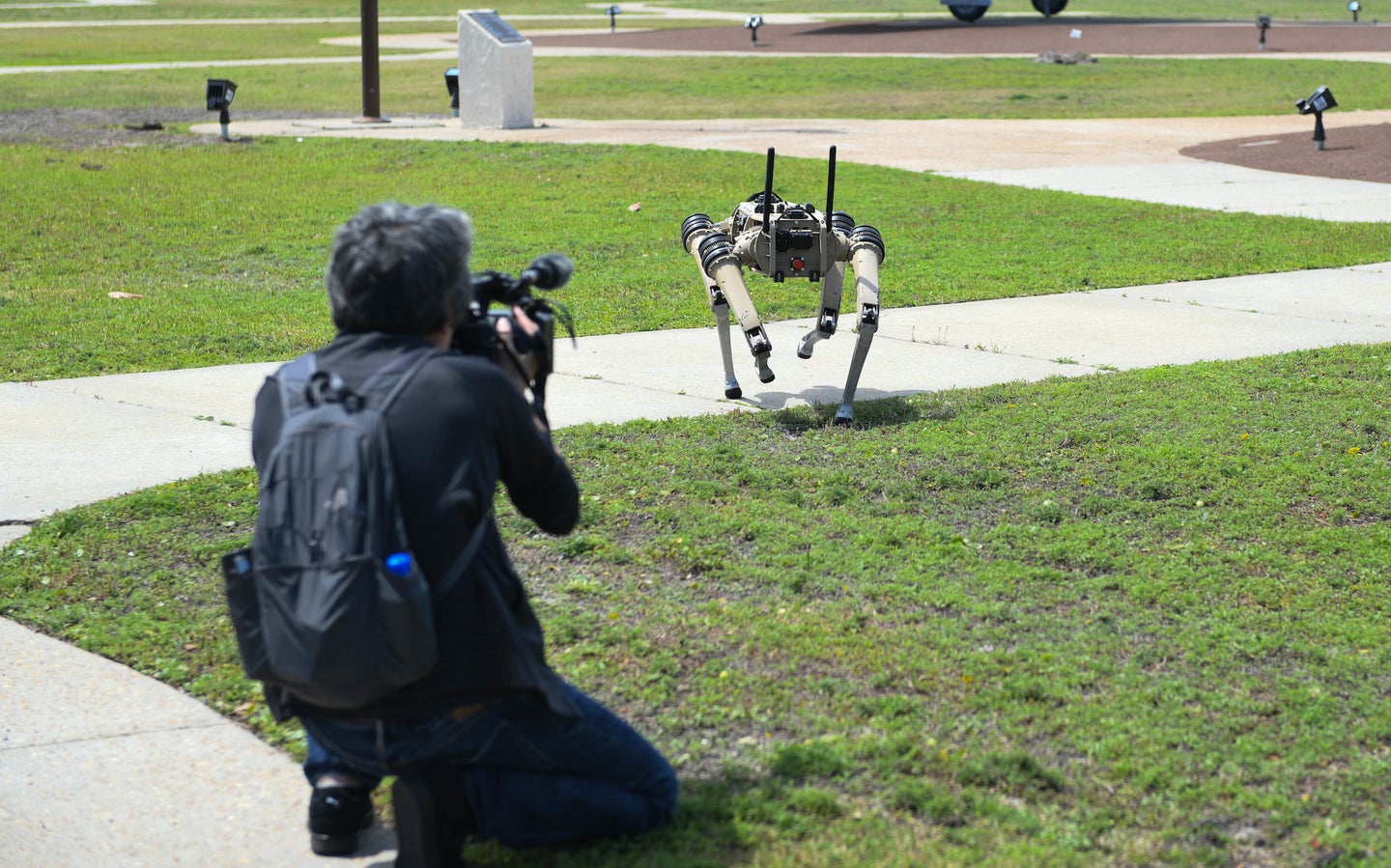 This article has been updated to incorporate more information from Ghost Robotics.

Ghost Robotics, makers of a family of four-legged robots called Q-UGVs, has made dog-like robots for the military for a few years. These robots have been seen everywhere from trade show floors in Detroit to guarding an Air Force base in Florida. But at the Association of the United States Army’s 2021 annual conference, held in Washington, DC on October 11-13, the Q-UGV on display featured a rifle mounted in a pod on its back.

The gun pod, which is attached to the robot’s torso from the center, transformed it from a biomechanical oddity into a fearsome chimera, a weapon more familiar to the world of video games than a real one on a battlefield.

“Robots That Feel the World™” reads the brief display for Ghost Robotics at AUSA. The copy continues, referring to the robots as “Agile & unstoppable ruggedized ground drones with legs (Q-UGV™)” that can be used “for a broad range of military and homeland security applications.” (Q-UGV stands for quadrupedal uncrewed ground vehicle.)

Those applications, packed into dense jargon-rich phrases, start with “ISR/Comms,” or intelligence, surveillance, reconnaissance, and communications. All of these are tasks that a robot dog, equipped with cameras and other sensors, can do well, provided a human operator is on hand with a tablet to receive the communications and scouting.

The Q-UGV is also pitched as useful for “Perimeter Security,” or patrolling a base, “EOD,” or “explosive ordnance disposal,” and “CBRN,” or “Chemical, biological, radiological and nuclear defence.” While EOD deals with small explosions and CBRN potentially deals with very large ones (or other hazards, such as chemical weapons), both are circumstances where having a robot deal with something deadly to humans can be lifesaving. Even if it’s just taking a first look at a roadside bomb, or using chemical sniffers to determine if a hazardous chemical is present in the air, it’s much better to have a robot take on the immediate risk.

But while some tasks seem like a good fit for a robot to reduce risk to humans, the signature innovation on display at the AUSA floor turned the robot into a threat. The Q-UGV is also listed as offering one other essential military function: “lethality.”

Starting in 2017, under Secretary of Defense James Mattis, “Lethality” became a focal point of military product marketing. Whereas in the past, military contractors would talk about how a weapon allows soldiers to meet mission objectives or protects the warfighter, “lethality” as a new buzzword meant everything had to be explained in terms of that ultimate military objective: killing people, in accordance with the laws of war and the task assigned.

In the case of the Q-UGV, lethality is straightforward. It means putting a gun on a robot dog.

Built by SWORD International, a Nevada-based specialty rifle firm, the gun on the Q-UGV uses 6.5mm Creedmoor ammo. With a relatively new caliber, first developed in the 2000s, the Creedmoor can fit into the same magazines as the 7.62mm NATO cartridge, though it needs to be fired out of a different barrel. With the 6.5 Creedmoor, Ghost promises the gun can offer precision fire at distances of over 3,900 feet.

Designed for sport shooting targets at long range, the bullet allowed for a long-range performance from both dedicated sniper rifles and standard infantry rifles, and gave them increased accuracy. The Creedmoor has been adopted by both the Department of Homeland Security and Special Operations snipers, and its use on the Q-UGV is similar.

In other words: This robot dog is built not just as a scout, but as a scout sniper.

[Related: Robot Dogs Can Now Have 6.5mm Assault Rifles Mounted On Their Backs]

What remains to be seen is how much autonomy this armed robot dog might have in the field—a key consideration when the bot has a gun onboard. Scouting functions, where the robot is just a mobile platform covered in sensors, are great tasks to automate. Navigating a robot is time- and labor-intensive, especially if it needs to be directly piloted. Moving that to a machine-run process, with a human supervisor checking in to see what the robot has sent back, lets the robot collect useful information without tying down soldiers.

Putting a gun on the robot almost certainly requires bringing the human operator back into direct control over the machine, responsible for aiming and authorizing shots. That could still prove to be a battlefield boon. If the Q-UGV can get into a difficult-to-reach position, it could set up an ambush. With an armed robot drawing fire, human soldiers could maneuver into better positions and enemies waste ammunition tracking down a robot. In short, on the immediate level of what helps give an edge in a firefight, a gun firing from the back of a waist-height robot gives a squad commander a host of options.

What remains to be seen is the degree to which a human will be in control over the robot’s operation, its targeting, and its firing. Because that kind of communication needs to happen over air waves, it is possible a foe could jam the signal or feed the robot false information, turning the robot from an advantage into a liability.

The Q-UGV’s quadrupedal appearance is unsettling, but the greater implications of arming a semi-autonomous dog-shaped robot are much more unsettling, because it turns the robot into a sniper rifle piloted by humans. Or worse, one that isn’t. (Update on Oct. 19: Ghost Robotics says both the weapon and the Q-UGV have to be manually operated, and that what limited autonomy the Q-UGV has is focused on obstacle avoidance and waypoint navigation.)

Ghost Robotics did not immediately return a request for comment by the time of publication.