Military-style meals are scarce, because last month was just awful 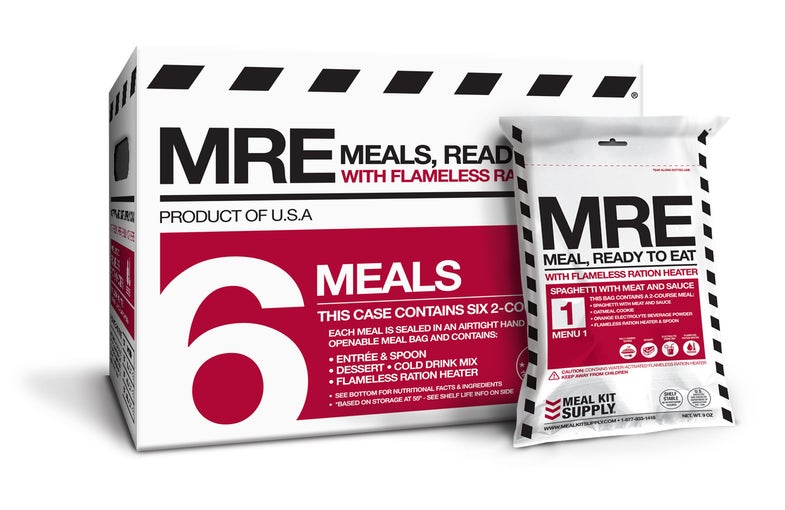 First Harvey flooded Houston, then Irma slammed Florida. Mother Nature’s one-two punch catalyzed a run on MREs, which is military speak for “Meal, Ready-to-Eat”; they’re bags of sustenance manufactured to have a long shelf-life and usually include a water-activated chemical heater to warm up the grub. While MREs are made for the military, regular disaster-conscious people and apocalypse-preppers can purchase civilian versions of them for their storm shelters from companies like Meal Kit Supply, a major distributor.

Blair Calder, the president of Meal Kit Supply, says that business has been hectic. “After Harvey, I think that a lot of people took preparedness a lot more seriously,” he says. “Leading up to Harvey, we saw a typical increase that we would get before any incoming storm.” His company sent out a “surge of supplies” for relief operations in Texas after that tempest.

“Then, when Irma was forecasted to hit Florida, it just became an overwhelming deluge of orders, and we just sold out in a matter of days,” he adds. “We had to turn a lot of people away, too, which is really unfortunate.”

“It’s the coverage of Harvey,” he notes, “that spiked the interest for preparing for Irma.”

Meal Kit Supply—which offers menus like beef taco, spaghetti with meat sauce, and sausage patty with hash browns— buys their MREs from three big companies that manufacture them for the U.S. government: Sopakco, AmeriQual, and Wornick Foods. “When there is a disaster, FEMA, as part of their contract, essentially take over those operations,” Calder says. “Everyone else gets pushed back in their production.” After FEMA gets what they need, Meal Kit Supply—whose inventory of MREs is currently nil—can receive more of them and fill the preorders they’re getting now, he says.

The manufacturing companies themselves also offer versions of MREs for civilians—Sopakco hawks a meal-in-a-bag called SurePack, and AmeriQual vends APacks. The latter’s cuisine options include “Menu 5,” which is “Sweet and Sour Sauce with Rice and Chicken,” and “Menu 6,” which is “Pasta with Garden Vegetables in Tomato Sauce.” But both SurePacks and APacks are currently sold out, representatives at the companies confirmed.

There are other options out there for disaster-conscious people who want a meal with a military vibe. A company called MRE Star sells them too, independently of manufacturers like AmeriQual and Wornick Foods. Ken Lester, the operations manager at MRE Star, says that they’ve been busy and simply can’t fulfill very large orders.

Of course, you don’t have to shell out for zombie-apocalypse-style military-esque meals from companies like those to get ready for a disaster. MREs consist of sealed food packages (and extras like drink mix) that you can just rip open—but you can find tuna in a pouch at your grocery store. Or you can just go with good ol’ canned comfort food, like Spaghettios, but without the warming capabilities of the chemical heater that comes with an MRE, or a camping stove, be prepared to eat it cold. (Bon appetit.)

“The time to prepare is now,” Calder, of Meal Kit Supply, reflects. In other words, stock up before the rush. A 12-count box of MREs from his company costs $130, and each one packs in at least 1,200 calories in total; they advertise a five-year shelf-life if kept in the right conditions. And don’t forget water: squirrel away a minimum of one gallon, per person, per day.