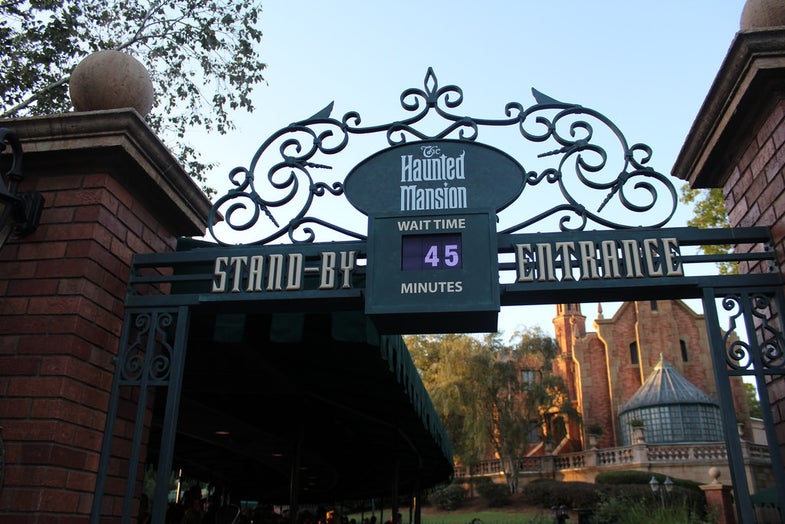 Out there, beyond the anthropomorphic mice and never-ending queues is a man who is quietly trying to disrupt your next vacation to Disney’s Magic Kingdom. His name is Len Testa and his annual subscription-based service, Touring Plans, will predict how long you’ll wait at any ride, any time of day, any day of the year for $14.95—less than the price of a giant turkey leg and a Dole Whip.

With statisticians, programmers and data scientists among its eight full-time staff members and dozen part-time employees, Touring Plan upends trips to Disneyland, Walt Disney World and Universal Orlando resorts with customizable itineraries centered around how to smartly skip the lines at every single theme park. In addition to optimizing which time to board each attraction with its Touring Plans itinerary guides, their free-with-subscription app, Lines, says how long you’ll actually wait in every line, and the freakishly accurate Crowd Calendar recommends the best times to book a trip, even displaying how busy each theme park will be in advance.

Sounds more magical than the last time you met Cinderella in the sweltering Florida sun? Oh, it is. The various arms of Touring Plans are made possible due to its tour-de-force system, which harnesses 600 features and updates every few minutes to determine the most accurate wait times. Touring Plans goes beyond factoring in rudimentary information like Christmastime and special on-site events, adding data sets on everything from Jewish holidays to the hourly capacity impact caused by rides that are closed or temporarily broken down.

Instead of simply considering spring break, they pull information for the hundred largest K-12 public school systems in the country and pair it with data from the Orlando Visitor Convention Bureau on where families are visiting from to determine the true impact of schools being out of session on the theme parks. The automated algorithmic model dives deep into economic considerations, too, using unemployment rate, consumer price index and inflation rate in Mexico, UK, Canada, US, and Brazil over the past 60, 90 and 180 days. That’s because today’s visitors to Walt Disney World likely booked their vacation months ago, and the state of the economy at that time can aid in predicting how busy the parks are now. Touring Plans even goes one step further, looking at not just U.S. unemployment rates but the unemployment rates for South Atlantic states, which account for most of Walt Disney World’s visitors.

All of Touring Plans’ products hinge on the idea that when you know how many people are in line, you can deduce how many are in the park. So, by running its algorithmic model, Touring Plans can accurately predict how overwhelming the crowds will feel, which park will have the shortest lines and even what you should ride at Epcot at 11:05am three months from now.

Disney does not release crowd data to the public, so it helps, of course, that Testa’s empire is wholly synergistic. While following a Touring Plans itinerary within the Lines app, park-goers clock how long they actually waited for rides like Space Mountain or Test Track, sending of-the-minute data from 140,000 annual subscribers, which puts a few hundred in the parks each day. With 8,000 additional wait times clocked daily, it’s this kind of historical data that sets Testa’s theme park empire apart. (Touring Plans’ scheduling system even has its own patent.)

Never-ending lines are such a hindrance to theme park enjoyment that both Disney and Universal parks have made strides to eradicate them. Disneyland’s FastPass program and Walt Disney World’s FastPass+ online booking system allows guests to “skip the line” on certain attractions throughout the parks, with Universal Studios Hollywood and Universal Orlando Resort’s for-purchase Express Pass doing the same. Universal Orlando has even begun enabling a “Virtual Line” on newer attractions, with its third theme park, Volcano Bay, going fully queue-less.

With all that time freed up to wander the parks — Touring Plans boasts saving users up to four hours in line each day — you may be wondering where to dine, drink or stay. Good thing there’s a data set for that, too: guest feedback. Testa co-authors The Unofficial Guide to Walt Disney World, which reprints annually and gathers hundreds of thousands of reader surveys, outlining trends among some of the resort’s most passionate guests.

What can one learn from the man harnessing all the available Disney data? Plenty. Here’s what we found most interesting:

Because of Touring Plans, It’s someone’s full-time job to hang out in Disneyland

His name is Guy, and he’s the eyes and Mouse-shaped ears of the operation. If a ride breaks down, an unexpected tour group floods the park or a wait time looks curiously wrong, he’ll assess it first-hand, even hopping in line to time the waits himself. This way, Testa explains, “we can instantly change the software to accommodate all the people who are in the parks every day.”

On rare occasions, wait times will be deliberately inflated to steer guests to other areas of the park, but they’re usually wrong due to how they’re measured. If a theme park clocks someone’s wait in line from start to finish as forty minutes, the current wait for the attraction wouldn’t be forty minutes, despite that being posted. In actuality, that’s what the wait was if you got in line forty minute ago. Testa’s system accounts for this with an “intraday adjustment”, giving Touring Plans times more accuracy in its “actual wait” times.

The data set that most surprised Testa? Sunset

When Disney’s Animal Kingdom added nighttime hours last spring, it created an evening version of its popular Kilimanjaro Safaris attraction that began at nightfall. Touring Plans added in astronomical data to track the line into the night, and discovered the time of sunset can also predict how long you’ll wait after dark. “People use sunset as a visual cue that the day has come to an end,” he said, explaining that when the sun sets later, lines will be lengthy for longer.

The Lines app is ugly, but for good reason

As an all-text platform, the design of Lines is a bit of a snooze, but it was specifically developed to use minimal battery, require less data and most importantly, work in the Florida sun “The number one knock on our app is that it looks bad, but it looks bad for a reason, because it’s supposed to work in the park,” laughed Testa. “We spent a lot of time making that thing ugly!”