How artificial intelligence could help spies do their jobs

When the intelligence analyst is an algorithm. 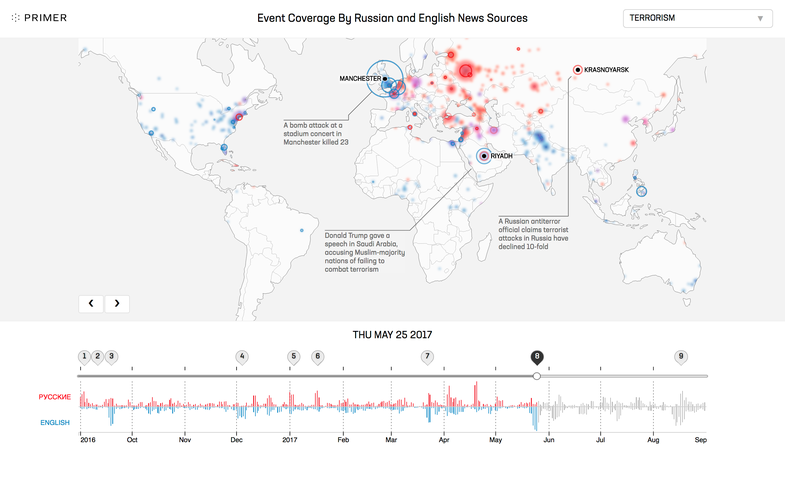 Consider the job of an intelligence analyst—someone who has to sift through vast amounts of information and figure out the bigger narrative. The raw data this hypothetical analyst looks at could be anything from a report on the ground, to government statements, to items in the local media. The analyst’s job—looking at data, synthesizing it in a report—is rich territory for artificial intelligence to help out, according to a new company called Primer.

Primer has developed an AI system that’s in part intended to augment the job of an intelligence analyst at a spy agency. Intelligence isn’t the only field they’re working in—their partners include Walmart and a sovereign wealth fund in Singapore—but it’s perhaps the most intriguing.

An intelligence analyst’s mission “is to make sense of the world around you,” says Sean Gourley, Primer’s founder and CEO. That could mean “monitoring the data feed that you have coming through” and trying to pick out the significant events in a region you already know well. Or, it could entail rapidly learning about “a new organization, or new part of the world that you’ve been called into, to quickly become an expert.”

Primer takes both the reading of that information, as well the writing of the report, and automates the processes using AI. In other words, the kind of work-intensive task that an office might relegate to a junior researcher—read all this, write up a summary, and put it on my desk!—Primer will do.

“We want to be able to take that process, and write that first draft,” he adds, “so that the analyst, when they sit down, instead of being confronted by a stream of hundreds of documents, is confronted by a draft of a report that they can ultimately edit themselves.” In short, the AI is creating the initial version of a report, and unlike a human, it doesn’t get tired and won’t miss details it has been programmed to catch. In-Q-Tel, an organization that works as a bridge between American intelligence agencies and startups, has invested in Primer.

Artificial intelligence systems excel at handling vast amounts of information. Machine learning algorithms efficiently power tasks like language translation on Facebook, for example—of course, you couldn’t have a human translate every Facebook post or comment from one language into another, nor would you want someone sorting through photographs looking for cat pics. Instead, researchers train algorithms and neural networks by feeding them data and letting them learn from it.

Primer isn’t the only company out there using AI to make sense of data, which in their case, also includes publicly-available information, like financial news and media reports. Veritone, another company in a similar space, specializes in dealing with unstructured data like audio and video files. They offer over 100 different AI engines that focus on different tasks, like audio transcription, analyzing the sentiment the speakers express in that transcription, logo recognition, or detecting faces in video. A client—CNBC is one of them— might hire their system to watch a bunch of video and pick out appearances of a specific product logo, for example, or listen for the political leanings of what is being said.

The idea of AI playing a role in synthesizing intelligence and writing reports would likely be enough to give shivers to the likes of Elon Musk (who likes to warn about “AI safety”), but Gourley says the methodology will be transparent to those who use it. “One of the fundamental tenets of what we build, and how we build our AI systems here, is that it’s always interpretable,” he says. “It always links back to the original sources, and it always communicates to the user both what data was used as an input to make the decision, and also how it go there.”

“Because there are consequences to decisions that are made on top of this intelligence system,” he adds. “You do have to design around that, and it’s absolutely possible to do that. And that’s very important for us.”