The head of the U.S.’s largest mosquito control program has science on her side

And thank goodness for that. 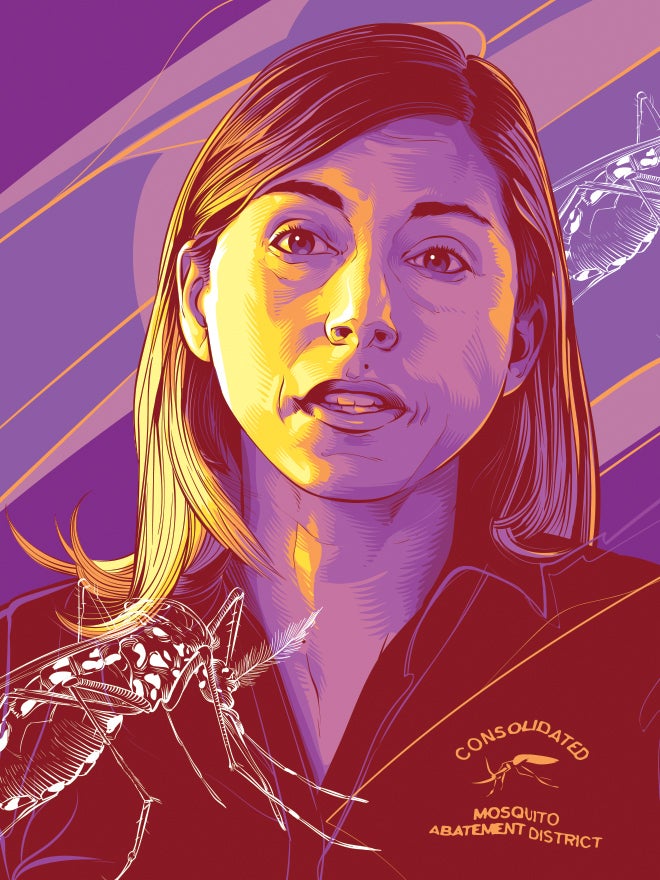 There are more than 3,000 species of mosquitoes in the world, and if Jodi Holeman could, she’d catch one of each. She can identify the bugs down to the genus, and usually the species, by sight. She has only 19 kinds pinned in her collection but carries plastic bags wherever she goes so she can capture more. Though it’s unlikely a new variety will pop up as she jogs through the backwoods of Clovis, California, where she resides, Holeman says, “You don’t know what you’ll find if you don’t bother to look.”

Holeman has more than a personal interest in these pests. She’s the scientific-technical services director at Fresno County’s Consolidated Mosquito Abatement District and leads the field team of Debug Fresno, the largest experimental mosquito sterilization and control program in the United States. Debug Fresno aims to decrease the county’s invasive Aedes aegypti population, whose females bite and can carry the Zika virus and yellow fever. The winged aggressors have not been responsible for any illness in her area so far, but the possibility of active infection is “always in the back of our minds,” she says.

County health officials first detected A. aegypti in 2013, and since then, their numbers have surged. The district found help this year by partnering on Debug Fresno with Verily, a health-focused subsidiary of Alphabet. Verily raises batches of male A. aegypti and infects them with the bacteria Wolbachia pipientis. Females that mate with these males produce eggs that never hatch, thereby reducing the mosquito population, number of bites, and risk of human illness. Holeman’s team at Debug Fresno released more than 1 million Wolbachia-­infected males weekly for 20 weeks, automatically dispensing them out the open window of a van that cruised through targeted neighborhoods.

Holeman has been passionate about helping area residents since earning a biology degree at California State University at Fresno nearly 15 years ago, when she began working for the district. Still, it was an unexpected career path. She originally wanted to become a veterinarian, and reluctantly took an entomology class to fulfill a requirement. When the professor spoke of mice “screaming” during an experiment, Holeman’s perspective shifted. Bugs, unlike most creatures, don’t have pain receptors. Entomology allowed her to work with animals without causing suffering.

Holeman hopes that Debug Fresno can hit its year-end target of reducing the local female A. aegypti population by at least 90 percent. The data so far looks “promising,” she says. Ever the critter lover, Holeman points out that in mosquito control, “we tend not to say the word ‘eliminate,'” but she wouldn’t be upset if this non-native bug disappeared from the county she calls home.