What Is A Gyrocopter And Why Did This Man Land One On The Capitol Lawn? 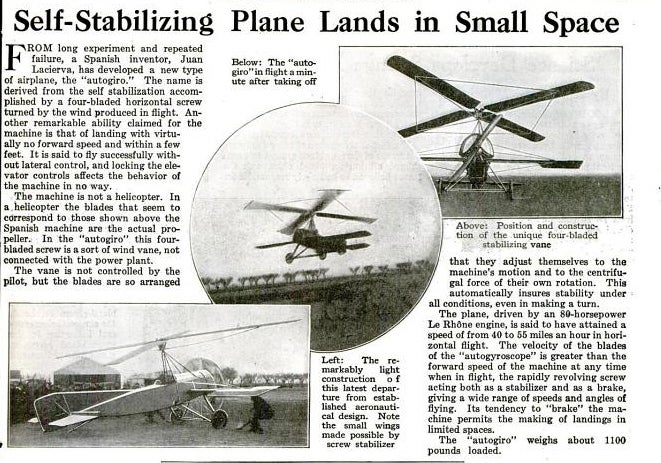 Earlier today, a postman from Ruskin, Florida, landed a gyrocopter on the east lawn of the United States Capitol building. Doug Hughes claimed his flight was intended as a nonviolent protest against corruption, and shortly after landing he was apprehended by police. The airspace over Washington DC is specifically restricted by the FAA, and aircraft that violate it risk being shot down in the air and their pilots arrested on the ground. That’s true even if someone if flying as weird a vehicle as a gyrocopter.

Known variously as an autogyro, gyro-plane, autogiro, or gyrocopter, these weird planes look like the half-formed child of a helicopter and an airplane. Popular Science has been writing about the craft since the first-ever autogiro flight) and for 92 years since, including modern unmanned versions. The planes lack traditional fixed wings, instead relying on a spinning blade above the craft to provide lift, and usually a propeller engine provides thrust. Hughes’ gyrocopter was a pusher-prop, but some of the earliest models put the propeller in the front.

Autogiros were invented in Spain in the early 1920s by Juan de la Cierva. Initial testing began in 1920, and he first successfully flew in 1923. The rotor spun and wobbled as the plane flew, with the forward-moving blade higher and the backwards-moving blade lower. A spinning rotor provided a couple advantages over a fixed wing: provided the plane was moving, the rotor won’t stall. Another advantage is that gyrocopters require much shorter runways than fixed-wing planes, and even shorter ones for landing.

Today, many gyrocopters are built from kits by hobbyists. If they’re light enough, they are governed by the FAA’s rules on ultralight and amateur-built aircraft. Hughes himself did this, transporting his gyrocopter by trailer from Florida to Washington. His craft resembles a Bensen B-8 or a Brock KB-2 autogryo. Modern autogyros are also remarkably slow for planes, with an FAA-mandated top speed of no more than 63 mph. Of course, the same law governing ultralight aircraft notes that “No person may operate an ultralight vehicle over any congested area of a city, town, or settlement, or over any open air assembly of persons.”

Ultralights also typically operate in the low sky, above 500 feet everywhere and 1000 feet in congested areas. Drones typically operate below 400, though not always. And thanks to their low cost and basic construction, ultralights predate drones as cheap border-hopping vehicles for drug smuggling. While they’re limited in carrying capacity and speed, ultralights are tricky enough for radar to spot that in 2012 the Department of Homeland Security gave a $100 million contract to a company developing radar specifically to look for ultralights.

Completing the weird 1920s throwback that is an autogyro landing, one radar that might spot such small aerial interlopers in the future is the radar on these tethered blimps. In response to the flight this afternoon, the FAA released this statement:

Watch the gyrocopter land on the Capitol lawn below: