Star Wars: Squadrons is fun on consoles, but VR is where it shines

The $40 game is the laser-blasting space ship game that’s fun even for non-fans. 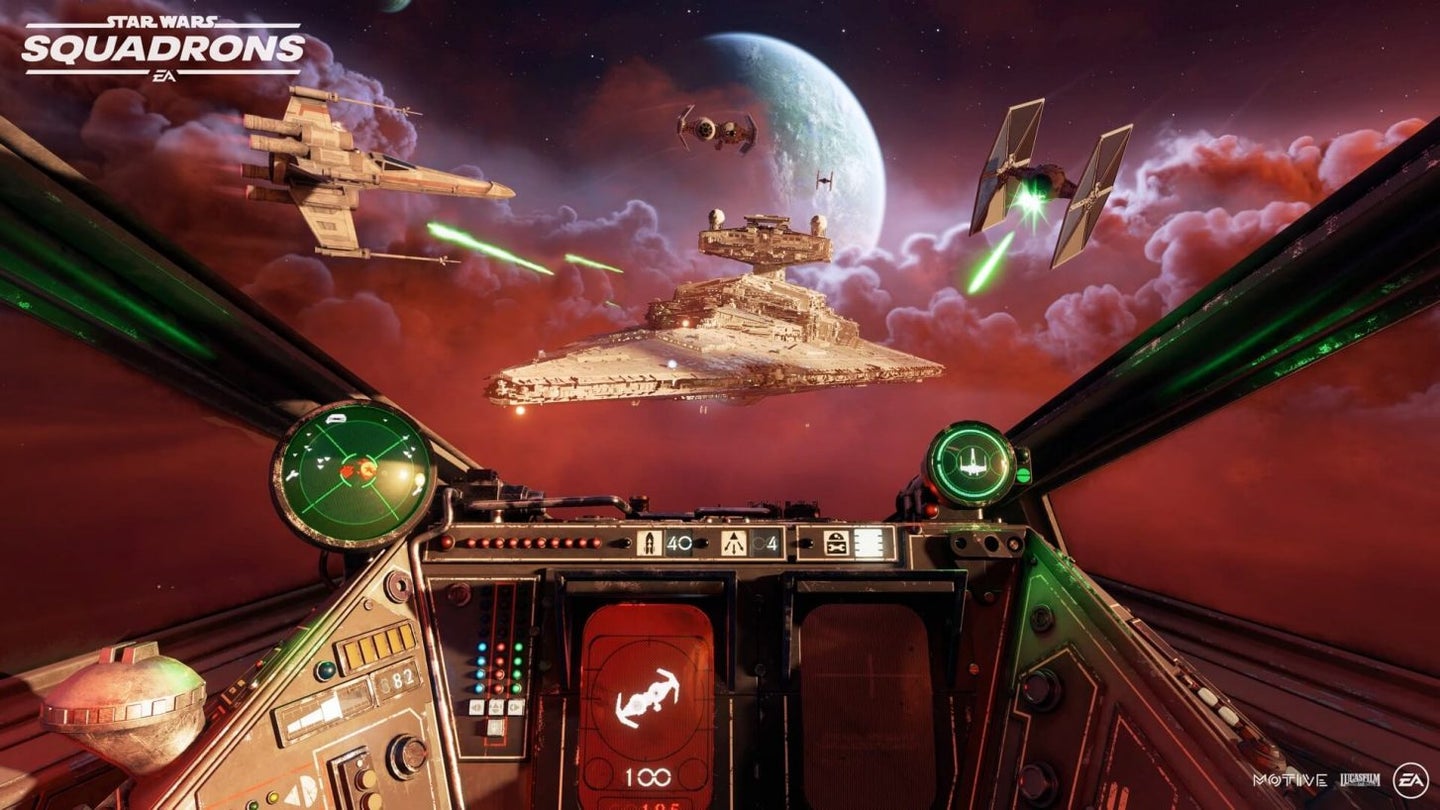 During early play, sometimes it's fun to just look around from the cockpit of your ship. EA
SHARE

I don’t love Star Wars. That’s not a brag and I don’t consider it a character flaw, but it can make evaluating pop culture objects related to George Lucas’s storied franchise difficult. When the the trailer for Star Wars: Squadrons debuted earlier this year, however, I was intrigued. I hoped the simple premise of “get in a spaceship and blast other spaceships out of the sky,” would transcend my lack of fandom and reward me with the kind of game that makes high-end VR rigs worth the cost and hassle. That hope came true.

Squadrons puts players directly in the cockpit of one of four types of ship. You can play with a high-end VR headset that runs off of a gaming PC like the Valve Index, the HTC Vive, or the Oculus. But, it’s also available for play on a typical screen—you don’t need a headset at all if you don’t want.

The ship classes likely match what you’d expect from a game like this. Want to do more damage? Your craft isn’t going to be very fast or nimble. Want to pull off acrobatic maneuvers? You won’t be able to inflict the same kind of sledgehammer damage as your slower teammates. And, of course, you can play support if you’re the helpful type. Once you’re in a class, you can modify your ship, which makes locking into one lane a little less difficult.

The game’s marquis gameplay mode is called fleet battle—it’s an objective-based game that happens in stages and involves trying to attack the other team’s main ship while protecting your own. It feels very familiar in its form. If you don’t want to commit to a larger battle, you can also run one-off death matches and shorter objective-based games where you work with your team to accomplish a mission.

The first time you play—in fact, the first dozen times you play—the controls and the graphics are enough to keep you entertained. There are several learning curves that you’ll have to navigate while getting into the game. At first, just flying the ship where you want it to go is challenging enough. Then, you have to start paying attention to the details like shield levels. The last piece of the puzzle involves putting together a coherent strategy. “Fly around and shoot stuff” is fun for a while, but the appeal quickly fades once you start losing all the time to teams with actual plans.

Whatever you do, don’t skip the training modes. They take a while—at least it feels long when you’re itching to get out there and laser other pilots. But, go through the tutorial and pay attention. It’ll pay off almost immediately. Even if you’re not playing in VR, using a keyboard over a controller will probably be much easier to learn and improve with. Controllers are great, but the fast-twitch sticks don’t always lend themselves to these kinds of precision maneuvers.

Overall, it’s absurdly fun. After you’ve played the maps a bunch of times, you’ll start to burn them out for yourself. But, that happens with with any map-based game eventually. I didn’t even bother trying to rank up in the ladder because I know my skills are lacking, but that is an option if you’re the competitive type.

I was mostly glad to finally get the “pew pew” spaceship game I’ve wanted from VR. Even without even the most basic Star Wars knowledge I could sit int he cockpit and blast away at what I imagine are the bad guys.

EA, the studio behind the game, says that it won’t offer future content for Squadrons, so once you’re sick of it, you can’t count on any downloadable content coming down the road to freshen things up. I enjoyed the game a lot more in VR than I did playing it like a regular PC game on my flat, non-face-mounted screen. But, at $40 with no DLC coming down the line, it’s still a lot of fun compared to its cost.

It’s almost fun enough for me to start exploring other parts of the Star Wars pop culture universe—almost.