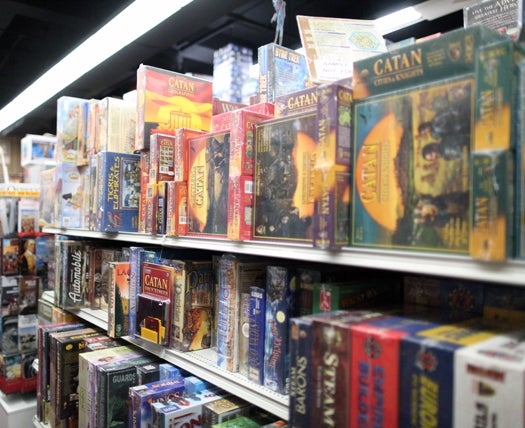 German- or Euro-style board games–the best-known of which is probably Settlers of Catan, at least here in the States–are a revolution in analog gaming. They’re everything Monopoly is not: often simple but fiendishly clever, designed with a minimum of boring down-time and a maximum of player interaction, without the indignity of getting eliminated or the any semblance of luck. (Dice are pretty much verboten in these games.)

A Euro-style game fan I spoke to referred to Monopoly, Life, and the like as “Amero-trash games.”

Settlers of Catan originated in Germany, as did most of the rest of its ilk; Germans are famously crazy about board games, and mainstream German magazines often review games along with new movies and music releases. It’s rare for Americans to seek out new games; we tend to have our mainstays, our Trivial Pursuit and our Scrabble and our Risk, but Germans are always experimenting, creating, and trying new games. There’s even an award for games, the much-coveted annual Spiel des Jahres.

The games themselves are totally different, too: they’re tightly designed (these games are also sometimes called “designer games”), and the designers become minor celebrities. Game creators like Reiner Knizia, Klaus Teuber, and Wolfgang Kramer create dozens or even hundreds of games, and their names are stamped on the box in the same way a movie might have the director’s name in large type. In the past five or ten years, these games have started to take hold in the States, and they’re causing Americans to see board games in a totally new light. They’re not just for family game night anymore; these are difficult, interactive, strategic, and super fun games, and there are always more to discover.

I spoke to Daniel R. Nelon, from Seattle’s famed Card Kingdom–it’s housed in a former BMW showroom, hosts tournaments, has a cafe and bar attached, and is stubbornly located on the opposite coast from us at PopSci headquarters in New York City–to get an expert’s point of view on the history of the games. He was also nice enough to provide a primer for beginning, intermediate, and expert players.

PopSci: So what makes a German-style board game?

Daniel R. Nelon: A Euro-game has little to nothing in the way of chance mechanisms, so there’s very little luck involved. They tend to stick to wooden pieces over plastic, it’s their preference. There’s very little text on the board; only the rules have text on them, so you can actually play with people who speak other languages as long as you both already know how to play. They tend to value economics [themes] over military, and one of the most interesting things about [this style] is that there’s no player elimination, so when people are playing the game, everyone is in it until the game is finally over. So nobody’s sitting around waiting for the game to end.

Another really nice thing about Euro-style games is there’s usually a nice catch-up mechanic, where if you are falling behind, there are other ways to catch up. So there’s not necessarily always a runaway player.

PS: A friend of mine told me about playing in a Settlers of Catan tournament in which he pulled way ahead and got embargoed by the other players–they all stopped trading with him.

DRN: Yeah, that’s what’s interesting about Settlers of Catan, there’s that trading aspect which allows everyone to be interactive during everyone else’s turn, which a lot of Euro-style games focus on. So there’s not a lot of down-time waiting for your turn.

It’s interesting that those subjects are not inherently appealing to too many people, but these games are so popular.

DRN: Oh, definitely. I get that a lot from customers who come in and aren’t traditionally gamers. There are games that we at the store consider “gateway games,” and Settlers of Catan is definitely one of them. [Catan] was published in 1995, and it spread like wildfire, and now we’re starting to get to the point where _Settlers is replacing the normal household games, replacing Monopoly of Life. You can find it on peoples’ shelves who aren’t really gamers.

PS: When did you first start to see German- or Euro-style games pop up?

DRN: Euro games started getting popular around the ’80s, that was when the rest of the world started to take notice of them. But one of the things that really helped open the world up to German- and Euro-style gaming was the internet. Before the internet, people didn’t really know what other countries were playing or what kinds of games there were. One of the things people were really trying to do in the ’80s was import games over here.

Then there were publications like Mike Siggins’ SUMO, a quarterly publication focused on reviews and English translations of German games. Games at the time were mostly appealing to war-gamers and strategy gamers, things like Advanced Squad Leader.

At that time, a lot of the American games were kind of falling short–they were too light for war and RPG fans, and a little too dense to be family games. So when people started learning about other games [thanks to the internet], certain games started coming to light, like Scotland Yard, Metropolis, and Die Macher.

PS: Are those games still around?

DRN: Yes, those are still in print, which is surprising because in the board game world, most games don’t actually stay in print all that long. 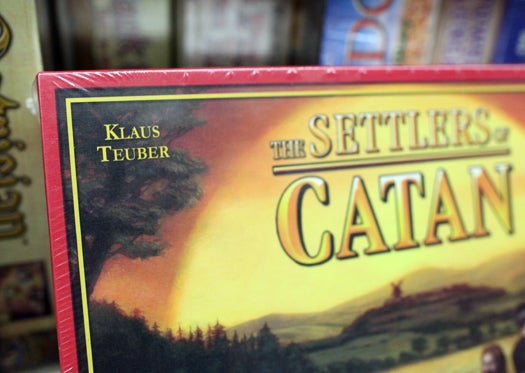 Euro-style games usually include the name of the designer prominently on the packaging.

For the beginner: “I usually send them to the more popular games, not because it’s popular, but because they’re easy to learn and they get non-gamers into gaming, basically. The three I usually rely on are Carcassonne, Settlers of Catan, and Dominion. Those are the three best-selling games in the store. Most of the time when I suggest those games, they come back for expansions or they want something similar to those games.”

Something “similar, but a little overlooked,” says Daniel, “is a game called Cartagena. It’s based a famous escape from an impenetrable prison in I think the 1600s [ed. note: it was the 1672 pirate-led prison break].”

Daniel also mentioned Ticket to Ride more than once–it’s a game in which you try to navigate a complicated train system. Like almost all of this style of game, Daniel promised that it’s much more fun than it sounds.

For the intermediate: “I would usually go with a game like Blue Moon City, which is a beautiful game, component-wise–the artwork is really great–and it’s actually a Reiner Knizia game too.” It’s kind of a post-apocalyptic game in which you try to rebuild a city according to the guidelines of the dragon overlords. “I haven’t had anybody dislike that game,” says Daniel.

Dungeon Petz is another one Daniel likes. “It’s a worker placement game, it takes a little while to learn and about two, two-and-a-half hours to play, but it’s very, very entertaining. But what’s fun is that you’re dealing with entities on the board that behave on their own.” You have to raise the pets on the board, keeping them entertained and fed and contained (they can be destructive if allowed to break out of their cages).

Kingdom Builder, from the same designer as the wildly popular Dominion, is another good one. “The cool thing about it is that it’s very easy to play. It is strategic, but it’s not going to be too confusing for people. A family could play it, and a game lasts about 20 minutes, and it has very high replayability.”

For the expert: “I’d recommend a game called Mage Knight: The Board Game. It’s based on an old tabletop miniature game but it has really nothing to do with it aside from theme. This game is fantastic. I’m a little biased towards it because I think it’s one of the best games to come out in the past five years. It’s not very popular yet, and it’s a little more difficult to find, but they’re about to do a reprinting in the next few months.”

“The board is modular; it has tiles you lay out as you explore. So the more you explore and wander, the bigger the board will get. It has a similar mechanic to Fable, so you basically get to decide if you want to be a bad-ass, really evil, or if you want to be good and noble. But you’re not punished for being evil or rewarded for being good, necessarily.” It’s a deck-building game, in which your deck is determined by your behavior. It’s also not for the faint of heart; Daniel describes the rulebook as “basically a short novel,” but says it’s also the game he currently plays the most.