It’s lighter, faster, and considerably cheaper than its predecessor. 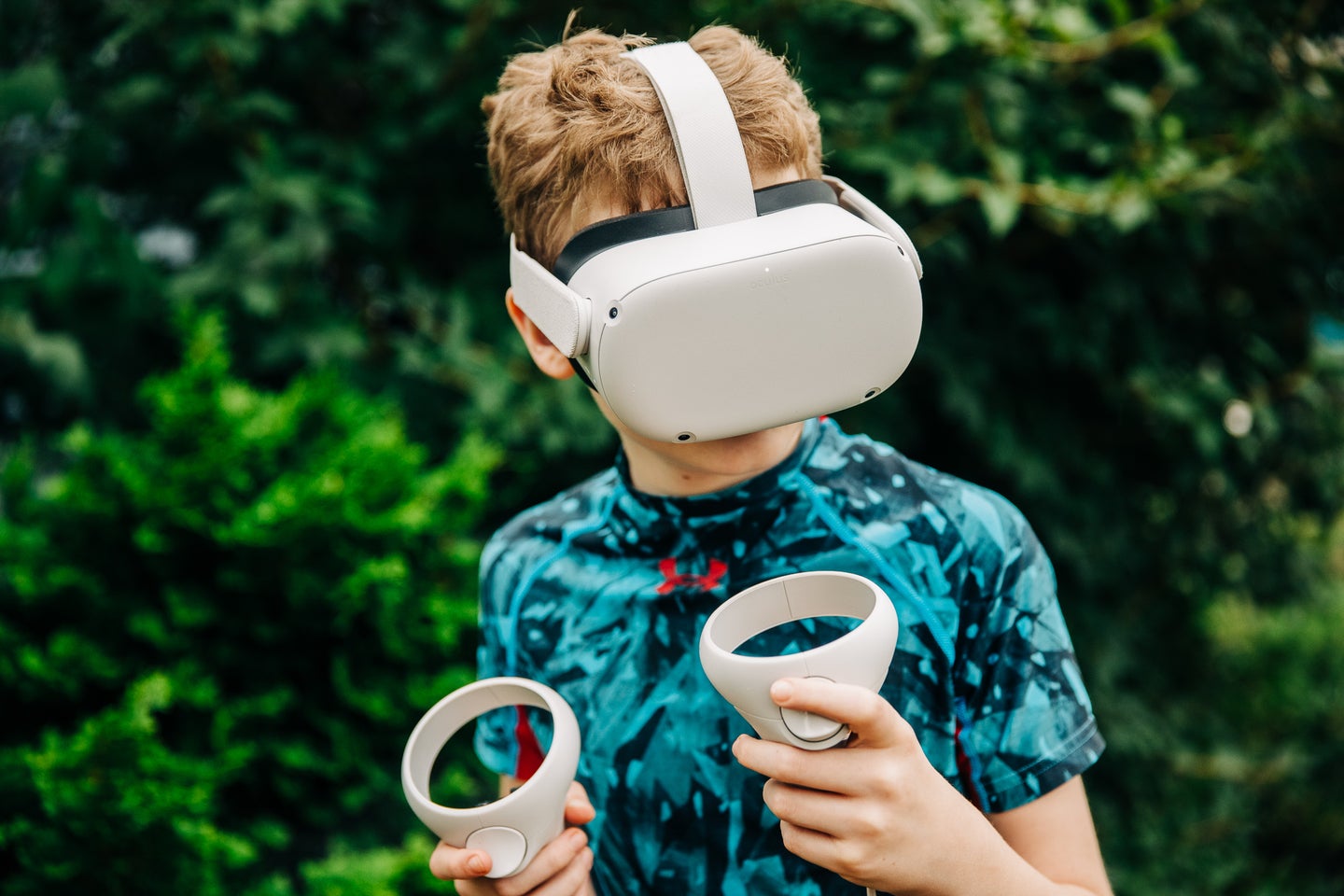 The new strap is comfortable to wear but not kind to haircuts. Stan Horaczek
SHARE

When Facebook released its Oculus Quest headset in 2019, it tried to address a conundrum that has confounded consumer-oriented VR from the start. It was a huge step up from flimsy headsets designed to hold your phone and even Facebook’s own mobile VR product, the now-discontinued Oculus Go. What’s more, the Quest didn’t require players to stay tethered to a powerful—and pricey—gaming PC just to experience more advanced VR games. The new Oculus Quest 2 Virtual Reality VR Headset is a significant improvement on its predecessor.

The Quest was a big deal as a virtual reality headset, but it had its drawbacks. At $299 it was expensive when you consider the relatively limited pool of content from which players had to choose. Its front-heavy design could make it uncomfortable during long sessions. And the displays were good, but not mind-blowing.

Now, however, Facebook has introduced its new Oculus Quest 2 Virtual Reality VR Headset and it improves upon its predecessor in almost every way. More importantly, however, it creates an all-in-one best VR system system that’s truly worth buying, even if you’re a relatively casual user. Here’s what you need to know if you’re wondering “is the Oculus Quest 2 worth it?”

From a technology standpoint, the Oculus Quest 2 Virtual Reality VR Headset offers a litany of hardware upgrades. It has 6 GB of RAM inside, which is a 50-percent jump over the previous model. The base Quest 2 has 64 GB of storage, but the upgraded model goes up to 256 GB, which would come in handy if you plan to store a lot of content directly on the device. It’s also lighter and more comfortable to wear, all while dropping the price down to $299.

I’ve been playing with the Oculus Quest 2 Virtual Reality VR Headset for more than a week and it has impressed me in a number of ways. With the virtual reality goggles, each eye gets its own 1,832 x 1920 display. At launch, the displays will only run at a 72 Hz refresh rate, but they’re capable of 90 Hz, which doesn’t sound like a big jump, but makes a critical difference when it comes to smooth motion. Right now, users can turn on the 90Hz feature in the menus and home screens as part of Facebook’s experimental mode, but the company says it will make it the default later this year.

The straps that hold the headset on your face are stretchy fabric, which adjusts with a pair of simple sliders. My son and I were switching back and forth during the review period and making the adjustment was quick and simple each time. When switching, we also had to change the lens settings, however, which works slightly differently than it has in the past.

The lenses inside can sit in three different positions depending on how close together or far apart you want them to be. That variable is called interpupillary distance (IPD) and the settings are 58mm, 63mm, and 68mm if you’re familiar with the terminology. The correct setting for you depends on the geography of your face—my giant boulder head required the widest setting, while my son found the middle most comfortable. Facebook says the vast majority of users should find one of the three comfortable to use.

Facebook really does believe that this will encompass just about everyone who wants to play in VR. In fact, the company is putting all of its faith in the Quest 2 as it is the only VR headset it will offer. It can do that because it also works as a wired headset if you buy the $79 Link cable. That lets players utilize the processing and graphics power inside of a powerful PC to provide the required oomph necessary for high-end titles like Half-Life: Alyx.

Even without tethering to a PC, however, the Oculus Quest 2 Virtual Reality VR Headset really does feel powerful. Playing through Beat Saber—a game in which you use laser swords to cut through flying blocks to the tune of popular songs—the game and controllers were responsive enough that I never felt cheated out of my performance. I lost because I sucked at the game, not because it lagged or lost sight of the joysticks.

The controllers themselves now offer a better resting area for your thumb so you don’t accidentally press buttons as you flail wildly. The AA batteries that power the controllers also now last up to four times longer than the previous Quest. The batteries that shipped in my controllers are still over 90 percent charged even after lots of heavy use. Disposable batteries are inefficient but much more convenient—plugging in the headset and two controllers every time you want to play typically results in frustration when you realize one of them didn’t charge correctly.

In some circumstances, you can ditch the controllers completely and let the headset track your hands with its outward-facing cameras. You navigate with pinches and gestures. In its current iteration, I found the hand tracking frustrating, but it gets better as you learn what the cameras like. My air-pinching was apparently not sufficient for the Oculus at the start. It’s also worth noting that players look totally ridiculous when using the hand-tracking—like they’re playing “got your nose” with an imaginary baby or tickling a virtual Bigfoot.

Awkward gestures aside, it’s still hard to imagine wearing the Oculus Quest 2 Virtual Reality VR Headset out in public on the regular. The straps are comfortable, but it’s still front-heavy. Facebook says an optional upgraded strap with a battery pack will help balance out the weight in addition to extending playtime, but that’s adding extra cash to an already pricy purchase. Some users have rigged up makeshift counterbalance weights for the headset as well, but Facebook recommends against that.

On the whole, however, the Quest 2 is the best VR headset for PC as long as you don’t mind a few compromises—not all of which have to do with the hardware. You now need to link your Facebook account with the Oculus before hopping in to play. From an experience standpoint, this didn’t change anything as far as I could tell. But, if you’re planning to use the device to browse the web, it’s harder to forget that Facebook knows what you’re up to on the Internet.

Who should buy the Oculus Quest 2 VR Headset?

If you’re looking to buy one of the best VR headsets, this is clearly the best option at the moment. It’s powerful enough to handle a fairly robust set of games, but simple enough that you don’t have to rearrange your life—or your living room—in order to make use of it. Like with any game console, however, you should think twice if that $299 represents your entire game budget. If you’re relegated to only free content, the games get lackluster and the content to watch gets old relatively quickly. If you can spring the extra cash for games like Beat Saber or Vader Immortal, however, you’re in for an arm-flailing good time.