It’s not simple to setup, but the tracking and image quality are excellent. 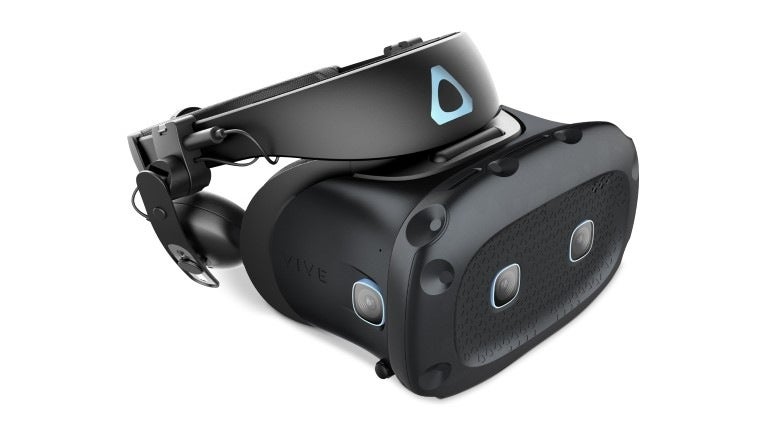 The phrase “VR headset” can have quite a few meanings in the consumer electronics world, and it can be hard to separate them. At the base level, you can slap your smartphone into a cheapo headset—some are literally made of cardboard—load up a VR-ready app, and get a basic virtual experience. When it comes to consumer-grade VR, the HTC Vive Cosmos Elite sits at the high-end of home-oriented gear along with the perpetually sold-out Valve Index. If you’ve only ever used a stand-alone, or even phone-based VR set, this is a totally different experience.

At $900 retail, the Vive Cosmos Elite isn’t the kind of thing you can simply take out of the box and start playing. It requires a powerful-enough PC to run the games—I used an Alienware Aurora RYZEN edition for this review. With the much cheaper Facebook Oculus Go, which is meant mostly for watching content or playing simple games, you just use a dinky remote.

Setting up the Vive Cosmos Elite involves placing two beacons in opposite corners of your room throwing infrared signals into your space. These help the headset locate where you are in the space with much greater accuracy than motion sensors inside the headset. Each beacon requires its own outlet—you can install them on your walls, rest them on a tripod, or simply just set them on conveniently located shelves. The headset requires a hub of cables that attach to the computer, and the two controllers that come with the device also need to be charged. Point is, setup is a process.

Once it’s all done, however, the Vive Elite Cosmos lives up to the technical promises it makes on paper. The display has a total resolution of 2880 x 1700, which means each eye gets its own 1440 x 1700 display, located in the top of the segment. The headset does an excellent job combatting the “screen door” effect that plagues lower-resolution models. The 90 Hz refresh rate makes for smooth motion, and the 110-degree field of view is satisfying and immersive. It’s an all-around very solid experience.

Still some of the hardware reads a little dated. The controllers charge via micro USB instead of making the jump up to USB-C. You need a display port on your PC to connect the device, given that it doesn’t support HDMI. The headset itself is large and slightly clunky, but that’s not out of the ordinary for just about every consumer headset on the market at the moment. The padding and balance are solid, so it’s comfortable over hours of play despite the size.

Once you get past the setup and the hardware, however, the experience is excellent. I played through a large chunk of the really fantastic Half-Life: Alyx as well as countless rounds of Beat Saber, which merges the concept of Guitar Hero with lightsabers.

With the beacons in place, the hand and head tracking barely hiccuped. The ratcheting headband kept the display snugly in-place, even during quick movements. And despite feelingl overly large, the controllers were highly responsive.

If you’ve never used a high-end setup like this, it’s an entirely different experience. The first time you use the pass-through functionality that shows you a mixture of real world and the digital environment, it feels magical. It also helps you understand where you are so you don’t go crashing through your TV during intense gameplay.

If you’re just hoping to passively watch content or “hang out” in VR worlds, this is likely overkill. But if yous want to play high-end virtual reality games and have a PC that can support the Vive Elite Cosmo, this is a great way to do it, even if it costs you considerably more than some of the competition like the Oculus Rift S.

In a time when we’re not leaving our homes much, the VR revolution is raring to happen. But the Vive Cosmos Elite isn’t going to be its juggernaut. Still, if you want to experience the best VR content you can get at the moment, the HTC system can handle it. Just make sure you don’t put your drink down in front of the beacons by accident. That little mistake cost me a high score in Beat Saber.