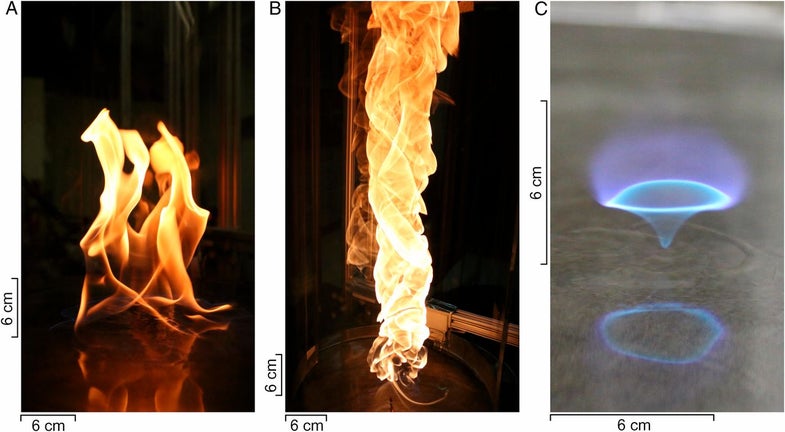 Normally, fire whirls are one natural phenomenon you’d want to stay well clear of. When these flaming maelstroms develop in the wild, they are catastrophically dangerous. But scientists are attempting to harness their power in the lab. In a new experiment, engineers at the University of Maryland in College Park ignited a tiny fire whirl and were able to transform it into a new kind of blaze. This “blue whirl” burns nearly soot-free, and may be able to produce energy with low amounts of pollution, or offer a new tool to clean up oil spills.

Fire whirls—also called fire devils and fire tornadoes—can form in urban or wildland fires and generate powerful winds that pick up and hurl burning debris. The authors describe these whirlwinds as “powerful, spinning disasters for people and surroundings.” In their new research, the team was attempting to study fire whirls that burn over water, with an eye to improving oil-spill cleanup, when they discovered the new phenomenon.

To create a flame, the team poured liquid fuel on the surface of water in a steel pan, then ignited it to make what’s called a pool fire. These flames can burn on any flat surface smeared with fuel, including oil spills, and can evolve into fire whirls.

Over the fire, a pair of quartz half-cylinders formed a sort of tube with slits to pull cold air up into the chamber and coax the flame into a whirl about 2 feet high.

“Then, unexpectedly, the fire whirl continue[d] to evolve to a different, unexpected fire structure: a small, intensely whirling blue flame,” the team wrote in Proceedings of the National Academy of Sciences.

Unlike the turbulent pool fire and fire whirl that preceded it, the blue whirl is very stable. It’s also small (up to 3 or so inches), and quiet. To keep it dancing, the team used a copper tube to pump more fuel in. Under the right conditions, they could keep it going as long as it had fuel, up to 8 minutes.

Somehow, the flame’s intense, oxygen-hungry swirl and the presence of a watery border instead of a solid surface seem to allow it to reach the newly discovered blue whirl state. But it’s not clear yet why scientists haven’t seen the blue whirl before, why it forms—or whether it can be ignited on a larger scale and used in energy production.