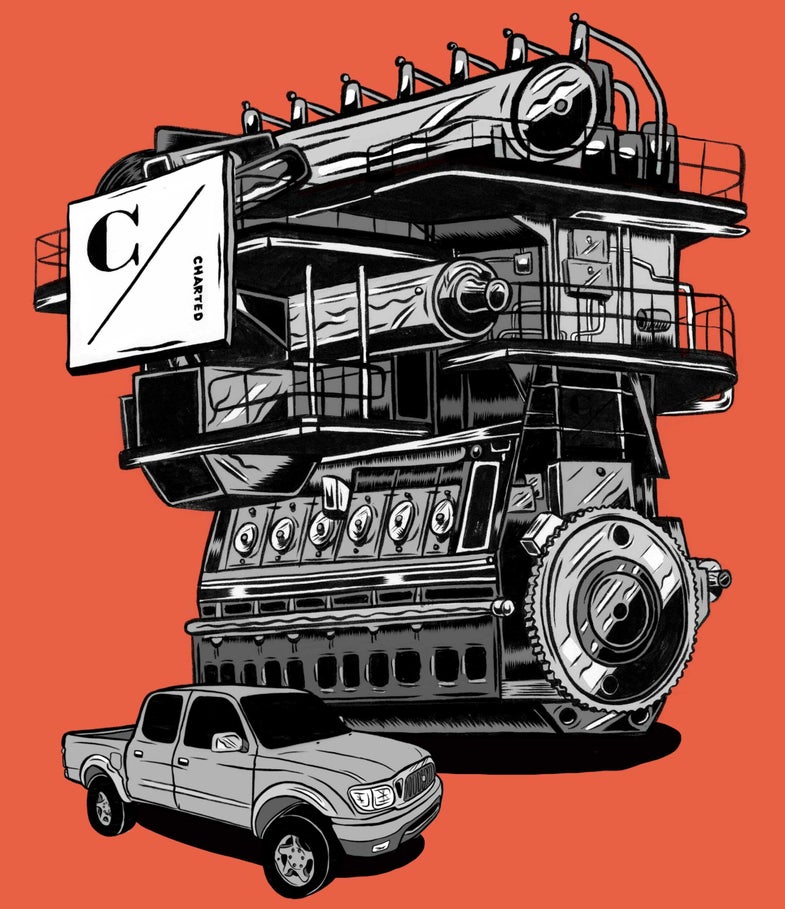 Shipping up to 15,550 20-foot-long containers across the world’s waves is hard work. So hard that Emma Maersk, a quarter-mile-long cargo ship, needs serious muscle: the Wärtsilä 14RT-flex96C—44 feet tall and 87 feet long—among the largest diesel engines on the planet.

Because they cost a lot to run and belch filthy emissions, shipping outfits plan to phase out all 24 of the engines now in use, or switch them to cleaner-burning, pricier fuels. By around 2020, new emissions regulations will restrict them on the water. For now, one beast generates enough horsepower to propel Emma and tons of consumer merch—one container holds 6,000 pairs of sneakers, 10,000 iPads, or 48,000 bananas—from Suffolk to Shenzhen at 28 miles per hour. That’s about 60 percent faster than competitors.

Although it’s a relatively efficient engine, the 14-cylinder RT-flex96C can still consume nearly 12 million gallons of diesel in a year. And since fuel can account for roughly 70 percent of a cargo ship’s operating budget, this one is a money burner.

Engineers must warm the engine’s tarlike heavy fuel oil—the dregs of the refining process—before use. Newer engines can use cleaner fuel, such as more-refined diesel or liquid natural gas, at lower temperatures.

Your car engine might last a few thousand running hours in its lifetime. The 14RT-flex96C can chug up to 175,000 hours. Thanks to their rugged construction, engines like this one can run continuously for as long as 25 years.

A consumer four-stroke engine might top out at 3,500 rpm, firing every other revolution. This runs a two-stroke operation, moving more slowly but firing every cycle. It produces more power while moving the pistons less frequently.

This article was originally published in the May/June 2017 issue of Popular Science, under the title “Diesel sea beast.”