Ben Franklin invented a mesmerizing instrument with a deadly reputation 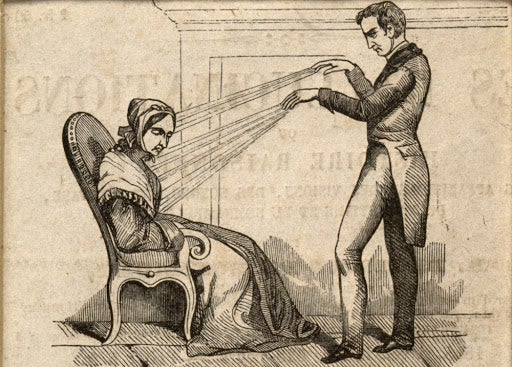 Mesmerism was about more than just hypnosis. Wikimedia Commons
SHARE

This week’s episode is extra special: It’s the second half of our latest live show, which happened on October 31 at Caveat in NYC. As mentioned at the top of this week’s episode, you may hear hosts or audience members shouting “drink!” This is because we were playing a drinking game, which you’re welcome to recreate on your own time (assuming you’re of legal age and not driving while you listen). Check the bottom of this post for rules. And if you want to see us live in your city, help us out by completing this quick listener survey!

FACT: Ben Franklin invented an instrument that some thought could drive people insane

Anyone who’s been watching HBO’s new “Watchmen” series has already heard of Mesmerism. By total coincidence, I happened to bring up the creepy character Franz Mesmer in our latest live show. Mesmer—who’s where the word “mesmerizing” comes from—was a German doctor during the 18th and early 19th century. He invented the concept of “animal magnetism,” otherwise known as “Mesmerism,” which essentially boiled down to the belief that something—some sort of life force—flowed through all living things. By tuning into that flow and altering it, Mesmer believed, one could control the health (and mind) of any human subject. Most of his therapies and experiments centered around spiritualized versions of what we now might consider hypnotherapy.

Mesmer’s experiments were pretty quickly side-eyed by mainstream medical practitioners, and while Mesmerism had a decent following through the mid-1800s, it didn’t have a great reputation. So when Mesmer decided the glass harmonica (also often called the armonica) produced the perfect music to accompany his bizarre hypnotic sessions, the popular instrument actually suffered from the association. This may have contributed to the ethereal armonica’s downfall, helping to fuel rumors that it so affected human nerves it could drive someone playing or even listening to it to insanity—or even an early grave.

Listen to this week’s episode to hear more about Ben Franklin’s armonica. Franklin elevated the ancient musical water glasses made famous by Sandra Bullock into a delicate instrument beloved by composers like Mozart, who composed the piece in the video below (played by Dennis James, who pretty much single-handedly brought the instrument back to life in the 1980s).

Was the armonica’s disappearance due to its mesmerizing powers? Its high levels of lead? Its fragility? The fickle preferences of German art critics? All this and more in this week’s episode of the show, which you’ll find at the top of the post. Just try not to let us hypnotize you on your commute.

(If you’re curious to see the Fantasmagoria illustration mentioned in the episode, you can find it here.)

FACT: People ate people due to an etymological error

Medical cannibalism has already featured prevalently on the show, but in this week’s episode I take a deeper dive into the specifics of mummy consumption. Namely, the fact that people ate mummies—the ancient, mummified, stolen remains of other human people—because someone somewhere misunderstood what a word meant. Find out more by listening to the live show!

I was just a few days out from competing in the New York Marathon when we recorded this live show, so the spookiest stories I could come up with were all about one thing: running. But trust me—back in the olden days of modern marathoning, races got plenty scary.

I’ll set the stage. In 1896, the Greeks decided to bring back and modernize the Olympic games, and they decided to include marathons—running for 26.2 miles. Now it’s 1904, and even though the sport of running as we know it is still in its infancy, a motley crew of male athletes both amateur and elite have gathered to undertake the endurance race in St. Louis, Missouri. It’s August, it’s hot, and there’s a single self-service water station (in the form of a well that may or may not have given runners the runs, depending on who you ask) right in the middle of the course.

Listen in to hear the entire saga—from champions intentionally doping with rat poison, to men literally tearing off their pants, to a would-be cheater rolling to the finish line in a taxi.

Luckily our understanding of the human body has come a long way, and marathons today are approached a lot more scientifically. Check out the tricks I learned while prepping for my first marathon—no rat poison required.

If you like The Weirdest Thing I Learned This Week, please subscribe, rate, and review us on Apple Podcasts (yes, even if you don’t listen to us on Apple—it really does help other weirdos find the show, because of algorithms and stuff). You can also join in the weirdness in our Facebook group and bedeck yourself in weirdo merchandise from our Threadless shop. And if you want to see us live in your city, help us out by completing this quick listener survey!