What archaeologists got wrong about female statues, goddesses, and fertility 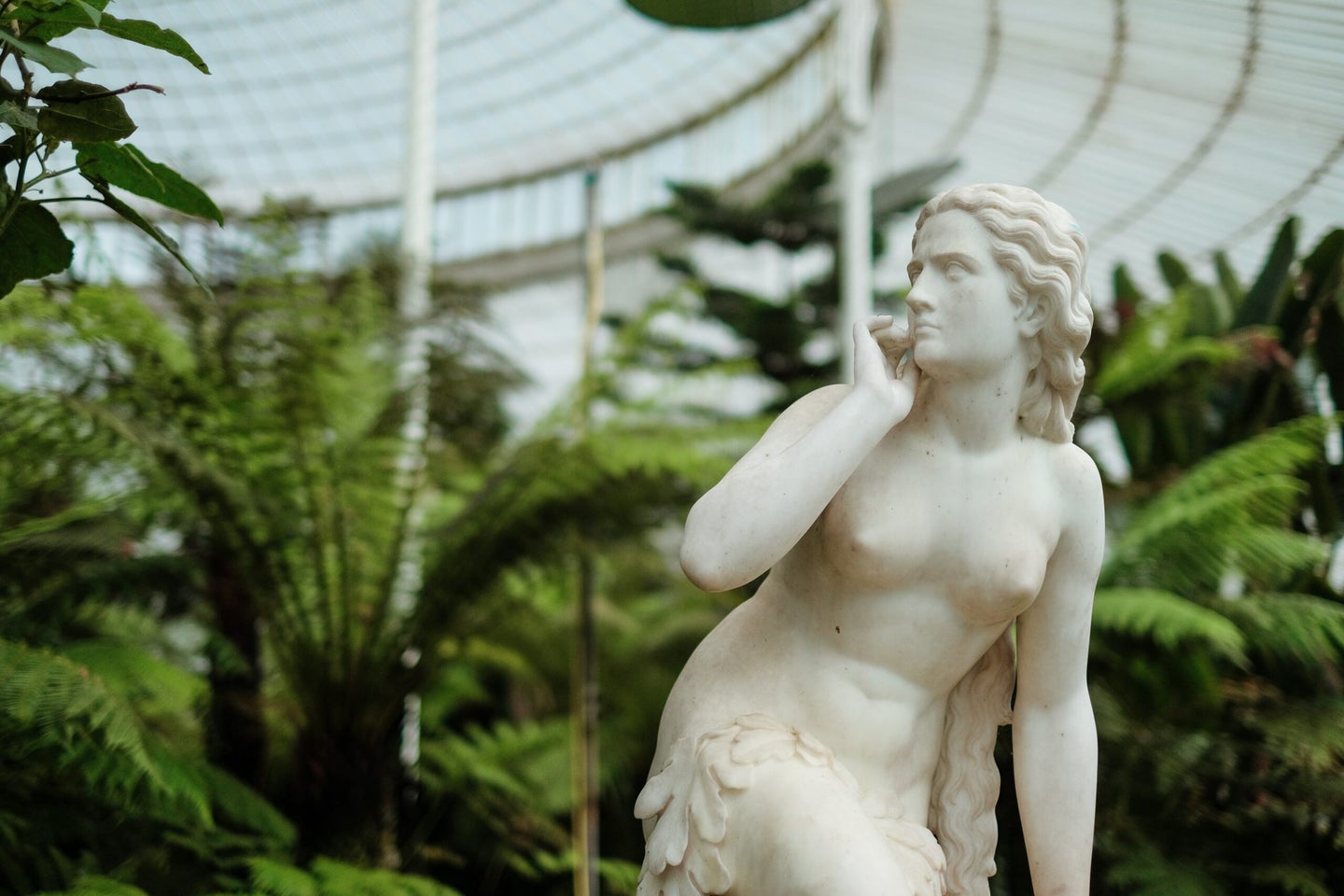 How modern society views art can be totally different from the way it was intended. Adam Wilson via Unsplash
SHARE

It all started back in the early 1960s, when the British archaeologist James Mellaart was the first European to get permission to excavate Çatalhöyük, an ancient city in modern-day Anatolia, Turkey. At the time, the place was known to locals as two picturesque mounds whose grassy tops still showed the faint, angular ridges of an ancient city’s walls. When Mellaart and his team visited, they talked to local farmers whose plows had unearthed pottery and other artifacts that suggested Neolithic craftsmanship.

Excited and not sure what to expect, Mellaart cut deeply into the eastern mound in 1961, roughly 200 meters south of where archaeologist Ruth Tringham later uncovered the skeleton of a woman whom she nicknamed “Dido.” Among many other artifacts, he found a few female figurines. He was especially impressed by one of them, who was seated in a chair with her hands on the heads of two leopards. He decided she must be on a throne, and that an abstract bulge between her ankles was a recently birthed child. Further excavation revealed the figurine had come from an elaborately decorated room that he dubbed a temple. Based on this scant evidence, Mellaart announced that the people of Çatalhöyük were a matriarchy that worshipped a fertility goddess.

This misinterpretation wasn’t just the product of one man’s overactive imagination. Mellaart probably took inspiration from the late Victorian anthropologist James George Frazer, author of The Golden Bough, who hinted that pre-Christian societies may have worshipped a mother goddess. Classical scholar and poet Robert Graves built on Frazer’s work in the 1940s with a wildly popular book called The White Goddess, which argued that European and Middle Eastern mythologies all came from a primal cult devoted to a goddess who governed birth, love, and death. Graves’ work electrified anthropologists and the general public. As a result, people of Mellaart’s generation were primed to see ancient civilizations through the lens of goddess worship. Few scholars questioned his interpretation. Meanwhile, celebrated urban historians Lewis Mumford and Jane Jacobs were quick to embrace the idea that Mellaart had finally discovered the remains of a civilization that thrived in a time before humans had rejected female power.

Mellaart went far beyond Frazer’s and Graves’ claims about goddess worship by suggesting Çatalhöyük was an ancient matriarchy where women ruled over men. And that claim had to do with Mellaart’s ideas about sex. There was something about the imposing nudes he’d discovered that struck him as odd: none of them seemed to have genitals. Instead, their bodies were thick and strong, flanked by fierce animals. They were the opposite of the soft, eroticized centerfold models in Playboy, an iconic “gentleman’s magazine” that Mellaart certainly would have encountered in the 1950s and ’60s. Mellaart decided that a male-dominated society would never produce female figures like the ones he’d found because they didn’t cater to “male impulse and desire.” Only a matriarchy could produce nonsexual figurines of naked women, he concluded.

Mellaart’s largely unfounded hypothesis went viral when his findings were published in the US magazine Archaeology, complete with several pages of lavish photographs. The Daily Telegraph and Illustrated London News also covered his finds enthusiastically. The previously unknown site in Anatolia became a popular sensation, helped by dramatic pictures of the “lost city” whose residents were so strange that women had ruled over men! Since then, Mellaart’s unfounded claim about goddess worship has persisted for decades. It’s often the only thing that people know about Çatalhöyük. The idea of a lost goddess-worshipping civilization in central Turkey has even found its way into new-age beliefs and inspirational videos on YouTube.

Today in the archaeology community, Mellaart’s ideas are received with extreme skepticism. Though he deserves plenty of credit for identifying Çatalhöyük as a rich archaeological resource, his interpretations of its culture are contradicted by loads of evidence that researchers have discovered since the 1980s.

If Çatalhöyük wasn’t a matriarchy of goddess-worshippers, then how should we interpret those female figures? Lynn Meskell, a Stanford archaeologist who has analyzed Çatalhöyük figurines across the site, believes that Mellaart and his contemporaries misinterpreted them partly because they didn’t have the context provided by looking at the site in its entirety. Now that we have data from 25 years of continuous excavation, it turns out that these female figurines tell a more complicated story. First of all, women and human figures generally represent a small number of figurines compared to animals and body parts. At Dido’s house, for example, archaeologist Carolyn Nakamura counted 141 figurines, and of these 54 were animal figurines while only five were fully human ones. An additional 23 represented human body parts, like hands. Other houses in the city show a similar ratio, with animals a far more popular subject than humans of all types. If any type of symbol held sway over this community, it was more likely to be a leopard than a woman.

The other thing that Mellaart got wrong about the importance of female figurines was how they were used in everyday life. Molded quickly from local clay, baked dry in the sun or lightly fired, they were clearly not put on a shelf to be admired or worshipped. Worn down and chipped from frequent handling, these figurines look like they might have been carried around in pockets or bags. Archaeologists usually find them in trash piles or jammed between the walls of two buildings. Occasionally they’re buried in the floor, much like those memento bones and shells in Dido’s house. It’s hard to imagine people treating objects of worship so casually, tossing them out rather than placing them reverentially in wall displays the way they did their ancestors’ skulls.

Meskell muses that these figurines “may have operated not in some separate sphere of ‘religion’ . . . but, rather, in the practice and negotiation of everyday life.” Dido’s people may not have had a notion of religion as we know it, and thus would not have worshipped a “fertility goddess.” Instead, Dido might have engaged in small, everyday spiritual acts similar to those we see in animism, where spirits reside in all things rather than a handful of powerful deities.

The figurines themselves may not have been objects of reverence, but the act of creating it could have been a magic ritual. Seeking guidance or good fortune, Dido would quickly mold one from the clay next to the field where she harvested wheat. Once it was dry, she could have used it in a ritual that drained its power away. Afterward, she’d throw the clay figure off her roof along with waste from yesterday’s meal. If people at Çatalhöyük used the female figures like this, it’s clear why people threw them away so often. Making them was more important than keeping them.

[Related: Egypt is reclaiming its mummies and its past]

Another possibility is that these figures represented revered village elders, women who reached the age Dido had by the time she died. Meskell points out that no two figures are exactly alike, and most have sagging breasts and bellies that suggest age rather than fertility. Perhaps when Dido and her neighbors made these figures, they were calling on the power of specific female ancestors rather than some abstract magical force. Some activities or events in Dido’s culture may have required the aid of a powerful woman. Still, this practice doesn’t suggest a matriarchy. We know the plastered human skulls at Çatalhöyük, revered and passed from hand to hand, came from men and women in roughly equal numbers. It doesn’t appear that one gender was privileged over the other, at least if we consider the way skulls were preserved.

UC Berkeley archaeologist Rosemary Joyce, who revolutionized the field with her work on gender in early societies, argues that we can’t be sure female figurines would have been regarded as representing women as a group. She writes:

“Even a figurine with abundant detail that allows us today to say ‘this is an image of a woman’ might have been identified originally as an image of a specific person, living or dead, or as the personification of an abstract concept—like the representation of Liberty as a woman—or even as a representation of a category of people, such as elders or youths, unified by some feature we overlook today when we divide images by the sexual features that are so important in modern identity.”

Joyce points out that it’s easy to project our modern understanding of gender onto ancient peoples—which means we are always looking for ways that one gender might have dominated the other. That’s exactly what Mellaart did. Instead, we have to be open to the possibility that the people of Çatalhöyük divided their social world up using other categories, like young and old, farmer and toolmaker, wild and domestic, or human and nonhuman animal.