Egypt is reclaiming its mummies and its past 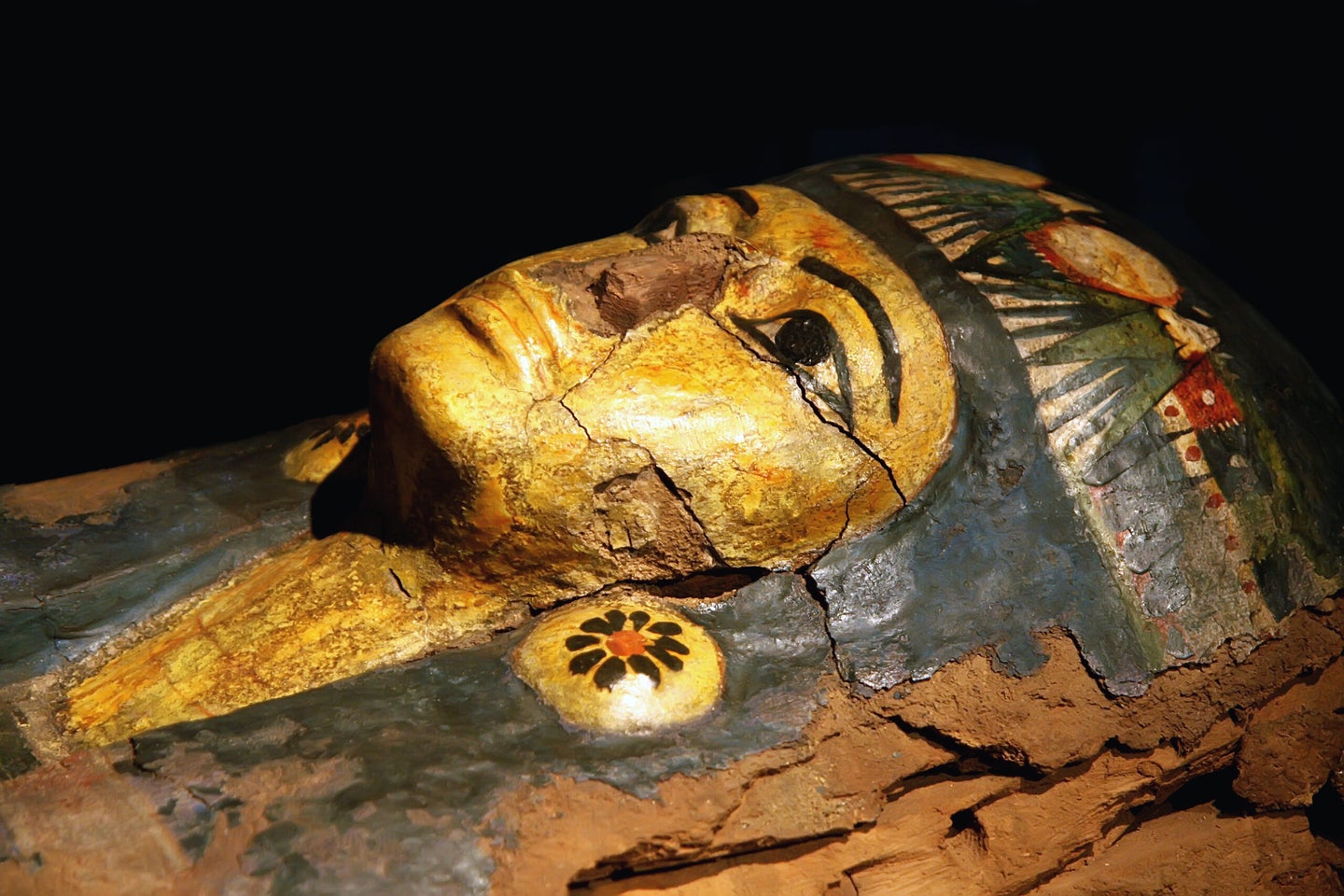 Since the beginning of archaeological digs in Egypt, Egyptians have been involved, even if they've sometimes pushed out of the spotlight. Deposit Photos
SHARE

Last month, Egyptian excavators revealed a long-undetected trove of treasures in the Al-Asasif Cemetery in Luxor. The discovery, which included 30 beautifully preserved coffins and mummies, dating more than 3,000 years old, is one of the most notable archaeological finds in the past century. The bodies and sarcophagi have remained in pristine shape, thanks to Egypt’s nearly humidity-free climate and pure luck that robbers hadn’t happened upon the ancient burial first.

It’s been close to 100 years since a cache of this size has been dug up in the country, says Kara Cooney, an Egyptologist at UCLA. The mummies are from the 21st and 22nd dynasty, she adds, and the coffins likely belonged to the high priesthood of Amun, not royalty. Two of the bodies were identified as children.

“There was no king of power in Luxor at the time, so the people filled that power vacuum with a kind of theocracy or temple rule,” Cooney explains. “The priests were the ones with power and the positions and the ability to buy coffins.”

But there’s another groundbreaking nugget in the news. For the first time in history, the crew behind the find is all Egyptian.

“The last one in 1891 was [led by] foreigners. In 1881 [also] foreigners. But … 2019 is an Egyptian discovery,” Mostafa Waziri, the secretary general of the Supreme Council of Antiquities in Egypt, told CNN. “This is an indescribable feeling, I swear to God.”

For archaeologist Serena Love, who spent years working on sites in the Nile Valley, this is one of the most exciting and vital parts of the discovery.

The exotic roots of Egyptology

Modern Egyptology is a fairly new business. On paper it started with Napoleon Bonaparte, the infamous leader of France who rose to prominence in the late 18th century. During a campaign to invade Egypt in 1799, one of his foot soldiers stumbled upon the Rosetta Stone, leading some to think of Napoleon as the “grandfather of Egyptology,” says Love. This revelation set off a chain of European excavations around Africa, and some of the impacts still linger today.

As the first significant digs got underway in the mid-19th century, more Europeans arrived in Egypt to lead the archaeological work. They would outsource the physical labor to local teams, but take all the credit when it came to academic publications and media attention.

“The power imbalance was inherent in that division of labor,” says Meira Gold, a historian of science specializing in Victorian Egyptology. Despite working on almost every major excavation that took place in their country, “Egyptians were rendered invisible,” she adds. Sometimes they’d even tip Western archeologists off to prolific sites.

In the end, colonialists cast a long shadow over the ownership and interpretation of priceless artifacts. Europeans saw themselves as superior to current-day Egyptians, Gold says, and tried to “claim” the ancient culture as a part of the history of Western civilization. They sold the greatest treasures from the Nile Valley to museums in New York, London, Paris, and Berlin, where they continue to be housed to today.

After Great Britain occupied Egypt in 1882, archaeology turned into more of a “preservation practice” for white scientists who wanted to save Egyptian antiques. This practice continued until 1922—the same year the country won its independence—when a team led by English archaeologist Howard Carter discovered King Tut’s Tomb.

Egyptians take control of their narrative

After a military coup in the 1950s, the Egyptian government moved all of the country’s major archaeological institutions, including the four museums, under its supervision, says Sameh Iskander, an Egyptian-American archaeologist at New York University.

“Now, the picture is completely different,” he adds. Egyptians run their own digs and make their own discoveries—but it’s been a long process to get there.

Diana Patch, currently the Lila Acheson Wallace Curator of Egyptian Art at the Metropolitan Museum of Art in New York City, has worked on various sites around Egypt since 1979. In her time there, she and her colleagues noticed that many young Egyptians who were interested in field archaeology couldn’t get an education in it. Locals would be on dig sites as inspectors, but there was still a disconnect.

Through the American Research Center in Egypt and with a cultural grant from USAID, Patch began a solution in the mid-1990s: Egyptology field school.

Field school is a cornerstone of American archeology programs. Students spend a summer digging in situ, learning how to handle important historical quarry. Patch recruited Egyptian and American supervisors who’d been through field school in the US to lead groups of recruits in Egypt. Now, most of the Egyptian inspectors working on sites have gone through similar training.

But how does education help representation—and Egyptology—in the long run? “I feel that the Egyptians that I work with, the whole atmosphere has changed,” Iskander, who leads a field site at the Temple of Ramesses II in Abydos, says. “A lot of them have degrees now; a lot of them are pursuing graduate degrees.” And with more Egyptian archaeologists joining the ranks, there’s a larger well of expertise for scientists overseas to tap.

It also means that mummies and other priceless finds get to stay in the climate they were built and preserved for. After the King Tut artifacts come back from their current world tour, they will be permanently housed in Cairo at the new Grand Egyptian Museum, which is set to open at the end of 2020.

The treasures from the Al-Asasif dig are expected to remain in Cairo, too, overlooking the wondrous Pyramids of Giza.

A common language for archaeology

It’s still a leap to say that Egyptians are the dominant force in the study of their origins. Iskander gave a talk a few weeks ago at the International Congress of Egyptologists in Cairo, and out of the 350 or so people speaking, only around 50 were Egyptian.

Part of the reason for this may be that English is still the leading language in Egyptology, despite the fact that Modern Standard Arabic is the official language of the region. In the same way that museums continue holding on to Egyptian relics, Gold says language is another colonial battle left to fight.

“There’s still this lingering power imbalance,” Gold says of the relationship between Egyptian and Western archaeologists. A lot of Egyptology programs, she explains, require knowledge in a smattering of languages, including English, French, German, and some elements of ancient Egyptian languages.

Modern Egyptian languages? Not so much, she says.

“As a result, very few Egyptological publications are written in Arabic. I think that speaks volumes as to how Egyptian archaeologists are still excluded.”

On his field sites, Iskander says that American students knew very little Arabic and have to communicate exclusively in English. Most Egyptologists have been forced to do the same. That’s not necessarily a problem, he says: If more Egyptian programs taught English, archaeologists from all over, including Egypt, would have better access to international journals that aren’t printed in the native tongue.

In Iskander’s view, the best way to fight back Victorian notions of Egyptology is by bringing more Egyptians to the table through education. Last year he started up a new field school for Egyptian archeologists—something he hopes international institutions take note of as the numbers of home-grown experts slowly rise in the field.

“Every foreign mission should consider having at least one field school session,” he says, “to give back to Egypt what Egypt has been giving all of us over the years.”