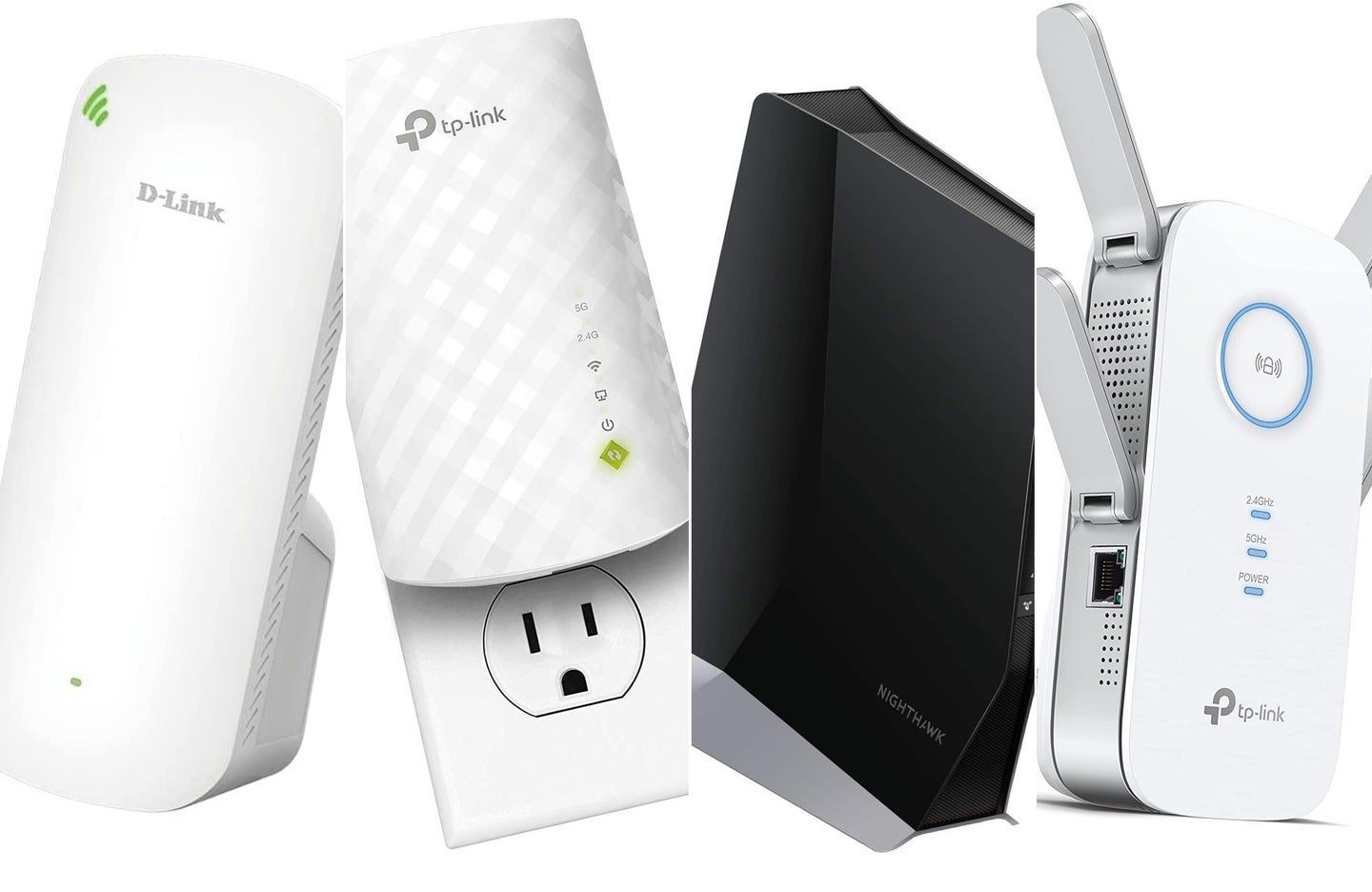 Leave no room unconnected with the best Wi-Fi extenders.

You’ve just set up your new, top-of-the-line router to take full advantage of your high-bandwidth home internet connection, but are horrified to discover that the signal—despite getting blazing-fast speeds in most of your home—just doesn’t quite reach your office. Between the limitations of your router’s range or physical interference from solid walls and other obstacles, it may be difficult to cover your home with a single, centralized Wi-Fi router.

Don’t worry! Rather than start from scratch, you may be able to buy an extra peripheral to strengthen your router’s signal and reach those awkward, out-of-the-way corners and make sure you’ve got complete wireless coverage throughout your home. Tapping into your existing network and then rebroadcasting the signal from a new location, the best Wi-Fi extenders should be capable of covering small dead zones in the far corners of your space.

How we picked the best Wi-Fi extenders

The best Wi-Fi extenders are understandably made by the same companies manufacturing the best routers that they enhance, so the expertise and familiarity with networking gear that I’ve gained from covering the space for Popular Science carry over here. I made these selections based on testing, reading professional reviews, and consumer impressions to ensure that these picks have the current top features on paper and are well-liked in practice.

Things to consider when buying a Wi-Fi extender

Before buying a Wi-Fi extender, you should first make sure that you need one at all. Try adjusting the position of your router to expand its connectivity. Ideally, you want to place your router as close to the center of your home as possible, in a position that is both high and far from any walls that might block your signal. (We see you trying to hide your router in your TV stand. Bring it out!) You also want to keep it away from other interfering electronics that may impede signal strength and range. If you’ve still got dead spots no matter where you place it, then it may be time for an extender.

Also, be sure to temper your expectations about what the extender can do. A router’s listed coverage range, given in square feet, is the manufacturer’s estimate of the area that the extender could potentially add to your network. Keep in mind that these are estimates, and may change depending on your home’s layout and your network’s wireless strength.

Wi-Fi extenders can’t magically extend the full force of your existing network forever. Any signal going through the extender has to make an additional step between your connected device and the modem: That process will reduce the bandwidth of your wireless signal by about half. That means you don’t want to rely on an extender for areas where you intend to do a lot of high-bandwidth activities like 4K video streaming or playing online games. Position your router to prioritize the room where you use your Wi-Fi the most, like your living room and home office, and use the extenders to bring some Wi-Fi to less important areas.

If you’ve got more substantive network coverage gaps to fill, you want to consider skipping a Wi-Fi extender and replacing your router with a mesh Wi-Fi system. These multi-router networks allow you to place multiple Wi-Fi access points around your home to generate signals from multiple places, rather than simply expanding or “boosting” the signal of a single, centralized router.

A mesh network distributes the network more evenly and widely, with less loss than using an extender. It also allows you to keep your entire house on a signal network with one name and password, while third-party extenders usually create a new, secondary network. Some modern Wi-Fi extenders will work within the same Wi-Fi network as your router, so long as both the router and extender come from the same manufacturer.

That said, a mesh system is a more expensive upgrade. It may be overkill if you simply need to get a better signal in one more room.

Many Wi-Fi extenders plug directly into an outlet, which can be conveniently discreet. Freestanding models that look more like conventional routers tend to be stronger, given their reduced spatial constraints. Freestanding models are also more likely to offer Ethernet ports to enable stronger connections for gaming laptops or streaming devices. Both have their merits, but it’s wise to understand the pros and cons of each form factor.

Depending on when you last bought a router, you may be wondering what Wi-Fi 6 is and whether you need to care about it. In short, Wi-Fi 6 is the newest wireless internet standard, which offers better connectivity when you have many devices on your network, among other things.

The changes from one generation to the next are fairly incremental and always backward-compatible with previous hardware, so you can never go wrong with getting the latest. That said, the best rule of thumb is to simply make sure your extender can cover the highest standard supported by your router. If you need to push a Wi-Fi 5 (802.11ac) signal, then there’s no need to spend more on a Wi-Fi 6 (802.11ax) extender.

Hopefully, you now have a sense of whether you should be looking for a Wi-Fi extender. If you’re still looking to fill a gap in your network, you’ve come to the right place. We’ve picked out the best Wi-Fi extenders you can buy right now, with options for various price points and user needs.

Buy it used or refurbished: Amazon

Why it made the cut: The Netgear Nighthawk AX8 offers an incredible range boost, extra ports, and more.

Unlike most outlet-mounted Wi-Fi extenders the Netgear EAX80 is a large, freestanding monolith that looks a lot like a regular router or modem. It’s pricey and can’t be wall-mounted, so you’ll need to find some table or shelf space for this imposing slab, but it’s the best-performing Wi-Fi 6 range extender out there. It adds up to 2,500 square feet of coverage and features four Ethernet ports, giving your home network a solid and fast new foothold. It also offers a generous suite of security customizations through an app or browser, including access control for individual devices. It can even serve as an access point in a Netgear-powered mesh network, giving you the option to upgrade if a simple extender doesn’t give you enough coverage.

Buy it used or refurbished: Amazon

Why it made the cut: The TP-Link AC2600 snaps into your wall outlet and pushes your signal far.

If you prefer a less obtrusive outlet-style extender, but need the full power of Wi-Fi 6, then TP-Link’s AC2600 extender is an easy choice, promising up to 2.6 GB/s combined over its dual 2.4 and 5GHz bands. It’s easy to set up with an app or browser controls. It can even serve as an access point in a mesh network with compatible TP-Link OneMesh routers. Its performance is second only to larger, freestanding models like our top choice, making it a kind among outlet extenders. There’s only one minor drawback: It’s quite large (3.4 x 6.4 x 1.6 in), so you may find it hard to plug other devices into adjacent outlets.

Why it made the cut: The Orbi Satellite Extender offers best-in-class performance and a rugged exterior so it can bring your signal outside.

Netgear’s Orbi line is one of the most popular home mesh network systems and the Outdoor Satellite RBS50Y is an excellent way to extend your Orbi network into the backyard. With IP66 weatherproofing, it’s designed to sufficiently withstand dirt, rain, snow, sprinklers, and all the elements in your yard. It can transfer an impressive 3 GB/s of data over three bands, with a second 5GHz band reserved for communicating with the mesh network. Although it was previously only compatible with other Orbi routers, subsequent firmware updates have made it possible to pair it with non-Orbi routers as an extender. While it’s an expensive option, especially if you don’t plan to use it as part of a mesh, the RBS50Y is a sturdy extender and a great way to safely bring the internet outside.

Why it made the cut: The D-Link DAP-X180 makes it cheap and easy to extend a Wi-Fi 6 signal.

D-Link’s DAP-X1870 is one of the simplest, most affordable ways to extend the power of your Wi-Fi 6 network. It has a clean design with internal antennas, easily disappearing into your wall to do its job. Reviews praised its performance, and the only major criticism we found was some users pointing out that it did not seem to work with the latest WPA3 security format, which is supposed to be a part of the Wi-Fi 6 specification. If Wi-Fi 6’s enhanced security was a crucial factor in your choice to update, the cost saved on this isn’t worth it; however, it should be as secure as previous-generation routers and could improve with firmware updates.

Why it made the cut: The TP-Link RE220 doesn’t have a ton of bells and whistles, but offers a strong signal extension for a low price.

The TP-Link RE220 is like a cheap slice of pizza—it isn’t high art but gives you exactly what you need for a low and accessible price. It only operates at Wi-Fi 5, its 5GHz performance isn’t quite as stable and fast compared to the 5GHz networks on more expensive range extenders, and the ethernet port doesn’t support Gigabit Ethernet. All that said, it adds plenty of distance to your 2.4GHz network, with enough bandwidth for basic internet use and streaming. It’s also compact and discreet, easy to stash away at any wall outlet or power strip. For less than $50, that’s hard to beat.

Q: Does using a Wi-Fi extender slow down your internet?

Yes, unfortunately. No matter what model you use, there will always be a speed drop when using a Wi-Fi extender, as it takes time for the signal to go through additional processing/boosting in the extender to be rebroadcast in either direction.

Q: What is the difference between a “Wi-Fi extender” and a “Wi-Fi booster”?

The terms “Wi-Fi extender” and “Wi-Fi booster” refer to the same piece of equipment. Manufacturers use the two interchangeably for networking peripherals that connect with and rebroadcast your Wi-Fi network to expand its range.

Q: How many Wi-Fi extenders is too many?

While there’s nothing to stop you from using multiple extenders to expand your network in multiple directions, you should avoid daisy-chaining multiple extenders to expand your network beyond the reach of an already-extended router. In theory, each extender cuts your network’s bandwidth by about half, so a double-extended signal only has a quarter of the bandwidth of your base signal. If you need more range beyond what a Wi-Fi extender can offer, you should upgrade your router.

The best Wi-Fi extenders offer a great solution to covering gaps in your home network when you don’t want to completely start over with a new router or mesh network. As Wi-Fi 6 supplants 5 as the new standard for more routers, extenders will naturally benefit as well. Leave no corner of your home unconnected with a great range extender.