Bone broth: a miraculous health tonic, or just a crock of soup?

Not all healthy food has to be a “superfood.” 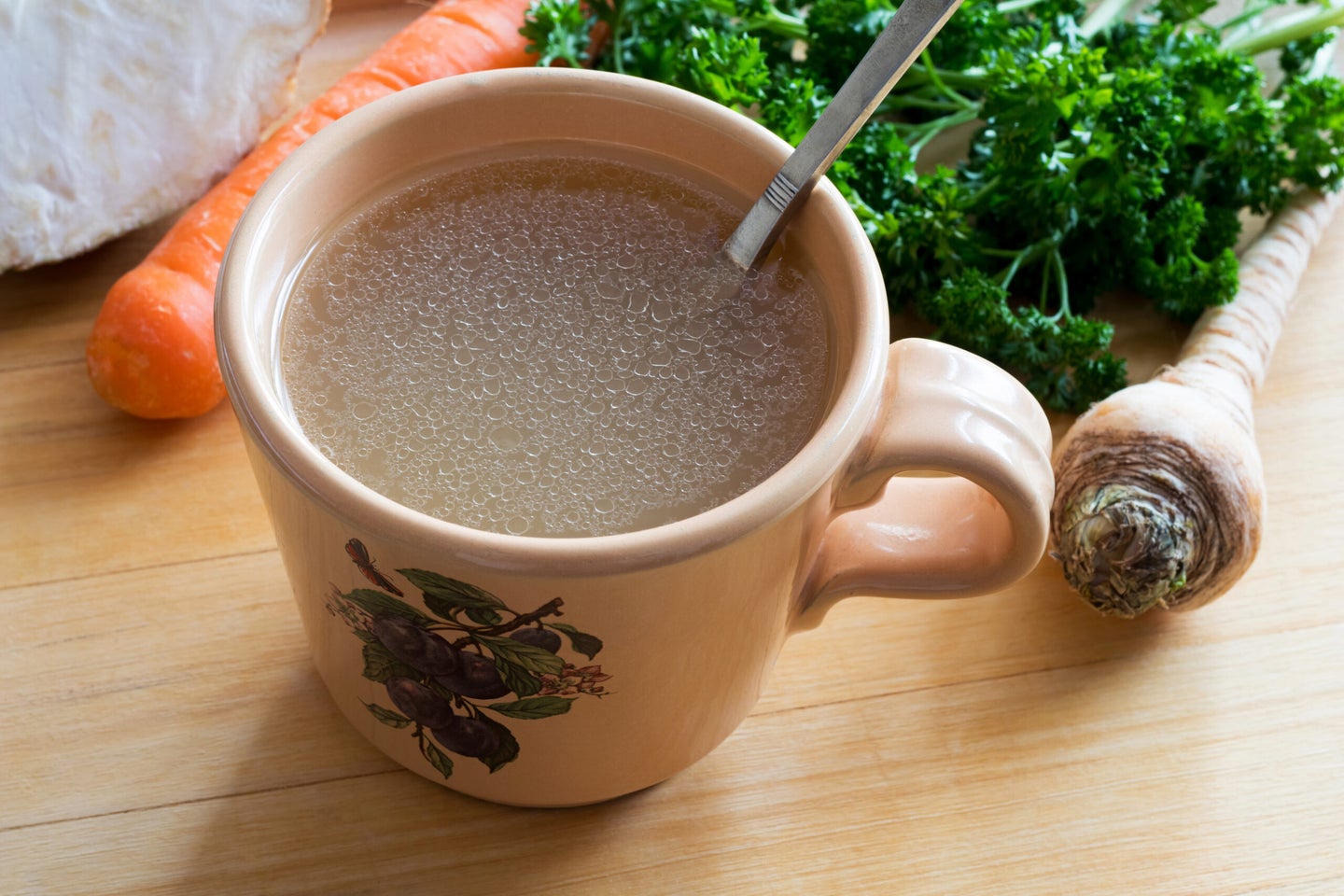 These days, it seems like everyone’s got an opinion on bone broth. The trendy, savory liquid goes for top dollar at urban eateries, but it doesn’t seem all that different from the stuff sitting in cans and boxes at your local supermarket.

To some, bone broth is the answer to all bodily ills, from repairing a leaky gut to fortifying your joints to making your skin appear more supple. Since it broke into the wellness scene a few years ago as the perfect wintry health drink, you can now find it in all kinds of forms, from concentrate to powder to protein bars. Touted ingredients include collagen, glutamine, calcium, and phosphorus—all of which are supposed to do wonders for the mind and physique.

In reality, the concoction won’t be your one-stop shop for nutrients. Different recipes might lead to fluxes in both desired and undesired ingredients, like sodium. Overall, though, the mixture is timeless, as boiling bones to make broth has been part of healthy diets for centuries.

“I don’t like to say there’s no benefit to a bone broth or any kind of broth or stock,” says Christine Zoumas, a clinical instructor of family medicine and public health at UC Santa Barbara. “It’s just not what it’s marketed as right now.”

But before we dive into the good, bad, and delicious of bone broth, it’s important to know exactly what we’re talking about. The dish is made by simmering vegetables, roasted bones, and sometimes meat over a course of as long as 24 hours. The mixture is then strained and seasoned, says dietician and best-selling cookbook author Toby Amidor. This is pretty similar to soup stock, which is made by cooking vegetables and animal bones together for around six hours. You’ll get minerals and protein from both of these recipes, Amidor says, but it might not be as wholesome as you expect. “For a lot of the various claims made on it, there isn’t that much evidence to say, ‘Oh, I should drink this every day,’ ” she explains.

Of course, bone broth is only as good (and nutritious) as its ingredients, stresses Marco Canora, the chef who launched Brodo broths from a nook in his New York City restaurant Hearth in 2014. Nowadays, you can scoop his products up from one of six shops or in select grocery store freezers across the northeast. Canora says that the broth that comes from painstakingly steeping bones with organic veggies over low heat is a different creature than the kind you can stick in your cart or make with a handful of bouillon cubes or powder.

One of the most sought after nutrients in bone broth, and it’s modern derivatives, is collagen—an essential component in both skin and cartilage. In theory, chugging collagen in soup form would make your skin more radiant and your joints less creaky. But as dieticians will tell you, just because you eat something doesn’t mean it’s going to do what you want it to do.

When you digest food, your body breaks it down into building blocks, so all the amino acids that make up collagen go back to being just amino acids. Those proteins are then used for a variety of work orders, like healing internal wounds. So no matter how much you’d like collagen to replace your anti-aging routine, your body may not agree.

Overall that’s a good thing, Zoumas says. Without this mechanism, if you just sucked down cups of broth every day, your body wouldn’t break down the collagen and use it where necessary.

Another claim made about bone broth is its ability to seal your intestines, which is a favorite talking point of Brodo’s Canora. “I firmly believe that our body’s ability to fight whatever ails it is bolstered by having a healthy gut,” he says.

But there’s a lot to unpack when it comes to bone broth and gut health. First off, one needs to understand the concept of a “leaky gut.” Harvard’s Marcelo Campos describes this scenario as an increased permeability in your gut, which could allow partially digested foods and toxins to penetrate the tissues beneath the intestinal lining.

This increased permeability, which can be brought on by anything from genetics to poor diet to stress, has been shown to play a role in gastrointestinal issues, including celiac disease, Crohn’s disease, and irritable bowel syndrome. Can bone broth defend against that?

Glutamine, an amino acid found in bone broth, has been tested a few times on rats as a potential solution to leaky guts. But the gastrointestinal tract of rodents and people are quite different, Zoumas says, so this concept is still hypothetical. Amidor adds that if you’re feeling like your gut needs some help, it’s a smart idea to ask your doctor about it first before self-prescribing a daily broth.

While we’re discussing bone broth claims, a somewhat proven (if not old) claim about bone broth is that it might make you feel a little better if you’ve got a cold. One study from back in 2000 found that chicken soup had a mild anti-inflammatory effect that could help mitigate upper respiratory tract infections; another study from 20 years earlier showed chicken soup helped clear out nasal fluids more effectively than hot or cold water. Of course, chicken soup isn’t exactly the same as bone broth, so take those results with a grain of salt.

The comforts of a toasty cup of soup or broth might also be an effective placebo, Zoumas says: Drinking something warm and yummy often makes you feel better, even if it’s mostly a psychological effect. So go ahead and experiment, but only if you’re of age. Bones can sequester heavy metals like lead, Amidor says, so it might be smart to limit how much broth young kids sip.

One way to see how the bone-broth claims pan out is by trying it. If you’re craving something hot and savory or looking for a way to use leftover bones after cooking, the dressed-up stock isn’t a bad idea. Just be conscious that no one food is powerful enough to fix all your health problems overnight.

“People need to put these things in perspective,” Amidor says. “If they enjoy the food and they can make it part of their healthy lifestyle, that’s fine. But they don’t have to spend tons of money on it. It’s not the end-all answer to living healthy.”