Would Rocky’s regimen really work? We asked the experts. 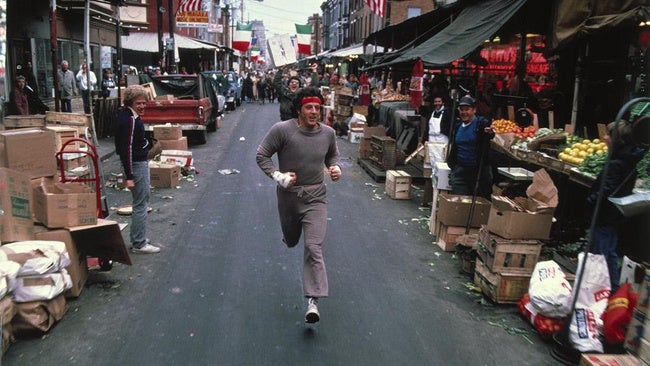 Rocky's training regimen is effective. But that doesn't mean it's right for you. United Artsts
SHARE

Even if you’ve never so much as walked into a gym in your life, you’ve probably been exposed to countless representations of physical exercise in film. But how accurate are Hollywood’s depictions of athletic training? We asked two professional trainers, Joe Holder, Nike master trainer, and Deanna Robinson, a Maryland-based health and fitness expert who works with the Redskins NFL team, to review the realness of these seven iconic movie training montages. Here’s how everyone from Rocky to Mulan stacks up:

It’s the sports drama that launched a thousand sequels: Rocky, the story of down-on-his-luck Philadelphia southpaw Rocky Balboa’s quest to beat heavyweight boxing champion Apollo Creed in a title bout. To prepare, Rocky engages in an endless series of grueling physical challenges: he runs through the streets; he exercises while holding bricks; he punches meat; he boxes; he does push-ups; most memorably, he sprints up the steps of the Philadelphia Museum of Art.

All of these things serve their purpose, Holder says, from aerobic conditioning to, in the case of those bricks, preparing him for the “strain and annoyance of heavy gloves.” Except for one.

“Just no to raw eggs,” Holder writes. “Find other ways to get protein.”

Carrying your mentor on your back isn’t a common feature of training regimens on Earth. But that’s exactly how Luke Skywalker prepared for his battle against the evil empire in the first Star Wars film. In this galaxy, Robinson writes, we’re more likely to use a weighted vest, which also, “creates more of a load when performing bodyweight exercises and increases the demand on your muscles.” A weighted vest “can increase strength and endurance-related gains.”

But there’s one thing Yoda offers that no weighted vest can provide: the mantra “do or do not, there is no try.”

Now on to Rocky director John G. Avildsen’s other famous fight film. In The Karate Kid, Daniel is the new teen in town and finds himself the target of some Cobra Kai dojo bullies. Fortunately, he meets Mr. Miyagi, a repairman by day and martial artist by night. To prepare for an upcoming tournament, Daniel undertakes an unusual training regimen, which spawned the world-famous line “wax on, wax off.”

How legit is it?

“There is research that shows that mindfulness and visualization can make you better at sports,” Holder writes, “but in this case, I think it has more to do with training the mind.” In real life, athletes often work with sports psychologists on everything from “cognitive and behavioral skills training” (like goal setting, attention control, and emotional management) to leadership skill development and team-building.

But Mr. Miyagi likely had another goal, according to Holder. “The movements associated with the chores were directly tied into the movements and joint angles necessary for karate,” he writes. “Even if Daniel didn’t know it, his teacher was hard wiring in the movements that would be necessary for fighting, so this one is actually pretty solid.”

While the original Rocky training montage might be the one we all know, the Rocky IV montage is the one true fans rank number one. “His routine seems very effective for his sport and fitness level,” Robinson writes, noting the functional aspect of his training—a way of building strength for very specific activities, athletic or otherwise.

Rocky movies are inspirational to many, Robinson writes, but “[t]he high level of training in the Rocky/Creed franchise becomes dangerous when the training program greatly exceeds the physiological capabilities of the exerciser. This ultimately increases the possibility of an injury.” Still, she writes, “the Rocky/Creed franchise has had an overall positive effect on my industry. More than a ‘don’t do this at home’ mentality, I feel it has inspired a healthy ‘no progress without struggle’ mentality.”

In the Disney animated film Mulan, a young woman goes undercover to serve in the Chinese military in place of her ailing father. In her training montage, which also gives us one of the best songs in the movie (nay, in all of Disney history), she seeks to scale an enormous pole and prove her worth to the skeptical army captain Li Shang.

“In the fitness industry we call this cross-training—using several modes of training to develop fitness and overall performance,” Robinson says. “Cross training is great to help even out potential muscular strength imbalances, prevent injuries, and as seen in Mulan’s case, even increase motivation. I’m sure it was a combination of those things that helped her to scale the pole.”

Cutting weight—shedding pounds as fast as possible, often by forcibly sweating out excess water—is a common part of training montages. That’s especially true for movies about boxers and wrestlers, both of whom compete in regimented weight classes. (There are some exceptions: In Silver Linings Playbook, directed by David O’Russell, the main character runs around in garbage bags. He’s prepping for a dancing competition.) In O’Russell’s other film, The Fighter, Micky Ward (played by Mark Wahlberg) wears a sweatsuit during aerobic exercises to get down to size. Both of these strategies are used in real life, but Holder says, “there are some inherent dangers such as dehydration and slight micronutrient issues if this [is] done [over a] prolonged [period].”

Holder’s got nothing but praise for Michael B. Jordan’s performance in Creed, the seventh film in the Rocky franchise (which tells the story of Apollo Creed’s young son, Adonis). “This training scene is pretty solid,” Holder writes. “Tempo runs to work on his conditioning, bag work, and jump rope are all pretty consistent aspects of a training regimen.” Even the chicken-catching makes sense: “Believe it or not… since it is difficult to replicate the chaos that is seen in sporting activities in a controlled environment, Adonis is having his responsive skills honed by having to chase this chicken. There are better ways to do it, but it isn’t complete crap.”

So wake up to the rooster’s crow and chase the flock around a bit—just don’t drink any raw eggs.