Most of your sodium isn’t coming from your salt shaker

It's not de salt, it's DiGiorno (and other processed foods). 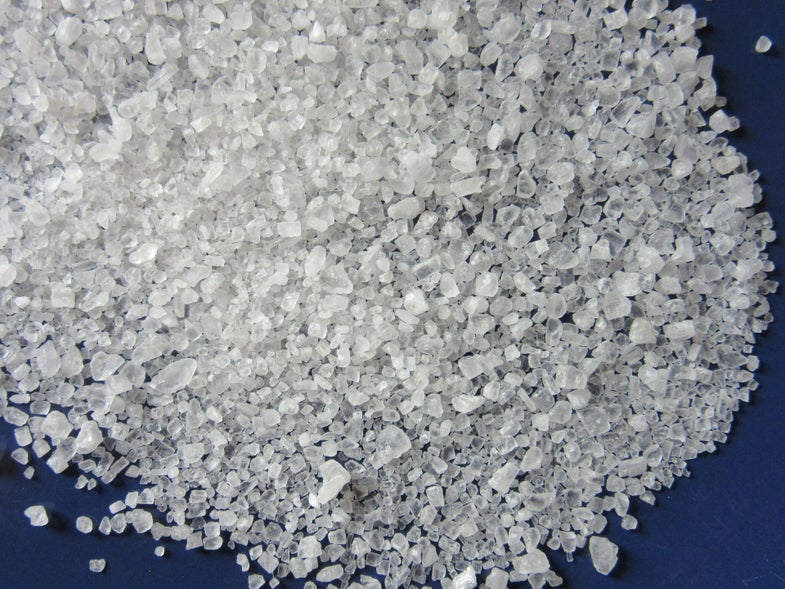 More than 4 out of every 10 Americans are avoiding salt, but a lot of us are doing it wrong. We often think that to reduce our sodium intake, we should nix the shaker. The reality is that even if the average American could stand to eliminate every grain of salt they added in the kitchen, they’d only get rid of about 11 percent of their total intake.

The science is also a bit contentious on whether you need to reduce your salt intake in the first place. One recent study in the journal The Lancet claimed the current recommended salt intake of 5 grams per day is perfectly safe, and that there was no need to push people to reduce as much as possible. Other cardiovascular health researchers have criticized the study, noting that a 2016 paper by the same authors had similar fundamental problems, none of which were taken into account in this more recent one. For instance, both studies found that people who ate the least salt had a higher risk of death, which the authors argued indicated that a moderate sodium intake is actually helpful. They failed to acknowledge that perhaps people with health problems were the ones taking in the least salt, at the recommendation of their doctors, and that these people are also more likely to die.

There is certainly plenty of research that shows salt intake is associated with high blood pressure, and countries like Japan and the United Kingdom that have managed to reduce their average intake have seen corresponding drops in rates of strokes.

But let’s assume that you’re set on cutting down your salt intake. Maybe your doctor has strongly recommended it (which should mean a lot more than a single study on the subject). Perhaps you know you’re eating much more salt than the daily recommended intake, making the findings of this latest study moot. Either way, you might be tempted to throw out your salt shaker and call it a day—which is a mistake.

One of the big challenges in reducing how much salt we all eat is the fact that sodium is insidious. We think of our daily salt intake as however much we add as we cook, or the amount we shake out at the table. Some institutions, like the American Heart Association, list recommendations like cooking pasta without salt, or using onions to boost flavor instead of salted seasonings. But alongside those fairly easy-to-take suggestions is a much more important statistic: 71 percent of the average American’s salt intake comes from outside their home.

Let’s break that down for a second.

It’s quite challenging to understand real dietary patterns. Often, studies rely on participants keeping careful logs of everything they eat, then estimating individual nutrient intakes based on the listed foods. Two studies in particular, however, have used more clever methods.

A 2017 study used a combination of a dietary log and salt samples. Participants were asked to not only write down everything they ate, but to also shake the same amount of salt that they added to their food (both as they cooked or onto their plates) into sample bags. The researchers then measured those samples to see how much salt each person was adding themselves. They found that just five percent of total sodium intake happened at the table, and six percent got added during food prep. That’s 11 percent total, which is less than the 14 percent of salt that’s inherent in our food. Even fresh fruits and veggies have sodium. An apple has 2 milligrams. A cup of tomato has 10 milligrams. Those individual items add up, but processed and pre-prepared food blows nature sources out of the water. Some 71 percent of the average person’s daily salt intake comes from processed food and restaurants.

Those numbers are slightly different than an earlier study. In 1991, researchers at the Monell Chemical Senses Center gave subjects special salt shakers, one for table use and one for cooking. Everyone was instructed to carry the table use shaker everywhere, such that any salt they personally added to their food would come from that source. At the end of every week, researchers weighed each shaker to determine how much the person consumed from each shaker. They also double-checked their work by attaching a tracer molecule to the sodium. This tracer enabled the scientists to determine how much of each person’s salt intake came from that shaker, because the way you measure salt intake is in pee. All you have to do is measure how much sodium is in urine, then figure out the fraction that’s got the chemical tracer—that’s how much salt they’re adding. Everything else comes from outside their house.

That’s quite close to the more modern estimates, especially considering that dietary patterns may have changed in the intervening years.

So where is this 71-77 percent of salt coming from? Restaurants certainly take some blame, as they tend to use salt and fat in higher doses than most home cooks do, but the biggest culprit is processed food.

The American Heart Association recommends no more than 2,300 milligrams of sodium per day, and would ideally like to see us each get down to 1,500 milligrams. That’s about three-quarters of a teaspoon. Most Americans actually consume around 3,400 milligrams.

And it’s easy to see why most of that salt comes from processed food when you look at nutrition labels and multiply out to a reasonable serving size. A DiGiorno’s Original Rising Crust Four Cheese pizza, for instance, says it has 670 milligrams of sodium in one-sixth of a pizza. Assuming that you’re a normal human who is going to eat more than one slice of a small frozen pizza, you’re actually going to take in more like 2,000 milligrams of sodium in one sitting. A single can of Campbell’s Tomato Soup has 1,200 milligrams of salt. A Stouffer’s Macaroni & Cheese for one has 1,720 milligrams. Eating any one of these foods would get you to about your healthy limit of salt for the day, and well beyond the 500 milligrams that you actually need for your body to function properly.

The good news for folks looking to cut back on salt is that you can lose your taste for salty food. Though even babies love the taste of sugar, humans have to learn to love salt, and that means we can reverse the craving. But good luck changing your palate by hiding your salt shaker. In 2010, when the Institute of Medicine issued guidelines on how to reduce sodium intake, they specifically cited processed products as the main barrier to decreasing people’s preference for salty food. The authors of the report noted that “continued exposure to high levels of salt in the food supply likely reinforces the preference for a higher level of intake,” and that “the environment promotes adaptation to a higher salt preference, even for individuals who prefer a low sodium dietary pattern, because it is difficult for them to sustain avoidance of inadvertent consumption of foods with high amounts of added salt.”

But food manufacturers aren’t likely to lower their products’ sodium content voluntarily. The simple fact is that salt makes processed food taste good. In Salt, Sugar, Fat author Michael Moss discusses how companies use salt as “the great fixer.” Lots of processed food tastes genuinely bad without loads of salt. To prove it, some researchers at Kellogg made versions of their most popular products with no salt. Moss wrote that “The Corn Flakes tasted like metal filings, the Eggo frozen waffles like straw. Cheez-Its lost their golden yellow hue, turning a sickly yellow, and they went all gummy when chewed. The buttery flavor of the Keebler Town House Light Buttery Crackers, which contained no actual butter to start with, simply disappeared.” They even showed the drop-off point. Oscar Meyer ham tastes okay with 37 percent of the salt removed, but drop it by another 3 percent and Moss wrote it tastes “like rubber.” No company is going to put out a ham that tastes bad, even if it’s better for their customers’ health. And that means it’s up to you to simply not buy those products in the first place.

Without salty, processed foods in your diet, you will learn how to appreciate foods with less sodium. Soon those same products will taste unbearably salty. You won’t even want to eat them. All the while, you can keep using that salt shaker. Even when told to add as much as they wanted, people in that 1991 study only added around 800 milligrams, well below even the 1,500-milligram ideal level of sodium intake. Shake it all you want.