From hunting to foraging, the ash-hardened clues give us a rare look at how society operated thousands of year ago. 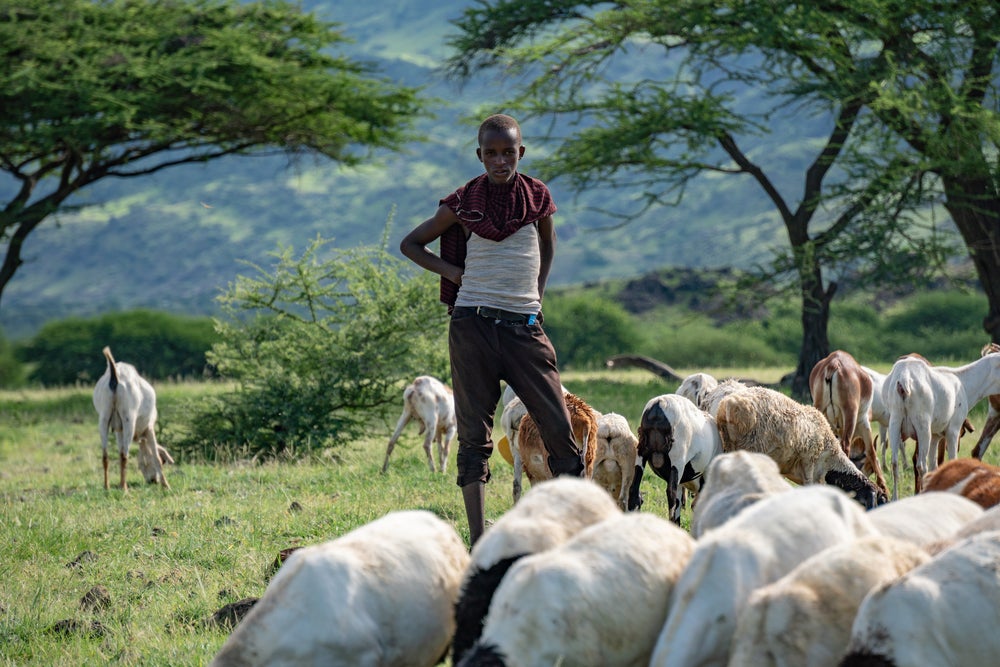 The Maasai are the current residents of Engare Sero, a region in Northern Tanzania. They've shifted from the nomadic lifestyle that prehistoric humans in the area had. Tomas Adzke/Deposit Photos
SHARE

William E.H. Harcourt-Smith is a research associate in the Division of Paleontology at the American Museum of Natural History and associate professor in Anthropology at Lehman College, CUNY. Briana Pobiner is a research scientist and museum educator at Smithsonian Institution. This story originally featured on The Conversation.

When it comes to reconstructing how ancient creatures lived, palaeontologists like us are as much detectives as we are scientists.

We’re used to partial evidence, dead ends, and red herrings. It’s especially hard to reconstruct ancient behaviors, something we are particularly interested in. We must rely on either skeletal remains or the physical things left behind by ancient people to deduce anything about their lives, be it what they ate, how they moved or the origins of complex behaviors like creating tools or communicating with language.

Prehistoric footprints are a remarkable and precious source of evidence for the behavior and biology of ancient organisms, capturing a snapshot of their lives in deep time. In a new paper in Nature Scientific Reports, our research team documented and interpreted an extraordinary site in northern Tanzania called Engare Sero, where hundreds of human footprints were preserved in volcanic ash many thousands of years ago.

It’s the most abundant assemblage of ancient human footprints currently known from Africa and suggests this ancient community had a division of labor between the adult females and males.

Footprints fill in the story

Footprints are unique in that they are a preserved moment in time when an animal moved across a landscape and left traces of its movements imprinted in the ground.

While they cannot tell you too much about how an animal looked, they can be surprisingly useful for reconstructing many other aspects of their biology. Footprints can tell you how fast an animal was running, where it was going, and sometimes even if the animal was solitary or moved in herds.

For the human lineage, footprint sites have been especially important in furthering scientists’ understanding of our own evolutionary journey. The iconic 3.66-million-year-old paleontological site of Laetoli in Tanzania, for instance, provided some of the earliest definitive evidence of upright walking in our ancient ancestors.

While Engare Sero is much younger than Laetoli, it provides a fascinating snapshot of a time period when our own species, Homo sapiens, was on the rise.

Ancient tracks in the shadow of Oldoinyo L’engai

When you walk along wet sand on a beach, your footprints might last for a few minutes, or a few hours, before being washed away by the ocean. But if you were to walk in wet volcanic ash and leave your footprints behind, and the ash then dried nearly as hard as concrete, your footprints could last thousands—or even millions—of years.

That’s exactly what happened thousands of years ago when a group of at least 20 prehistoric modern humans walked through a volcanic mudflow produced by the Oldoinyo L’engai volcano, still active today in what’s now Tanzania.

The local Tanzanian Masai have known about this set of ancient human footprints at Engare Sero for a while. When our research team leader, geologist Cynthia Liutkus-Pierce, first visited the site in 2009, only 56 footprints had been exposed by natural surface erosion—but she was still floored by what she saw.

Our research group—including archaeologists, anthropologists, biologists, geologists, statisticians, and other scientists—went on to uncover, document and analyze an astonishing 408 total human footprints. Using two different dating techniques that measure radioactive decay in the material that preserved the footprints, we dated the footprints to between 6,000 and 19,000 years ago. In this time period, modern humans were likely the only hominin species left in Africa, and had already spread to many other parts of the globe.

What the prints describe

We meticulously traced each footprint trail and analyzed the size, spacings, and directions of the footprints. We determined that 17 of the footprint tracks were created by a single group of individuals walking at the same time in a southwesterly direction. Based on a sophisticated statistical analysis using a vast comparative data set of modern foot dimensions, this group likely consisted of mainly 14 adult females, with two adult males and one younger male.

Modern foragers such as the Hadza in Tanzania and the Ache in Paraguay often include groups of adult females cooperatively gathering food together, with occasional visits from or accompaniment by adult males. This scenario seems a plausible fit for the group structure and patterns of movements we inferred at Engare Sero. The footprints may indicate cooperative and sexually divided foraging in this ancient human community.

While we don’t know what the community of people who made these prints was specifically like, we know that hominins in Africa at this time were engaging in complex behaviors, and that they were members of our own species, Homo sapiens. They may have been foraging along a lake shore, looking for plants or shellfish to eat. They may have been carrying bows and arrows to hunt animals like the antelopes, zebra or buffalo who left other footprints nearby. Maybe these people looked up when they heard another rumble of the nearby volcano, which had erupted recently enough that the ash underneath their bare feet was still soft.

There are also six other footprint tracks heading in an almost perfectly opposite direction, to the northeast. Most of the people who made these footprints were walking at different speeds and at least one was running, suggesting that these tracks were not created by a single group traveling together.

Preserving Engare Sero for the future

Several of the human footprint tracks lead to a nearby sand dune to the north. We’ve purposefully left any footprints preserved under the sand dune unexcavated for now, until we can work with the Tanzanian government to develop a conservation plan to track and limit erosion of the footprints.

The hardened ash is remarkably resilient to erosion from water and wind. Still, thanks to the Smithsonian’s 3D Digitization Program, we have meticulously captured three-dimensional data for each of the footprints so we can trace any natural destruction of the prints over time. You can even download 3D files of a few of the Engare Sero footprints, in case you want to 3D print your own copies.