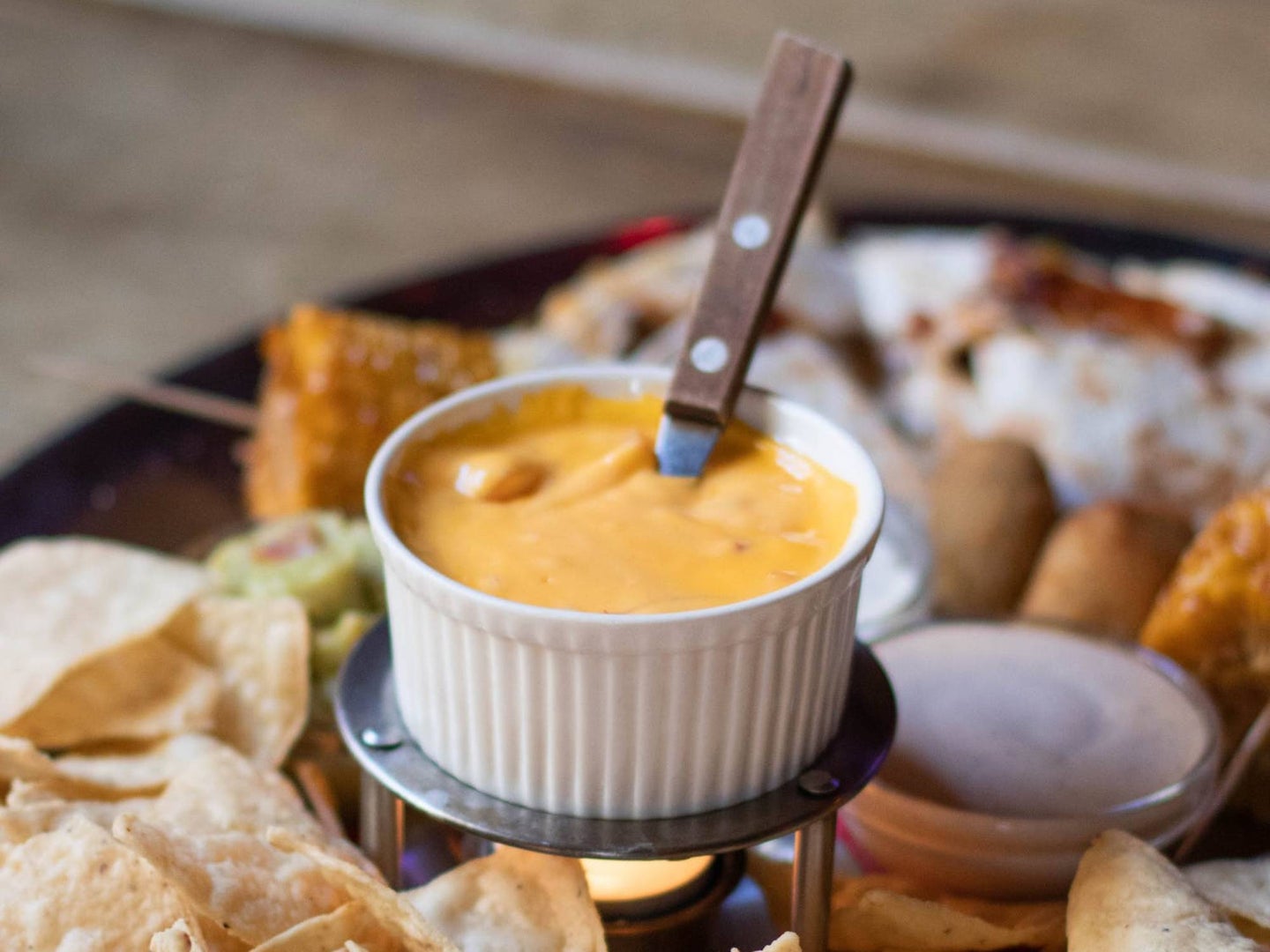 Some call it fondue, and some call it queso (to the horror of Spanish speakers everywhere). Even if you describe it as “that toxic yellow stuff I shouldn’t be eating,” it’s likely that you’ve occasionally succumbed to the smooth, lustful texture of cheese sauce. And we’re definitely not here to judge—it tastes oh, so good.

Super Bowl Sunday is right around the corner, and it’s the perfect excuse to consume absolutely absurd amounts of nacho cheese sauce. And while you can definitely just buy some dip, there’s no science in that. Instead, grab your favorite Goudas, Gruyere, and pepper jacks; a glass of white wine; and some sour salt—we’re making this iconic ballpark goop ourselves.

The science behind good cheese sauce

Because cheese can melt at high temperatures, you’d think that heating up your favorite fromage should eventually yield a steamy, creamy sauce. But unfortunately, it doesn’t work like that.

To understand why, we need to look at the molecular structure of cheese. You see a solid block of white-to-yellowish goodness, but cheese is really more like a sponge. Inside that hunk of cheddar, calcium binds long protein strands called caseins into a type of web, and water and fat molecules occupy the space between those interconnected threads.

This type of protein structure is highly stable. That means when cheese starts to melt, it loses water and fat, but the caseins stay pretty much the same, though they may become more elastic.

[Related: I spent 13 hours trying to make mac and cheese in a bag. It was a disaster.]

To create the smooth, creamy texture of cheese sauce, you’ll need an emulsifier: an ingredient that helps different compounds that usually don’t mix well together (like water and fat), bind in a stable way. This is where sodium citrate (aka sour salt) comes in.

At a molecular level, sodium citrate and other emulsifiers rearranges the basic structure of the cheese, breaking down caseins into shorter strands that can efficiently hold onto water and fat molecules. This allows the cheese to retain its moisture and results in that smooth, Velveeta-like texture we love so much. But sour salt is not the only way to bring your cheesy dreams to life.

“The easiest way to replace it is with American cheese, which uses things like citrate,” says Pat Polowsky, a food scientist and cheese expert.

And although you could mix slices of this radioactive-looking-yet-delicious food to the recipe, and be satisfied, the folks at Modernist Cuisine say it has the potential to overwhelm any other flavors you’re trying to get into your cheese sauce.

Pick a cheese, any cheese

There are a lot of recipes and guides to making cheese dip, but the simplest, most flexible out there is Modernist Cuisine’s (a Reddit favorite), as it requires no roux, no cornstarch, no milk, and no butter—just cheese, water, and some sodium citrate. The proportions are simple, too. Just add around 2 teaspoons (11 grams or 0.4 ounces) of sodium citrate for every 4 cups of cheese and you’re good to go. And that’s 4 cups of any cheese you want, as long as you follow some basic rules.

A bag of shredded cheese from the grocery store might seem like an easy shortcut to delicious nacho sauce, but you’re almost guaranteed to lose your way. This type of product includes additives that prevent it from clumping and melting in the bag, which is the opposite of what you want with your dip sauce. Just buy some blocks of cheese and grate them yourself.

[Related: The one ingredient you need to clean the dishwasher and four other gross household items]

Balance the young and the old

If you want to mimic the nacho sauce you find gracing stadium or bowling alley nachos, you can definitely go for a full-on American cheese mix. But if you want to make it less bright, or create a more sophisticated flavor, you can combine any number of cheeses as long as they’re not too old.

“It’s often best to use a majority of a good melting cheese as a base,” says Polowsky. To get the kick of stadium cheese nachos, he recommends adding blue cheese to accentuate the flavor, noting: “This is what Kraft Mac & Cheese powder does.”

When you make your base, keep in mind that semi-hard to hard cheeses, which have an average moisture content of 45 to 60 percent, work best. Among these you’ll find classics like Gruyère, Stilton, Fontina, Tomme, Muenster, and Camembert.

“If you want to use a very hard cheese such as Parmesan or aged Gouda, use them in combination with other semi-hard cheeses and limit them to no more than 30% of the total weight of the cheese mixture,” says Nathan Myhrvold, Modernist Cuisine founder and co-author of the Modernist Cuisine: The Art and Science of Cooking. In such cases, he recommends you compensate for the dryness of the hard cheese by adding up to 10% more liquid than indicated in their recipe.

[Related: The weirdest things we learned this week: holes in people (and cows), illegal cheese, and the world’s worst dairy disaster]

Cheese is a nearly perfect creation, but sometimes we can make it even better by adding some spices and other flavorful goodies. Add some spicy bites to your sauce by chopping some jalapeños, or even replace some of the water with jalapeño juice—the liquid the peppers come in when you buy them in a jar.

But don’t just go and do a 1-to-1 replacement of all the liquid with this spicy elixir, Polowsky says. These juices often come with vinegar, salt, and even their own preservatives, which might alter the final texture of your sauce. Instead, try replacing only some of the water or beer (a common alternative for hydrating dip), and if your sauce becomes too runny, you can always add more cheese to make things thicker. In a pinch, dissolving cornstarch in cold water and slowly adding it to your sauce while you stir will also do the trick.