Archive Gallery: Mail Order Kits, From the Back Pages of PopSci 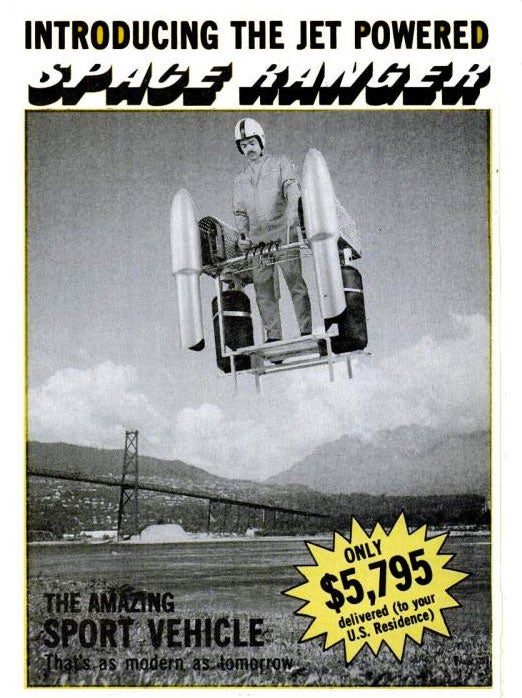 Radio hats. DIY jetpacks. Even those of us who never experienced a time when you could purchase science projects for $4.95 and telescope lenses for $1.95 can’t help feeling a twinge of longing looking at these crowded, black-and-white illustrations.

A part of their charm lies in the element of surprise. Nowadays, you can scour a product’s reviews online and zoom in on its photos before committing to a purchase. But magazine coupons are risky. Like Calvin, you could wait six weeks for a propeller beanie only for it to break upon assembly (and for your pet tiger to scoff when you demonstrate it for him). On the other hand, you could rip open the box to find something completely wonderful.

We’ve gathered a few of the more promising-looking coupons here, with an emphasis on build-it-yourself projects. Long story short, these kits became more sophisticated over time. In the 1920s and 1930s we advertised DIY phonographs and erector sets. By the mid-1970s, readers could purchase DIY jetpacks and kit cars.

You’d be surprised at what you can build from a kit. In addition to jet powered aircraft, readers could buy construction packages for electronic organs, fireplaces, weather stations, dome houses, atomic energy labs, and trailers.

Can’t afford a phonograph? Try building one yourself. The Modern Phonograph Supply Company offered blueprints, diagrams, and metal parts to customers who were confident enough to construct 1919’s hottest gadgets by themselves. The Makafone cost just one-fourth the price of a regular machine of equal quality, came with a bundle of free records, and could be sold for a profit of $50 – $75.

During the holiday season, we advertised A.C. Gilbert’s No. 7 1/2 Motorized Erector set as a last-minute Christmas present. What boy wouldn’t uphold “25 pounds of scientific thrills” as the world’s greatest toy? As the illustration shows, this kit could actually produce hundreds of different steam shovels, ferries wheels, airships, automobiles, and more. The kit also came with a toy motor for additional realism.

Do-it-yourself telescope kits might be common nowadays, but you’d be hard-pressed to find parts that cost just $1.95. Brownscope’s 100x telescope lens kit, which was suited for refracting telescopes, came with two astronomical eyepieces and one polished objective lens. As if you weren’t saving enough money by buying an inexpensive lens, the advertisement also recommended making a profit by charging people to look through your newly-upgraded telescope.

A 12-foot trailer for $299? Sounds like a sweet deal to us. DIY trailer kits from U-BUILD-IT came with everything you could possibly need for a basic shell: windows, doors, exterior panels, tires, roof ends, and a chassis, to name a few. The kit required no experience and no expensive tools.

Now, this advertisement is a little vague about how the product actually works, but what can you expect from a $2 mystery gadget described as a “magic art reproducer”? According to the description, this tool would turn real-life objects into faint line drawings. With a little bit of tracing, talentless artists would be able to sketch everything from the human body, to bowls of fruit, to blueprints at a professional level.

While fine organs take years of training to construct, this DIY kit allowed just about anyone to build their own electronic organ for just $18.94. You could also order a 10-inch LP demonstration record for further instruction.

While a DIY fireplace seems like a challenging, even hazardous, home project, The Majestic Company claimed that you could build their wood-burning fireplaces without any expensive tools or masonry. It could fit in any room (except the bathroom, of course) and came in a variety of styles. You could choose from a corner fireplace, a front model, and pick either real brick tops or synthetic brick tops.

Speaking of hazards, how about the Bensen Aircraft Corporation’s build-it-yourself gyrocopter? Anyone who bought this would be the envy of his neighborhood. The gyrocopter came with interchangeable wheels and floats, required less landing space than a plane, and would glide gracefully to the ground if the engine broke.

While most of our DIY kits catered to home construction and car modification, we certainly indulged readers with a penchant for science projects. For just a $1.00 enrollment fee, and $4.95 per kit, you could make your own analog computer, light transmitter-receiver, weather station, atomic energy lab, and more. Members could either receive the kit on a monthly basis, or they could order all the projects at once for $49.50.

Maybe we should just end the gallery here because clearly, nothing can beat this mail order item. The Space Ranger could reach a height of 5,000 feet, could take off and land vertically, and ran on “easily obtainable fuel.” Despite its fantastical appearance, the Space Ranger could be easily assembled in just a few days (supposedly). The entire thing cost 250 pounds and was available for a mere $5,795.

Embarrassed by your unsightly Corvair? Try outfitting it with a glamorous bolt-on body. With a little bit of tinkering, you could become the proud owner of a T-Bird, Porsche, or Ferrari, without going into debt over your purchase. Unlike the original sports cars, though, the bodies of kit cars are made of fiberglass coated in polyester resin instead of sheet metal.

This isn’t exactly a DIY project, but we couldn’t resist including it in our roundup of mail order items. Before fog horns became the vigilant civilian’s weapon of choice, people carried cartridges of tear gas in their purses as a defense against attackers. Pens could shoot tear gas at a distance of 15 feet. Unlike most of the other kits advertised in the back section of our magazine, this one could be ordered for free. Safety first!

Long before pocket-sized music devices were invented, Victor T. Hoeflich’s Radio Hat was the frontrunner in portable entertainment. The circuit was sewn into the hat’s lining, while the radio was powered by a small external battery pack. Despite its kooky appearance, this hat was a triple threat: for just $7.95, you could make a fashion statement, shield your eyes from the sun, and listen to your favorite programs.