How to keep latkes crispy for eight days and nights

Moisture is the enemy of fried potatoes. 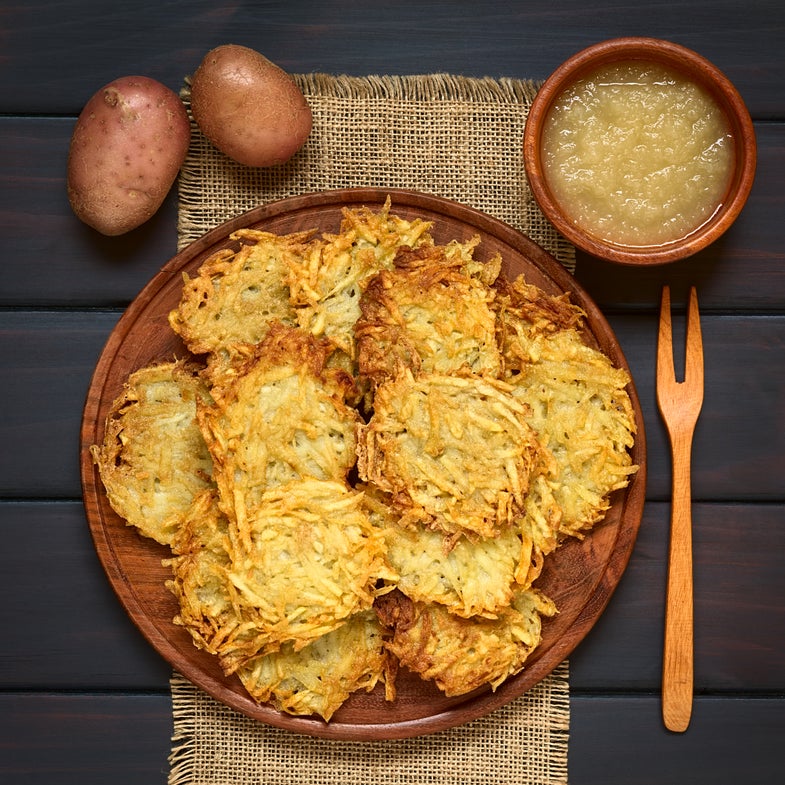 Hanukkah is the Jewish festival of lights, an eight-day holiday celebrating—among other things—a miracle in which a jar of oil, only enough to provide light for one night, burned for eight. While it isn’t a particularly important religious event, it does come with one of the best traditions: eating fried foods to commemorate that long-lasting oil. So when Hanukkah begins tomorrow night, I’ll be biting into on my favorite holiday foods, the potato pancakes called latkes.

My mom, obviously, makes the very best latkes of all time, crisp, browned, and craggly-edged. When I asked her how she gets latkes so crispy and delicious, she gave me a pretty simple answer: Just squeeze all of the water that you possibly can out of the potatoes before frying them. (This trick also works for shredded hash browns, which are almost the same thing as a latke.)

Turns out, science supports this advice. To fry food, you must first heat a pan of oil to around 350°F. When potatoes hits the hot fat, any water they contain vaporizes into steam, because H2O boils at the much lower temperature of 212°F. If you’re watching the oil, you’ll see the pan fill with bubbles as this steam escapes.

When a piece of potato loses all this water, its surface dehydrates. Only then can the hot oil work Maillard reaction magic, breaking down the latke’s sugars to create more complex flavors and turning it brown in the process. When you start with less water in your potatoes, this dehydration happens faster and the potato bits brown sooner. That means the latkes will spend less time sitting in the pan and soaking up crunch-reducing oil. In other words, squeezing out the water before you start will make the Maillard reaction happen sooner, giving you crispier potato pancakes.

One caveat: Despite our headline, not even the crunchiest latkes will stay crisp and delicious for eight straight days and nights. That would take a miracle.

A little preparation will make your time in the kitchen go more smoothly. I recommend taking the batteries out of the smoke detector, and inviting your friends over to help shred potatoes and eat the results. My mom recommends covering every nearby surface with aluminum foil to prevent the inevitable oil splatter from ruining your countertops. And remember to be careful when cooking with hot oil—nobody likes fried human.

Start by shredding whatever variety of potatoes you prefer—I like russets. Depending on their size, two or three potatoes will yield about two or three dozen latkes. As we discussed, the more you dry out your mound of shredded potatoes, the better your latkes will be. So squeeze out those pieces once, twice, or more. And when you think they’re done, squeeze them one more time just to be sure.

After your arms are a little sore, add in the rest of the ingredients, starting with the onions. In addition to adding flavor, these veggies prevent the potatoes from oxidizing, which can turn your tubers brown before you start cooking. I think a ratio of about one onion to every three potatoes is perfect, but if you want your latkes more or less onion-y, trust your own preferences. Shred up the onion and mix it in with your squeezed-out potatoes.

Next, whisk up a few eggs. I recommend one egg for every three or so potatoes, but again, go with what feels right to you. Add them to the potatoes and onions, along with a few spoonfuls of flour. You need enough filler to stick the potatoes together without bogging them down, so add a little at a time until you get the right mix. Season with lots and lots of salt, and a dash of pepper.

With the potatoes taken care of, start heating about an eighth of an inch of oil in a big pan. A neutral oil with a high smoke point, like vegetable oil, will work perfectly. Shape the potato mix into circles a couple inches wide, although you can go bigger if that’s what you prefer. Then fry them in batches for a few minutes on each side, taking care not to crowd the pan, until the latkes are browned and perfect. To blot off the excess oil, let them cool on layers of paper towels.

Traditionally, you eat latkes slathered with (or dipped in) sour cream, applesauce, or both. I also like them for breakfast, topped with a runny-yolked fried egg or covered in smoked salmon. But let’s face it—fried potatoes are good with just about anything.

WARNING: Hot oil can cause extremely painful burns, so cook with caution.