How to test your tap water for lead

Nearly half of Americans suspect that their water might be unsafe. 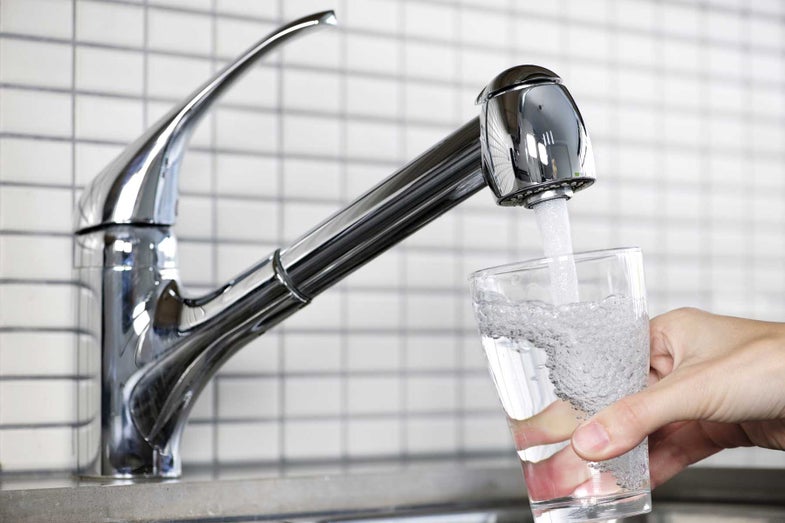 People don’t trust the water that comes out of their tap, and not just in places without adequate sanitation. A 2016 survey by The Meyocks Group, an Iowa-based marketing firm, found that 43 percent of Americans either believe their tap water is unsafe to drink or are unsure of its safety.

In the wake of the Flint water crisis, that fear isn’t wholly unexpected. The city’s troubles began when the state switched the water supply from Lake Huron to the notoriously polluted Flint River, failing to properly treat it to kill pathogens and prevent lead pipe erosion. But the mistrust came when—as residents complained of foul water, disease, and even death—the Michigan Department of Environmental Quality continued to claim that the water was safe.

Luckily, homeowners who suspect that their drinking water might be contaminated have more options than ever before. In New York, for instance, folks can order a free at-home testing kit. And most hardware stores offer a similar system for purchase. We pitted those up against a new product called Tap Score to see just how accurate—and easy to understand—the results are.

Most NYC locals claim to guzzle some of the best water in the country. To hear them talk, you would think the city’s soft water begins in a mythical land known as “upstate,” where it’s filtered through pristine forests and a unicorn’s mane before it descends onto the city, via a canal of pure angelic light, to create the best bagels, pizza, and drinking water known to human kind.

An Environmental Working Group (EWG) analysis of 100 municipal tap water systems found that New York City had six contaminants at levels above the health guidelines established by either a federal or state authority (though lead wasn’t among them). EWG, it should be noted, has been criticized in the past for overstating chemical risks, especially those related to food and drink. That said, EGW’s overall assessment of New York City’s tap water as compared to the rest of the country is… well, it falls short of the fantasy set by locals, but the tap is just fine.

How good is our water, really?

Popular Science’s commerce editor Billy Cadden lives in an older part of the city than I do, where buildings are more likely to use lead somewhere in their plumbing system—it’s been phased out ever since scientists confirmed how dangerous the metal can be.

So Billy opened his home (and his taps) to three tests.

Using the free service from New York City’s Department of Environmental Protection proved pretty straightforward. First, you abstain from water use in your home for 12 hours—there’s generally more lead in the liquid if your pipes have settled a bit. You then fill collection bottle one (the yellow bottle) and let the pipes flush for one to two minutes before filling bottle two (the red one). You bundle the whole thing up in a package and mail it back. We got the results about three weeks later.

The city found that the first draw had 1 microgram of lead per liter, well below the federal action level of 15 micrograms per liter. The second draw, after Billy had let the water flow for a bit, had no detectable lead at all. The test was reassuring, though the results were in a form letter that wasn’t exactly user-friendly.

But in the wake of Flint, many people are understandably distrusting of reassurances from government agencies. How could we know the test was accurate? Then there’s the fact that the test only looks for lead; it may be a hot-button contaminant right now, but there are certainly other things that could make your tap water unsafe.

Our second round used a “First Alert” home test (sold online and in many hardware stores) that promised to detect not only lead, but also bacteria, pesticides, nitrates, chlorine, hardness, and pH. If you have lead pipes, acidic water can cause the lead to leach out. That’s essentially what happened in Flint. Because water managers failed to add an anti-corrosive agent (as a cost-cutting measure), water from the Flint River ate away at the pipes and pulled lead into the drinking supply.

Contaminants are broken down into individual tests, each requiring a separate vial of water or testing strip. Like the test done by the city, we were in the clear for lead. We also came up either negative or within normal range for everything else, which certainly suggests that Billy can continue to happily drink his tap water.

This test certainly gets points for immediate gratification. With the exception of the bacterial test, which took 48 hours, we didn’t have to wait more than 10 minutes for any result. For less than $15 on Amazon, it’s a good option for someone looking for quick reassurance.

Of the three tests that we took, Tap Score was the easiest. It also had the most comprehensive results, including measurements for things like copper (which only makes you sick at very high levels, but can kill your goldfish at a much lower threshold), hexachlorobutadiene (which can affect the kidneys), and isopropylbenzene (which may increase risk of cancer). But Billy did not dig the delayed gratification.

With Tap Score, you have to fill two vials—much smaller than the ones the city had sent—mail them off, and wait for them to get back to you. Still, it was fun getting a cheerful email telling us that our water ranked in the 99th percentile for tap water quality.

“You’re living in the best possible scenario,” says John Pujol, who created Tap Score with his company Simplewater. “You have this fantastic water system in New York City, a big, rich, dense population where people are actively on top of problems. That’s a luxury. But for 20 to 30 percent of Americans that live in communities that are much smaller, either these issues never emerge—so the water system doesn’t feel the heat to solve problems—or it does emerge, and you have a water system that knows it has a problem but doesn’t have the funding to fix it.”

The goal of Tap Score isn’t really to test water like New York’s, but for small municipal systems and the 40 to 50 million people who are on wells, and maybe wouldn’t ordinarily get their water tested—or know what to do with the results.

“It’s really the interpretation of the water that other tests lack that sets Tap Score apart,” says Pujol. “If it’s a municipality, they’re only going to test your water for certain controlled substances that are managed by the EPA, but those are by no means the full set of parameters anymore. It’s been around 10 years since the United States Environmental Protection Agency (EPA) has introduced any new standards.”

In the interim, companies have introduced thousands of new potential contaminants.

“So, what we seek to do is not just test for those regulated contaminants, but go a little bit further and test for pharmaceutical compounds,” says Pujol. “We test for unregulated but potentially dangerous compounds that are on the contaminate candidate list. These are contaminants which the EPA is looking at, but it’s going to take them 10 years to come to any decision.”

If your test turns up positive, Tap Score offers you potential solutions. But it also costs at least a hundred bucks, and prices are higher for the most comprehensive tests.

Should I test my water for lead?

If you’re at all uncertain of your water’s safety—and you live in New York State—nabbing a free testing kit is a no-brainer. If your state doesn’t offer testing for free, consider investing in a $15 kit to ease your mind. The redundancies between our three results certainly suggest that all of the options we tried are fairly accurate, so if spending 100-200 dollars on a testing kit sounds like overkill, it probably is. But if you live in a town where municipal testing is infrequent—or if you get your water from a well you’ve never tested—it might be worth upgrading to a test that’s as comprehensive and user-friendly as Tap Score.