It's a wonderful addition to the Brachycephalus family. 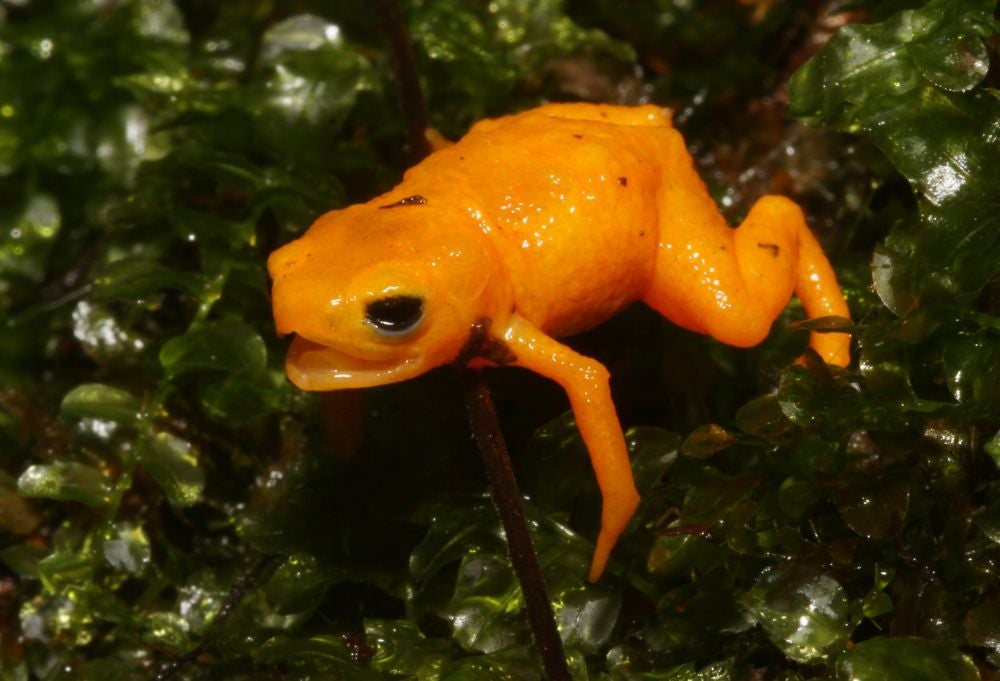 This is a tiny orange toadlet. Yes, it is really called a toadlet—that is the actual, scientific term for this being. It is less than an inch long, lives only in the Mantiqueira mountains in Brazil’s Atlantic Forest, and its bones fluoresce under UV light. It is adorable.

It is also hugely important.

The Atlantic Forest’s current range is only about a quarter of what it once was, but it is home to more than 11,000 threatened species. Upwards of 90 percent of the amphibians living there are endemic to the forest—they live nowhere else in the world. This frog (yes, it’s a frog, despite being called a “toadlet”) is one more piece of evidence for how diverse and unique this ecosystem is. And the fact that we’re still discovering new frog species proves how little we know about the very biomes we’re destroying.

This pumpkin toadlet looks almost identical to another species of pumpkin toadlet. If you were walking in the forest and came across one (they are difficult to spot, as they hide amongst the leaf litter), you almost certainly wouldn’t know this tiny frog from its cousin. But if you’re a herpetologist, like those that described the new species in a recent PLoS ONE article, you might have noticed the faded spots on its back that differentiate it from its cousin, Brachycephalus ephippium. The new toadlet, B. rotenbergae, is also a little smaller, though the two share fluorescent bones. It’s unclear what function the fluorescent bones serve, though they might have something to do with communication.

The various species of pumpkin toadlets are all quite similar, but they’ve become differentiated from one another by virtue of the unusual landscape in the Mantiqueira range. There are large gradients in altitude and changes in the humidity along the mountain chain, which makes for a wide array of different habitat types, and the massive diversity of plants living in the region makes the variation even greater.

[Related: What hundreds of pickled frog carcasses can tell us about their enormous eyes]

It might seem insignificant to add one more frog to the literal masses of frog species living in the Atlantic Forest. But it’s this cataloguing that enables researchers to fully understand just how much we’re losing when we fell trees and cut back dense undergrowth. Though these toadlets aren’t necessarily at risk (they live within a protected area), many species in this region are seriously threatened. Even as the forest disappears—along with the animals it hosts—biologists are frantically adding to the list. This particular pumpkin toadlet is just an especially adorable addition.