A mother was spotted with two kits, in addition to a lone male. 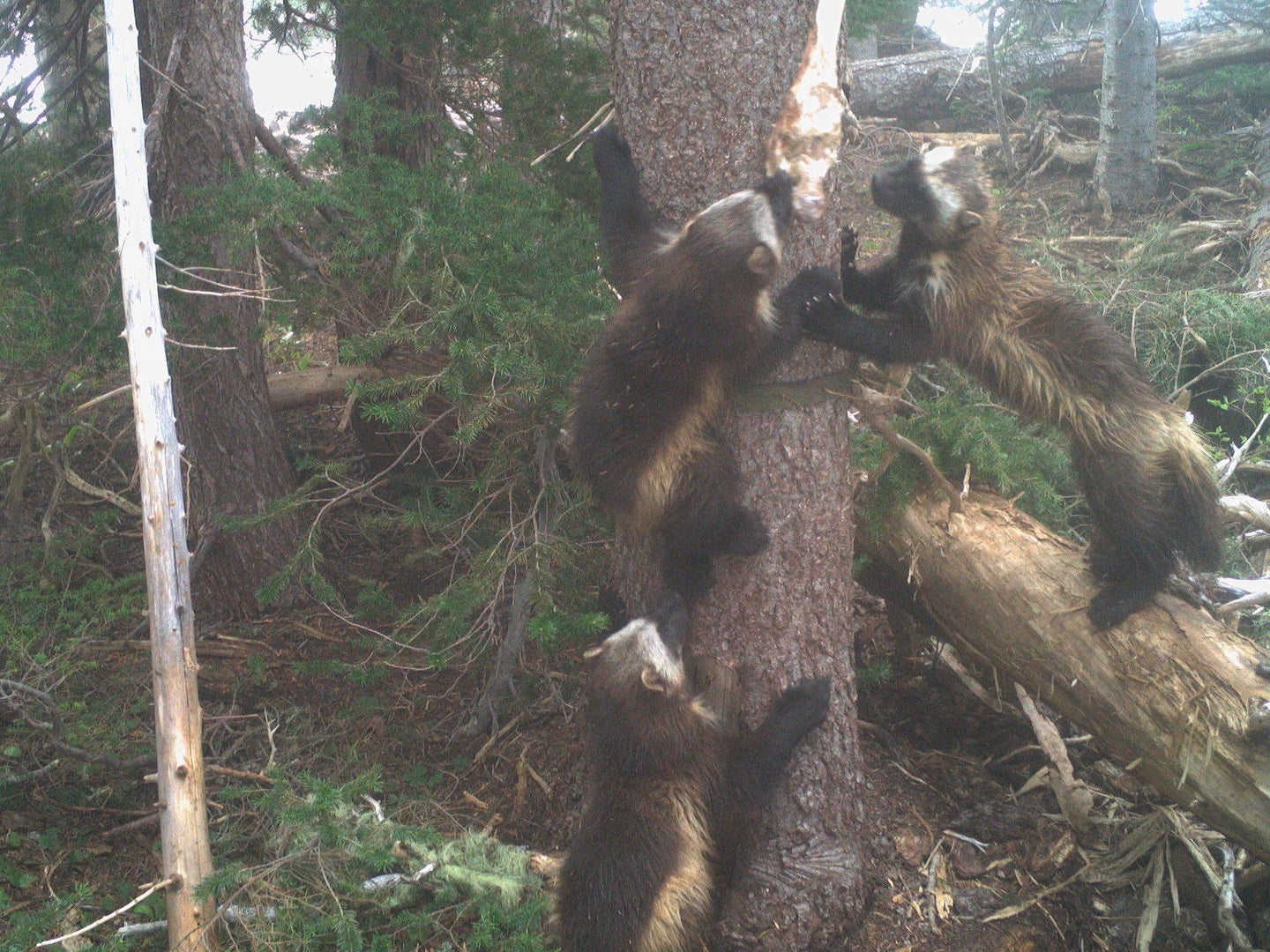 A mother wolverine and her kits ascend a tree. NPS/Cascades Carnivore Project
SHARE

Wolverines hadn’t been spotted in the forests of Mount Rainier National Park in over 100 years. These animals are so rare, wildlife ecologists struggle even now to determine how vulnerable or endangered they are. So when park wildlife ecologist Tara Chestnut and her colleagues received numerous credible reports of wolverine sightings from hikers, they set out to install a camera in hopes of catching video proof.

The first camera went up in the fall of 2018. It took a year and a half and five additional camera installations, but the payoff was worth it. When they checked their footage this past spring, the park staff found not only video of a wolverine, but a lactating wolverine (who they have named Joni) with two baby kits. “This is the first reproductive female that we’ve ever documented in the park, and the fact that she was breeding was just a really pleasant surprise,” says Chestnut. “We were just thrilled.”

With their cameras, Chestnut and her team also spotted a male, who they’ve nicknamed “Van.” But the fact that they found a reproductive wolverine with not one, but two kits, is the biggest happy surprise. Wolverine habitats have become so segmented over the years by cities and highways, she says, but these four wolverines are a sign that different interventions—like the wildlife bridges across the I-90 highway—are an indication that Mount Rainier National Park and its neighbors’ efforts to usher the animals back are not in vain.

“The last historic report of a wolverine in Mount Rainier National Park is from 1915, it was a trapping record from a park naturalist at the time,” Chestnut says. The soaring prices for wolverine pelts made them popular targets for hunters, she explains, so the wolverine population plummeted throughout the 20th century. Wolverines were hunted so extensively that now there are now only 300 to 1,000 of them in the lower 48 US states, according to Mount Rainier National Park’s press release.

Chestnut says that wolverines are sensitive, shy animals that need a lot of help to recolonize the wilderness they were hunted out of. Seeing the mother and her kits on film is encouraging, but it will be a long journey to usher more animals back to the park. A big part of that effort is documenting where and when wolverines pass through.

“If someone visiting the park is lucky enough to see a wolverine and get a picture, we definitely want that reported,” Chestnut says. “We have an online database where people can enter those reports.” Citizen science is a big part of park ecology science, she says, so if visitors see and photograph tracks or scat, or participate in surveys like with the Cascades Wolverine Project, reports that ecologists can follow up on.

“A wolverine’s poop is their calling card,” says Chestnut. The animals can use their scat not only as a way to communicate with each other about their territories and reproductive status, she says, but scientists can analyze the scat and use it to identify distinct individuals. “That way we can get good estimates of the population.”

The more data collected, the more we’ll be able to see whether this year’s sightings are part of a long-term recovery or if it’s just a fluke, says Chestnut. Scientists cannot understand wolverine migratory patterns if they don’t see when they move and where they’re going, she says, but since the animals are so elusive, scientists won’t get that information without these super vigilant tracking efforts.

But these searches, like almost everything, have been waylaid by the pandemic. Female wolverines use snowfall in the winter to build their natal dens, where they birth and take care of their young. The team at Mount Rainier was supposed to look for these snow caves at the end of the spring, after the animals have left but before the snow all melts. Chestnut says that finding and measuring these dens would have provided insight as to how the mothers choose their nesting locations, and helped them protect areas of their park that could serve as dens in the future. Alas, park staff will have to wait until next year to conduct their search.

Because of their reliance on snowfall for their natal dens, wolverines are a very climate-vulnerable species, says Chestnut, and the warming climate is shrinking their viable habitats. It’s important to preserve the full suite of wildlife, she says, and we’re trying, but it’s too early to celebrate their full comeback.