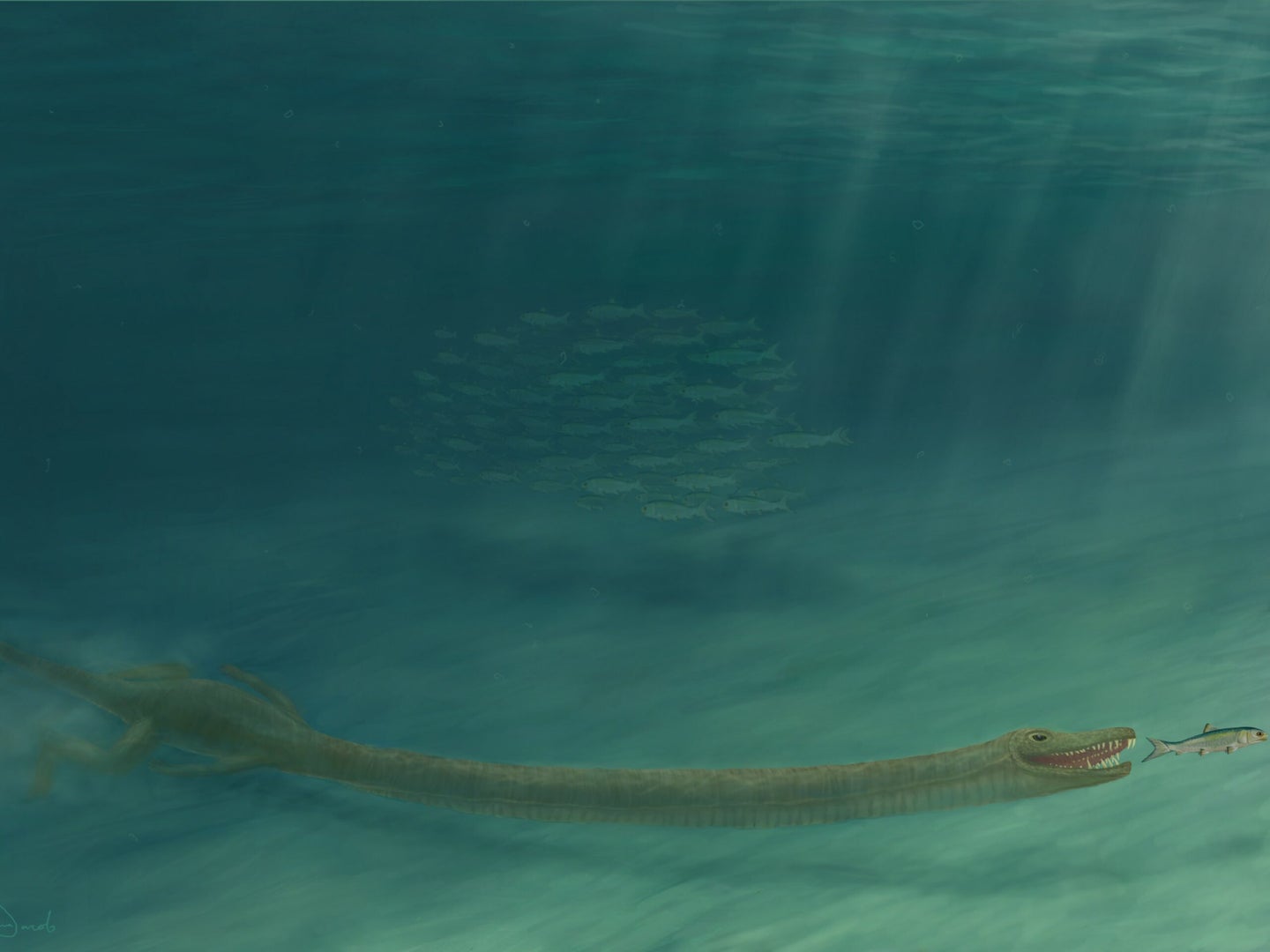 Researchers identify two prehistoric reptiles with "extraordinarily" long neck which would have been a burden on land but an advantage underwater, allowing the reptiles to approach their prey sneakily. Emma Finley-Jacob
SHARE

Around 242 million years ago, a reptile with a neck three times the length of its trunk dwelled in present-day Europe and Asia. Since paleontologists first discovered the species, which the researchers named Tanystropheus, in 1852, other scientists have found its fossilized remains in places as far flung as Germany, Switzerland, Italy, and China. However, researchers still know very little about the species, including its preferred habitat and the purpose of its long neck.

A new analysis of Tanystropheus bones from Switzerland indicates that the fossils scattered around the world actually belonged to two different species and one was much bigger than the other. The larger Tanystropheus species was adapted for an aquatic lifestyle and likely used its long neck to sneak up on unsuspecting fish. Researchers reported the findings this week in the journal Current Biology.

“What makes the Tanystropheus neck such a puzzle is not only its extraordinary length but also the fact that it is composed of only 13 vertebrae,” says Olivier Rieppel, a paleontologist at the Field Museumin Chicago who coauthored the findings. A similar aquatic reptile called Dinocephalosaurus that lived around the same time had a long neck with 33 vertebrae, he says.

Researchers thought that perhaps the smaller version of Tanystropheus was a land-dwelling juvenile that grew differently shaped teeth when it reached adulthood. This happens with some present-day reptiles; young Nile monitor lizards have pointy teeth while adults have teeth specialized for crushing, Rieppel says.

Until now, the skulls belonging to the larger version of Tanystropheus have been difficult to study in detail because the fossils were compacted by the surrounding sediments. “It’s as if you pressed plants between two books,” Rieppel says. “The individual bones are fairly intact, but all compressed and flattened.”

To get around this problem, Rieppel’s team took CT scans of a large Tanystropheus skull collected from Monte San Giorgio in Switzerland, which lies near the border with Italy. They then used the scans to create a three-dimensional digital reconstruction of the skull. They noticed several adaptations for an aquatic lifestyle, including nostrils located on top of the reptile’s snout rather than at the tip. “This makes it easier to catch air as you pop your head out of the water,” Rieppel says.

Additionally, the skull had a more flattened shape than smaller Tanystropheus skulls, which would have reduced drag as it moved through the water. In the large skull, the curving teeth had an interlocking arrangement that would have made an ideal “fish-trap,” the scientists say.

The researchers also examined fine slices of limb bones from two smaller Tanystropheus skeletons from Monte San Giorgio under the microscope to determine if they were youngsters. Reptile bones contain growth rings, which like tree rings can be used to estimate age; wide growth rings are a sign of quickly-growing bone. The researchers found numerous and closely spaced growth rings within the Tanystropheus bones, indicating that the animals had reached their mature size.

The team concluded that the large and miniature versions of Tanystropheus were two separate species. The small version kept its original name: Tanystropheus longobardicus. The researchers dubbed the larger species Tanystropheus hydroides, after the serpentine-necked hydra of Greek mythology.

The two kinds of Tanystropheus may have both been largely aquatic and occupied the same shallow waters and lagoons without having to compete for dinner. “This long neck is very difficult to carry around on land,” Rieppel notes.

The smaller Tanystropheus might have hunted shrimp and other soft-shelled invertebrates. For Tanystropheus hydroides, having an excessively long, slender neck and small head might have enabled it to approach its prey stealthily, or allowed the potential catch to unwittingly venture close.

When an animal moves through water, it sends pressure waves rippling ahead of its body, which fish can detect. “Tanystropheus, with its long neck, could sneak up on prey,” Rieppel says, “and the head would be at the prey before the pressure waves generated by the bulky body would have arrived.”