In a recent agreement, officials committed to ramping up thinning and burning across the state. 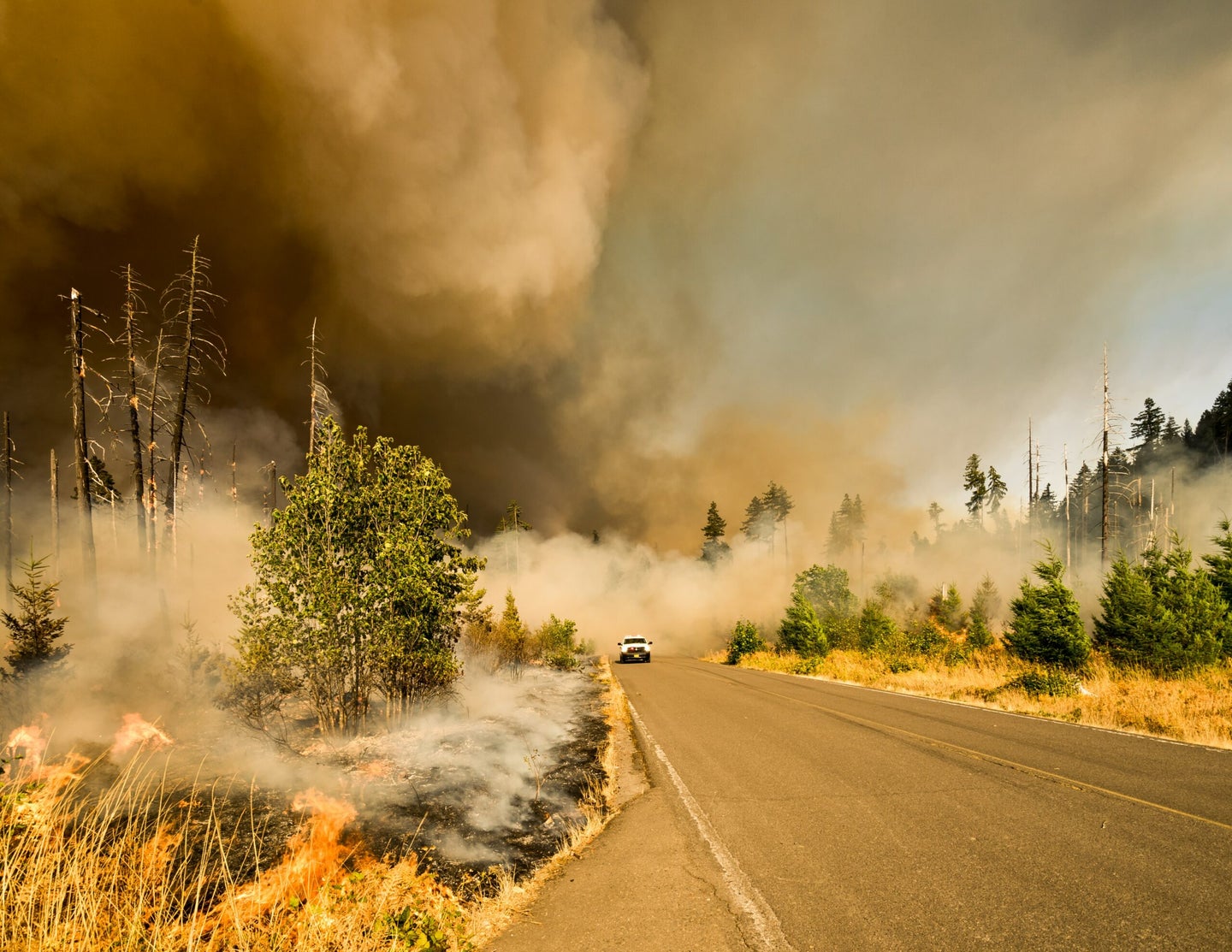 A road during the Jones Fire. Marcus Kauffman
SHARE

As hundreds of fires scorch California, state officials and federal forest agents signed an agreement that may help the state be able to better weather future fire seasons.

Right now, the second and third largest fires in the state’s history are ripping through coastal forests and inland shrubland in Northern California. The flames have claimed more than 1,100 homes and other buildings, along with 1.4 million acres of land.

Climate change is culpable here. While fire is a normal and necessary part of much of California’s forest and rangelands, the region’s trend toward heightened wet and dry extremes, coupled with overall warmer conditions, make the state especially primed for high-intensity burns.

But the way forests have been managed for the past 100 years hasn’t helped the situation. Prior to the Gold Rush, fires were a part of the landscape—ignited by both lightning strikes and Native Americans. Around four million acres burned every year on average, and smoky skies in summer and fall were probably not unusual. After settlers forcibly removed Indigenous people from the land, their cultural burning practices were eventually replaced by policies of full-on fire suppression. Between the 1930s and 1970s, the U.S. Forest Service and state officials maintained a mindset of dousing all blazes.

But periodic, generally lower-intensity fires are important for distributing nutrients, helping seeds germinate, and managing disease. They also prevent the build-up of small trees, shrubs and woody material, which otherwise cause the fires that do spark to become especially large and intense. In response, management has been changing in recent decades, albeit at a slow pace. The perceived risks about the process and high costs have blocked an aggressive statewide policy to reintroduce fire and reduce fuels.

Now, as smoke chokes much of the northern and central part of the state, officials in Sacramento have signed an agreement that appears to do just that. In the agreement, Forest Service agents, the California Natural Resources Agency Secretary, and Governor Gavin Newsom committed to “shared stewardship” of the state’s forests and rangelands. Most strikingly, the non-binding memo names a goal of thinning, burning, or otherwise treating vegetation across one million acres annually by 2025 (with federal and state agencies each contributing 500,000 acres).  For comparison, prescribed burns in California totalled less than 50,000 acres in 2017 (though that stat doesn’t include those wildfires that were allowed to burn or tree thinning).

“This kind of commitment is a really great step,” says Rebecca Miller, an environmental scientist at Stanford University studying wildfire policies. “Restoring healthy forests and rangelands is a great move forward.” In a 2018 forest carbon plan, state officials included a goal to treat 60,000 acres a year on non-federal lands, and noted that 500,000 acres was an “aspirational goal.” So the new agreement seems to be an effort to turn that aspiration into action, and commit the Forest Service to matching the effort. Across California, approximately 20 million acres are thought to be in need of some kind of treatment, such as managed fires or thinning.

The agreement also addressed a key barrier to broad-scale action: coordination between different land managers. California forests and shrublands encompass a patchwork of private, state, and federal management. Sometimes that quilt of management strategies is visible from the sky. “Sometimes, if you have an aerial image, there’s a line you can see when it goes from Forest Service to private land, or from Forest Service to national park, just because whatever has been done on that land is so different,” says Emily Moran, a plant ecologist at the University of California, Merced. She says that at one research site of hers, the trees are visibly a different color between private and federal groves when viewed from above. “Fire and other factors don’t respect those boundaries,” adds Moran. “I think it’s encouraging to try and get people to talk to each other more.”

The agreement emphasizes the need for agencies to collaborate on restoration, since fire is indifferent to jurisdictional boundaries. This could include setting shared goals, consolidating data, and working together to monitor ecosystems and support long-term research projects. For private landowners, the agencies proposed streamlining permitting processes and providing technical assistance to make it less expensive and easier to thin stands. This could be crucial: Miller points out that 39 percent of forests in the state are privately-owned. If an agency, for example, wanted to reduce woody fuels around the perimeter of a town vulnerable to fires, one uncooperative landowner can spoil the effort. “If you get a little bit of resistance, it can complicate efforts to conduct your burn,” says Miller.

Of course, this all comes with a price tag. The agreement notes a few ways to recoup funds. One is to “improve” timber harvest—the statement is vaguely worded but appears to suggest increased logging. “California has some of the highest environmental standards for timber harvest in the world, producing California lumber could decrease demand for timber harvested with lower ecological standards,” the agreement reads. “Given California’s increasing housing needs and greenhouse gas emission goals, California has a direct interest in consuming ecologically sourced lumber.”

That provision may give environmental groups reason to worry. “The question is how you do [tree thinning] in a way that’s responsible and driven by science and not driven by the political demands of the logging industry,” Kathryn Phillips, executive director of Sierra Club California, told the The Mercury News.

A more creative funding idea floated in the agreement is to somehow monetize the small trees, twigs, and other bits scraped up into piles during thinning treatments. Right now, those piles present a fire risk and are costly to manage. But there might be other options, such as a market for chopping debris into plywood material or burning them for biofuel. “That could provide funding that’s needed in order to treat all the areas,” says Moran. “But you would also have to be very careful you don’t create any sort of perverse incentives to overharvest.”

The agreement also provides for continued research throughout these efforts. Moran says that it will be important to continue analyzing how different treatments affect factors like fire behavior and biodiversity. Generally, managed or prescribed flames tend to mimic natural conditions better than thinning treatments, but sometimes fire might be impractical or unpopular (for example, due to concerns about air quality).