Even in space, astronauts can’t escape from germs—but the European Space Agency wants to develop materials that can help tidy up the International Space Station. 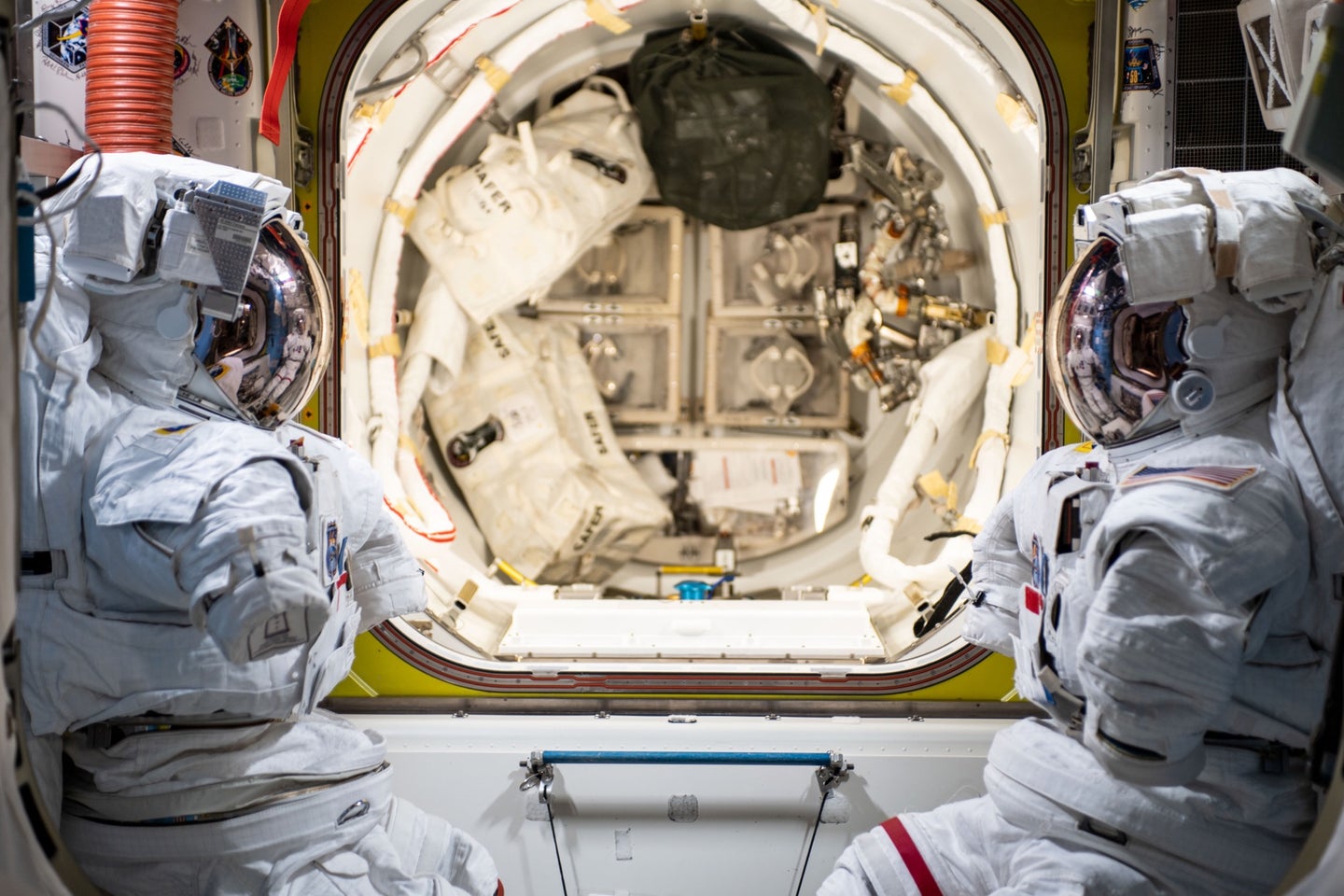 Surfaces, equipment, and space suits on the International Space Station are all at risk of microbial contaminants. NASA
SHARE

The International Space Station is home to an entire ecosystem of microscopic hitchhikers. Keeping these tiny, potentially harmful invaders, like bacteria and other potentially dangerous microorganisms, from following humans into space is nearly impossible, but the European Space Agency is working on creating technology that could stop them in their tracks: self-cleaning spacecrafts.

And as humans work towards long-term space exploration, pristine space habitats are becoming more important—especially as there’s evidence that the ecosystem is already rapidly evolving. “Microbes carried from Earth to the ISS are mutating,” says Malgorzata Holynska, an ESA materials and process engineer who acts as the technical officer for the project. “Strains are evolving that are resistant to common antimicrobial agents.”

In the past few years, the urgency to battle these strains has ramped up. As microbes are adapting to survive in the harsh environment of space, they could eventually contaminate both astronauts and the rest of the solar system. While bacteria found on the ISS haven’t shown to be more virulent or resistant to antibiotics so far, researchers can’t say if the trillions of species of microorganisms will behave the same way in space. Microbes that travel to space are also capable of destroying the inside of the spacecraft, and its equipment. They do this by creating biofilms, collectives of one or more types of bacteria that grow on different surfaces like your teeth. The biofilms can eat away at metals, as well as plastics and rubber.

Holynska says there’s already been many cases of astronauts reporting eroded space tech, including electrical connectors, air conditioners, and parts of the suits used on space walks. Such destruction was a rampant problem aboard the Russian space station Mir, where colonies of organisms were found growing around rubber window seals, on cable tubing, spacesuits, and on communications devices. Now, scientists know these experiences are not unique to the decommissioned spacecraft. In 2019, researchers even learned that the mold growing on the International Space Station’s walls could easily survive being shot by extremely high levels of radiation.

But a potential solution to combat microbes are self-cleaning surfaces, materials coated with compounds that readily remove bacteria or dirt. The ESA plans on using titanium oxide, or titania—a compound typically used in self-cleaning glass and anti-microbial surfaces in hospitals—along with photoactive coatings, which are capable of chemical change when exposed to certain wavelengths of light.

The coating works via a process called photocatalytic oxidation. When exposed to ultraviolet light, titanium oxide breaks down water vapor in the air, and oxidizes microbes, effectively dissolving bacterial membranes that come into contact with it. This creates an added benefit: The materials aren’t selective when it comes to exterminating specific microbial strains, meaning that there’s little chance of these microbes developing bacterial resistance.

So far, the team has successfully tested the coating on surfaces like glass, silicon wafer, aluminum foil, and specially-made paper tissue. But to make them even more effective, Holynska’s team wants to increase titania’s efficiency by “doping” the compound, or altering its compounds to extend its antimicrobial effects under normal light.

[Related: The International Space Station is crawling with bacteria]

This doping is especially necessary as the ESA hopes to create their antimicrobial coatings without the use of silver, a common component of titania found on Earth that is safe to humans, but a deadly heavy metal to have floating around in space.

“Heavy metals such as silver have been shown to leak into water condensate on the ISS,” says Holynska. “For long-term exploration and, in particular, for applications under high humidity conditions or in water pipes [and] containers, this is an issue.” Because silver tends to accumulate in human tissue if ingested, it can cause damage to internal organs like the kidneys and liver, and can trigger changes in blood morphology, she says. The prolonged exposure is a risk humans can’t take as space travel has already been proven to weaken astronaut’s immune systems.

At present, Holynska’s project is just one of the possible technologies looking to solve the various bio-contaminations on the space station. Their research specifically compliments the French experiment Matiss, and the German study Touching Surfaces, both of which investigate bacterial growth aboard the station.

But in the meantime, there is one thing we know without a doubt: Wherever humans go, bacteria are quick to follow, a constant companion as we begin to traverse further into the inky darkness of the cosmos.