How'd they do it? 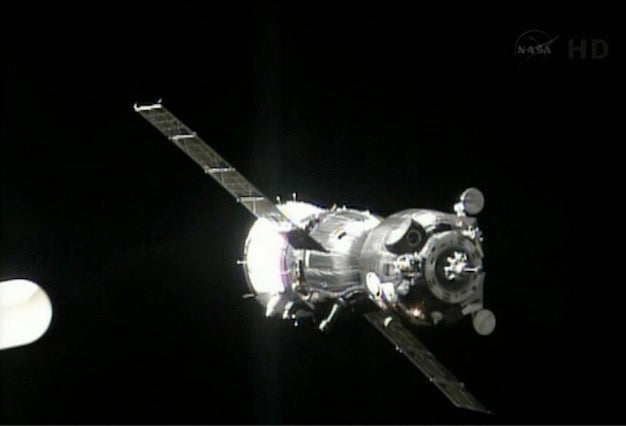 The crew of Expedition 36 aboard the Soyuz TMA-09M set a record for the fastest trip ever to the International Space Station. From launch to docking, the trip took 5 hours and 39 minutes. That’s six minutes faster than the previous Soyuz that used the new “fast track” four-orbit rendezvous.

“Thank you for the best spacecraft, finer than the best pocket watch!” Yurchikhin radioed to Mission Control in Moscow after docking.

Launch took place at 20:31 UTC (4:31 p.m. EDT) Tuesday (2:31 a.m. May 29, Baikonur time).
The new abbreviated rendezvous with the ISS uses a modified launch and docking profile for the Russian ships. It has been tried successfully with three Progress resupply vehicles, and this is the second Soyuz crew ship that has used it.

In the past, Soyuz manned capsules and Progress supply ships were launched on trajectories that required about two days, or 34 orbits, to reach the ISS. The new fast-track trajectory has the rocket launching shortly after the ISS passes overhead. Then, additional firings of the vehicle’s thrusters early in its mission expedites the time required for a Russian vehicle to reach the Station.

After the hatches open at 11:55 p.m. EDT, the new trio will join Flight Engineer Chris Cassidy of NASA and Commander Pavel Vinogradov and Flight Engineer Alexander Misurkin of Roscosmos who have been on board since March 28. All six crew members will then participate in a welcome ceremony with family members and mission officials gathered at the Russian Mission Control Center in Korolev near Moscow.