The second female commander of the ISS adds another title to her long list of records. 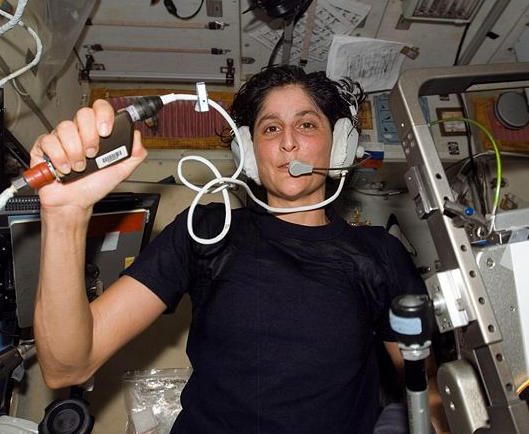 Astronaut Sunita “Suni” Williams, who just took command of the International Space Station over the weekend, likes to break records. (She is only the second woman ever to command the ISS, by the way.) She holds the record for the longest continuous spaceflight by a woman, spending 195 consecutive days on the ISS. Now she’s finished the first-ever spaceathlon.

Williams, 46, competed in the Malibu triathlon using equipment on board the ISS. She used the station’s exercise bike, treadmill and a resistive exercise machine, which basically works like a weight-lifting machine but in weightlessness. This helped her simulate the type of workout she’d get in a half-mile ocean swim, according to Florida Today.

“My watch says 1:48:43 for the three events and the transitions,” Williams told Mission Control after her workouts.

Williams, 46, is a captain in the U.S. Navy and first launched into space in 2007. On that trip, she ran the Boston Marathon in space, while spending 195 consecutive days on the ISS. That’s still a record for the longest continuous spaceflight by a female astronaut. On Saturday, she relieved station commander Gennady Padalk, a cosmonaut who returned to Earth Sunday with co-crew members Sergei Revin and Joe Acaba.

One more milestone is still to come on this trip: On Wednesday (Sept. 19), she’ll celebrate her birthday. Watch her in action below, courtesy of NASA TV.