Lapis lazuli was hard to get your hands—or mouth—on. 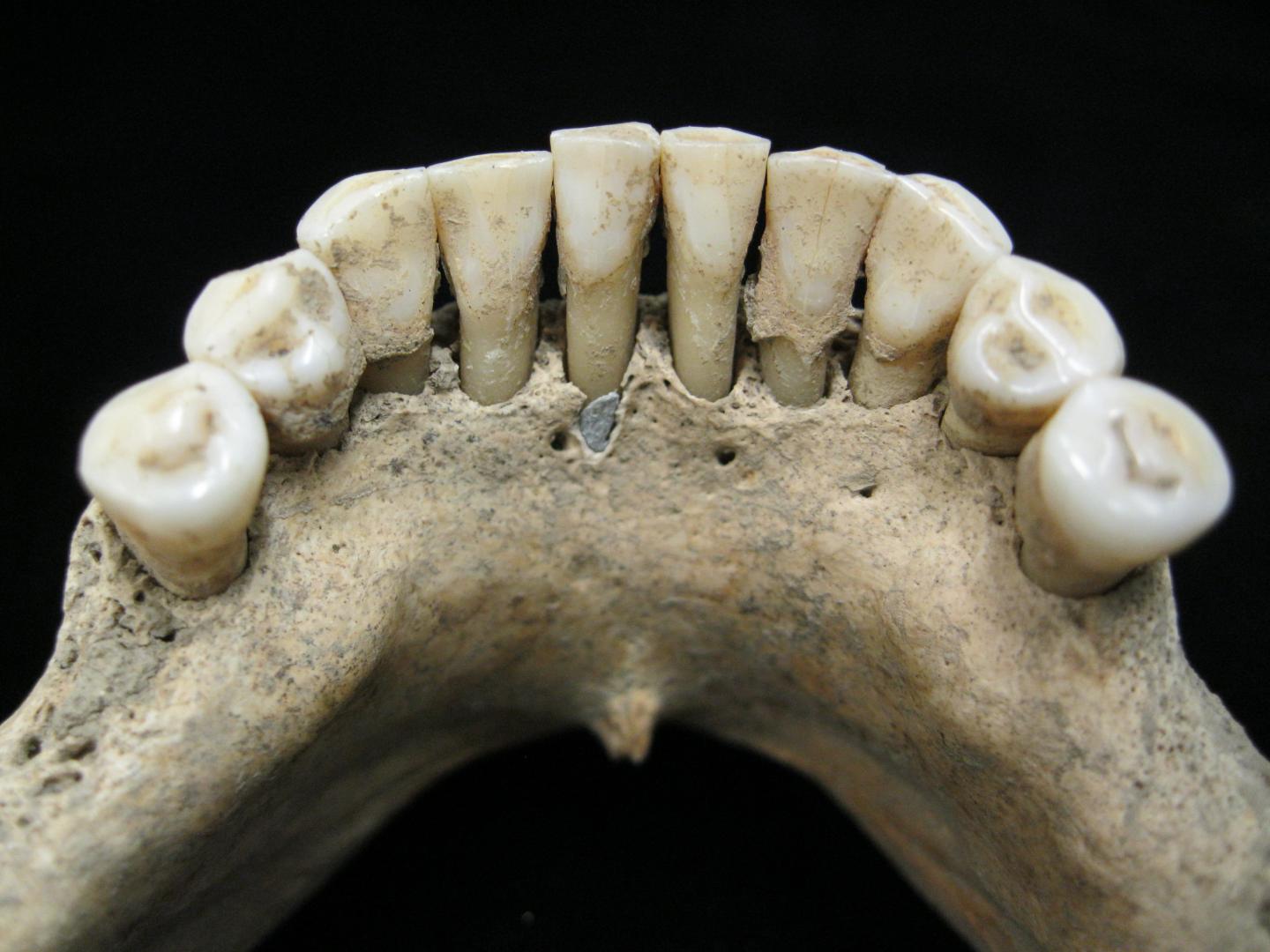 Dead men tell no tales, or so the saying goes. But one woman just managed to illuminate her life story from beyond the grave.

In 2014, archaeologist Anita Radini was studying the dental calculus of bodies buried in a medieval church. This hardened plaque, or tartar, is the bane of a modern dentist’s existence, but it’s crucial evidence for researchers peering into the past. While other body parts disintegrate, teeth often stubbornly remain, and the chemical components of these pearly whites can offer a glimpse into our daily lives.

At the time, Radini was scraping old teeth in pursuit of calcified starches, a useful proxy for diet. Her colleague Christina Warinner, an expert in the evolution of ancient microbes at the Max Planck Institute, hoped to better understand oral bacteria. But something in the mouth of specimen B78 distracted both researchers from their initial pursuits: scattered specks of a brilliant blue.

“Can you imagine the kind of cold calls we had to make in the beginning?” Warinner told The Atlantic. “‘Hi, I’m working with this thing on teeth, and it’s about 1,000 years old, and it has blue stuff in it. Can you help me?’ People thought we were crazy.”

So Warinner and Radini assembled a multidisciplinary color detection squad. Monica Tromp, a New Zealand-based expert in particle analysis with the Max Planck Institute, took on the task of identifying the blue hue’s origin. Alison Beach, a history professor at The Ohio State University and an expert in medieval German women’s role in copying illuminated manuscripts, offered essential cultural context. Warinner and Radini even consulted a scholar of medieval trade about the economic context in which B78 lived. What they found brought a smile to everyone’s face.

B78, the authors determined, was a woman who lived sometime between 997 and 1162 A.D. She died in middle age, between 45 and 60 years old. Save for the blue color in her mouth, she “was otherwise unexceptional,” according to the study authors. But in a new paper published this week in the journal Scientific Advances, the color detectives showed B78 had lapis lazuli in her mouth—evidence she was a highly-skilled copier of manuscripts in a time when most people assume illumination was the exclusive domain of men.

“It didn’t surprise me, it thrilled me,” says Beach, the history professor and co-author in the study. Beach has studied female manuscript makers since graduate school, hoping to make the public understand their role in producing some of the most elaborate artworks of the age. But because most of the volumes are unsigned—and the few that are signed were signed by men—making the case for women’s role in these spaces has always been a challenge. But the blue found in B78’s teeth is stronger evidence than you might expect.

Blue was, is, and will continue to be the hardest color to find or create. While the earth is abundant with brown, green, red, and even yellow pigments, finding a stable blue is like willing a river to stop flowing. As recently as 2017, a chemist made headlines around the world for discovering the first new blue in 200 years, christened YInMn Blue.

In the medieval period, artists had roughly five sources of the color: ultramarine, azurite, Egyptian blue, smalt, and vivianite. The most prized of these was ultramarine, more commonly known in its ground and purified form as lapis lazuli. Found only in one region of Afghanistan, for millennia lapis lazuli demanded the same price as gold. It wasn’t, in other words, something you’d expect to find in random medieval dental calculus. “This isn’t a kind of paint you just give to someone who’s learning,” Beach says (contrary to the suggestion of an outside reader evaluating the paper before publication, who believed the woman was just a janitor cleaning up after the real manuscript makers).

The study entertains other possibilities—that B78 was undergoing lapidary medicine, where she swallowed pigments for her health, or that she engaged in “devotional osculation,” where Christians kissed paintings as part of worship. But the way the blue pigment was distributed deep into the teeth, in fairly consistent layers over time, indicated B78 was one of the “modest and pious women who quietly produced the books of medieval Europe,” the authors wrote. Specifically, Beach thinks B78 and her colleagues would have been narrowing the point on their fine-tipped brushes with their mouths, mixing lapis lazuli into their dental plaque in the process.

Beach and other medieval historians are optimistic this method will apply broadly to other manuscript makers of the era. “I had never heard of using dental calculus as a window on somebody’s everyday life,” Beach says, but now that researchers know where to look, the possibilities feel limitless. “There’s so few sources that medieval historians have for ordinary people. This one clue of the lapis lazuli opens a whole window on the life of a pretty ordinary women in a period in which we have almost no sources,” Beach adds.“She’s not a queen, she’s not a duchess. She’s just a person who lived and worked and died.”