They may be gross, but the conditions in them are perfect for preserving artifacts. 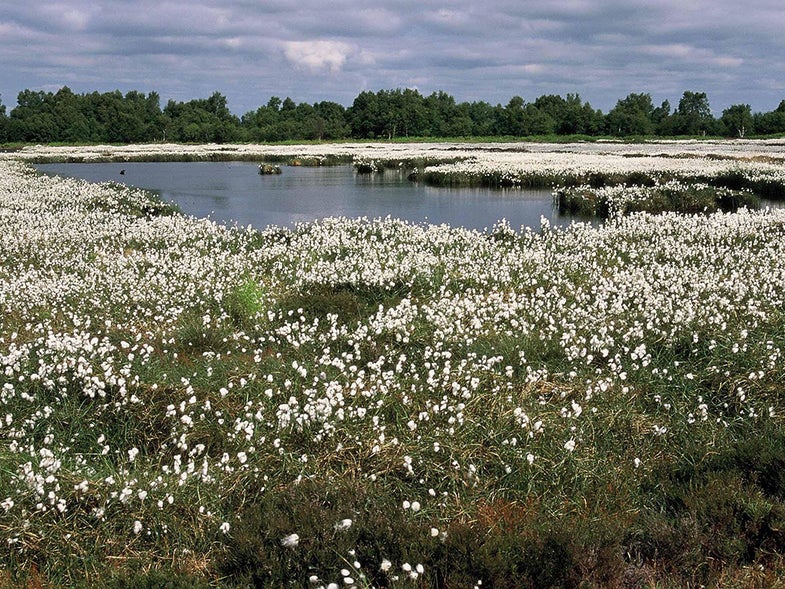 Peat bogs, which cover 3% of the world’s land surface, are special places. While historically often considered as worthless morasses, today they are recognised as beautiful habitats providing environmental benefits from biodiversity to climate regulation. However, they are threatened by drainage, land reclamation for agriculture, and peat cutting for fuel, which has significantly reduced the extent and condition of these ecosystems on a global scale. Bogs are fragile and sensitive to change, whether by human hands or by processes such as climate change. A less well known aspect of bogs is their remarkable archaeological potential. In their undisturbed state at least, bogs are anoxic (oxygen-free) environments due to their saturation. These conditions are hostile to the microbes and fungi that would normally decay organic material such as the remains of plants, which are the principal constituents of the peat. The same anoxic conditions also offer protection from decay for organic archaeological remains. The vast majority of objects and structures used by our ancestors were made from organic materials (in particular wood). These are normally lost on dryland archaeological sites but can be preserved in peatlands. The saturated conditions mean that even soft tissue can survive, including both skin and internal organs. Probably the best known archaeological finds are the remains of “bog bodies” such as the famous prehistoric Tollund Man in Denmark, Lindow Man in the U.K., or the more recent Irish discoveries of Clonycavan Man, Old Croghan Man and Ireland’s oldest known bog body, Cashel Man, dated to the Bronze Age.

But archaeology is only part of the story these environments have to tell. They are important archives of the past in other ways: the layers of moss and other vegetation that make up peat are themselves immensely valuable as archives of past environments (palaeoenvironments). The manner in which peat accumulates means that the deposits have stratigraphic integrity, meaning that contained within each layer can be found macroscopic and microscopic remains of plants and other organisms that shed light on landscape change and biodiversity on timescales ranging from centuries to millennia. The high organic content of peat means that these records can be dated using the radiocarbon method.

The best known such records are probably pollen grains which provide evidence of past vegetation change. But evidence from other organic material can be used to reconstruct other past environmental processes. For example, single-celled organisms called testate amoebae, preserved in sub-fossil form, are highly sensitive to peatland hydrology and have been extensively used in recent years to reconstruct a history of climatic changes. Meanwhile, fossil beetles can tell us how the biodiversity and nutrient status of a peatland has altered over time.

The potential of bogs to preserve both environmental and archaeological records means that they can be regarded as archives of “hidden landscapes”. The accumulating peat literally seals and protects evidence of human activity ranging from the macroscopic (in the form of archaeological sites, artefacts, and larger plant and animal remains) through to the microscopic (pollen, testate amoebae, and other remains) material that provides contextual evidence of environmental processes.

Through detailed integrated analyses these records can provide evidence of past human activity ranging from the everyday exploitation of economic resources of peatlands, through to the ceremonies associated with prehistoric human sacrifice and the deposition of the so-called bog bodies. The associated palaeoenvironmental record can be used to situate these cultural processes within long term patterns of environmental changes.

There has been extensive study of the palaeoenvironmental record from bogs and notable archaeological excavations of sites and artefacts, but there have been relatively few concerted attempts to integrate these approaches. In part this is because generating sufficient data to model the development of a bog in four dimensions (the fourth being time) is a formidable research challenge. But some peatlands have seen relatively extensive archaeological and palaeoenvironmental research over the last few decades, providing an excellent starting point. Hatfield and Thorne Moors, situated primarily in South Yorkshire, are two such peatlands.

These two largest surviving areas of lowland bog in England are located within a wider lowland region known as the Humberhead Levels. After decades of industrial peat extraction, these bogs are now nature reserves managed by Natural England, and are becoming the “wild” bogs they once were. We are attempting to reconstruct the wildscape and bring the complex histories of this vast and dynamic boggy landscape to life.

These moors are just two surviving parts of a once rich mosaic of wetland landscapes. In the past, this landscape was famed for its wildness – a remnant of an extensive complex of mires, rivers, meres and extensive floodplain wetlands. Antiquarians such as John Leland visited the area in the 16th century, and his descriptions provide a “window onto what must have been a truly fabulous ‘everglades-like’ landscape”, as described by local historian Colin Howes.

Now largely drained, tamed, and converted to farmland, it’s hard to imagine the vast wetland landscapes that once characterized these areas. Following large-scale land reclamation in the 17th century, many of the traditional practices such as fishing, fowling, grazing and peat-cutting (turbary) rights were no longer available to commoners. Consequently, the connections between people and place became increasingly defined by a new, dryland landscape and disconnected from its former wetlands that were once so central to people’s lives.

We are investigating and reconstructing this dynamic and changing wildscape throughout its history, reconnecting communities to these wetland landscapes. Drawing together previous research alongside targeted archaeological fieldwork and palaeoenvironmental analyses, we are combining these with newly available digital data and sophisticated modelling techniques to reconstruct their interwoven landscape and human histories. Together, for the first time, we are beginning to see the complexity of the dynamic and changing landscape that once characterised the Humberhead Levels.