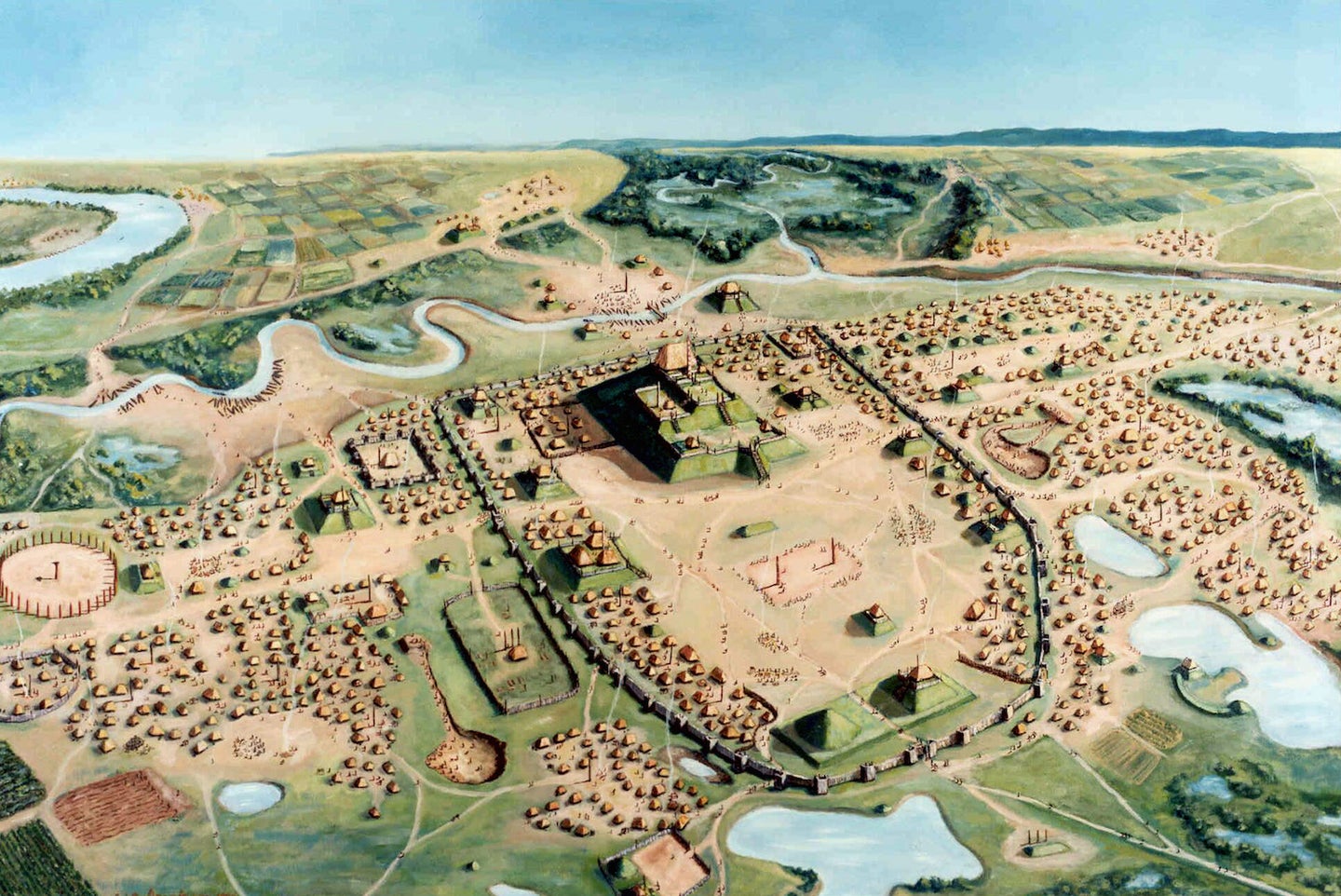 Cahokia, which was located near present-day St. Louis, was the largest prehistoric city in North America in 1150 A.D. Courtesy of William R. Iseminger
SHARE

The Midwest was once the most happening place north of Mexico. In 1250, the Cahokia settlement, located just across the Mississippi River from modern-day St. Louis, Missouri, had a population larger than London’s. But within 100 years, the district was largely abandoned, and the reasons for this desertion remained a mystery. Now, ancient poop molecules are helping scientists understand how climatic changes at the time likely played a role in Cahokia’s demise.

Last year, a team of climate scientists and archeologists analyzed sediment from the bottom of Horseshoe Lake in western Illinois, where the Cahokia lived. By comparing the number of fecal molecules present in each layer of sediment to environmental indicators that signify drought and floods, the team was able to better understand how ancient changes in climate––such as periods of drought and floods–– caused people to either move to higher ground in the area, or leave Cahokia all together. Their findings were published yesterday in the journal, Proceedings of the National Academy of Sciences.

Climate science and archeology have historically been conducted separately from one another, and correlations between environmental events and human population at that time have been drawn by comparing two datasets from the same region, but not the exact same place. For example, scientists gained climate data from lake samples, but population data from artifacts left on dry land. That paved the way for a lot of guesswork.

In this case, scientists from both disciplines got their respective information from the same sample, which is both novel and vital, in this case, to correctly draw correlations between humans and environmental changes.

Climate scientists have long used lake cores to study environmental events. Stevens and AJ White, who lead the study as a graduate student at California State University Long Beach and was a co-author on it, examined sediment from the lake that revealed how full the body of water was at various times, which would help them determine if there were any spells of drought followed by flooding. At the same time, archeologists looked at the amount of fossilized fecal molecules within those same samples: More fecal matter in the sediment meant a larger number of people living there at the time. The more people who lived—and pooped— around the lake, the more fecal matter would run off into the water, and the likelier chance that human gut molecules would be evident in lake sediment layers that formed during the years Cahokia’s population was at its biggest.

Looking at the two records together (the sediment layers and the fossilized fecal molecules), the scientists deduced that summer rainfall decreased around the same time Cahokia’s population started to shrink.“One of the reasons that the people of Cahokia were affected so strongly was due to their reliance on maize. When groups and societies become specialized, it makes them more vulnerable,” says Stevens.

Since the Mississippians––the people who lived in Cahokia––relied heavily on maize, years of drought may have pushed them to move from the Cahokia area to somewhere they could grow more food. Reacting to such environmental pressures is something that still resonates with humans 800 years later.

“In the ancient world, there were other places people could have moved that were more resource-rich,” says Sissel Schroeder, an anthropologist at the University of Wisconsin-Madison, and co-author of the study. “In the modern world, we’re experiencing the same pressures but it’s becoming more difficult to find resource-rich areas that aren’t already occupied by humans.”

According to Stevens, Cahokia was sophisticated for its time, just as we are today, which is why they were able to grow maize and why we’re able to bring water to cities that are built in regions that have very little.

“Records show that the U.S. has experienced mega-droughts that affected almost all regions simultaneously. When that happens, if water is scarce everywhere, it doesn’t matter if we can move water from north to south or east to west,” said Stevens.

Both Shroeder and Stevens expect to see more collaboration between climate scientists and those who study human behavior since the global population is becoming more aware, and more worried, about how we will adapt to our own changes in climate.

“I think that it gives us insights into the long-term trends of a city that has already faced the consequences of climate change,” said Schroeder. “Archeological records can show us how humans responded and how they were resilient.”