Replacing some of the nuts and bolts in robots’ bodies with stretchy artificial muscles would allow them to be more... 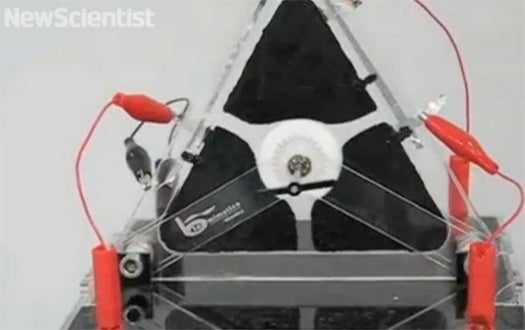 Replacing some of the nuts and bolts in robots’ bodies with stretchy artificial muscles would allow them to be more flexible and lifelike than ever. Researchers at the Auckland Bioengineering Institute in New Zealand have succeeded in using such soft muscles in a motor that creates continuous rotational force. The motor uses only a few parts beside the muscle and needs no gears, cogs or bearings.

These jelly-like muscles are so elastic thanks to an insulating polymer film that can stretch to more than 300 percent of its original size. On either side of the film is a layer of conducting carbon grease. Upon application of a voltage, one layer accumulates a positive charge and the other a negative charge, attracting the layers to each other and squishing the polymer insulator in between them. The polymer layer contracts and expands as voltages are applied and removed.

It takes six of these muscles, arranged like the spokes of a bicycle wheel, to turn the shaft of the motor in continuous rotary motion. The muscles are attached to a central foam ring around the shaft. This foam ring is designed to replace the ratcheting mechanism used in previous devices that used electroactive polymers (EAPs) to create rotation. The new motor doesn’t require any rigid pieces, greatly expanding the possibilities for artificial muscle use. For example, instruments using EAP muscles could perform less invasive surgeries, as they could squeeze through small incisions.