Do Not Fear This Robot 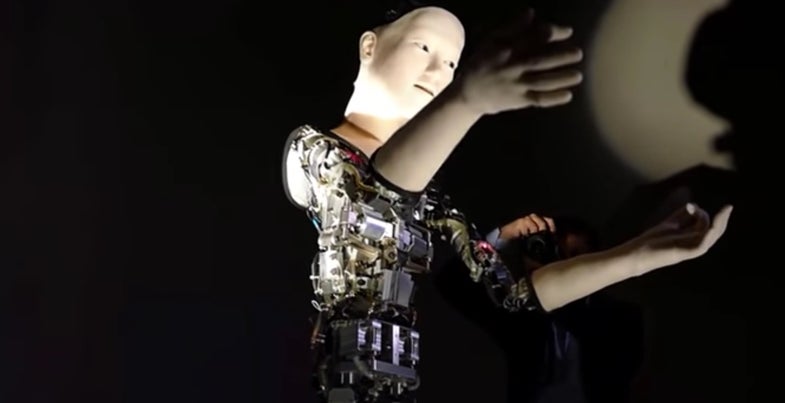 Alter, the half-humanoid Ex Machina lookalike, is a very creepy robot. Maybe it’s the spotlight illuminating Alter in a pitch-black room that makes it seem so scary, or the ominous groans of some electronic instrument that are generated when the robot moves its fingers.

But broken down into its simplest parts, Alter is the world’s most complex inflatable air dancer.

Alter’s big claim to fame is that it’s run by a neural network, according to Engadget. Neural networks are simply software that use information to make decisions on their own, informed by decisions they’ve already been shown. The kind of neural network here switches between a set movement mode and “chaos” mode which moves the bot based on proximity of people, humidity, noise and temperature. It’s a complex way of making the robot move by itself—but its movements are merely reactionary.

But teaching robots to use appendages is still important, and one of Alter’s creators says that their research focuses on letting robots move for themselves while still under human control. For instance, if surgeons and autonomous robots are work side-by-side, the robot needs to know when to stop or match the human’s movements.

Alter, created as an exhibition by Osaka University for Japan’s National Science Museum, won’t see the inside of the operating theater any time soon, but serves as an important step in making sure machines and humans can operate harmoniously.

If you’re looking for a scary robot, might I recommend something in the Boston Dynamics variety?