So We Put a Jet Turbine On Our ATV… 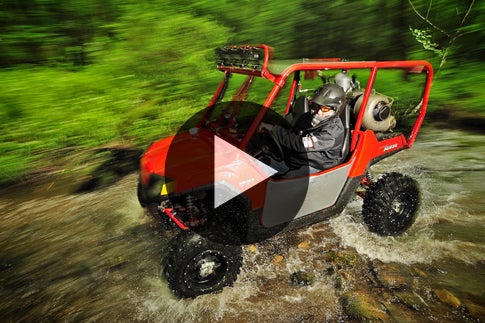 Don your Nomex firesuit and industrial-grade ear protection: It’s time to soak in some nature at 60mph. PopSci staff photographer/madman John Carnett has realized an unholy dream long in the making: an ATV powered entirely by a jet turbine.

And then he took it to the woods and pushed it to the limit; to the edge of logic, control and sanity.

As if intent to cement his internal reputation as the resident DIY crazy man, Carnett told me last year that his next project was going to involve a jet turbine and something he could drive. Unsurprisingly, Carnett didn’t feel the least bit hampered by the fact that he lacked a turbine, a vehicle, and any real knowledge about how to put a turbine on a vehicle. But after ten months, untold thousands of dollars, a big hand from our buddies at QUAD magazine and the equivalent of a college degree in jet-power gleened from dozens of grizzeld old shop guys around the country, Carnett’s turbine-powered ATV, dubbed the Whirl, ripped up some ground in upstate New York last week, reaching speeds of 60 mph and torque that would launch it over an obstacle like the Duke boys escaping Boss Hog.

The vehicle is built around a donated Polaris RZR, a two-person quad that’s been stripped of its engine, roll cage, suspension, shocks, battery, drive axels, wheels, tires and electrical system. When Carnett tried to buy a new turbine and explained why, manufacturers hung up on him, but he soon discovered the gray market of jet-power enthusiasts. His turbine, a former military powerplant manufactured in the 1960s, came from a guy who’d been using it in his Honda CRX and was trading up. The rest of the parts were either fabricated in John’s Philadelphia shop, custom made by someone sympathetic to the project (like the shocks Elka whipped up just for him) or acquired from the far-flung reaches of the Internet (parts for a 40-year-old turbine being typically out of stock at Lowe’s).

Beside the obvious logistical challenges of cramming a jet turbine spewing 1300°F exhaust on a small platform inches behind the driver’s head—throwing off the weight and balance of the entire vehicle—and accounting for an entirely new set of mechanical and electrical systems, is the fact that small single stage turbines like to run at 102 percent of power 100 percent of the time, but it’s a little hard to steer a four-wheeler going balls out through the woods (well, for very long anyway). Carnett’s solution (and a good portion of the ten-months spent building it): install a hydraulic drive system in between the turbine and the built-in gear box. A single axis joystick style controller, like those that control massive mining equipment, acts as an accelerator, adjusting the current flowing to the hydraulic pump, which regulates how much of the turbine’s power makes it to the drive shaft.

After an initial cop-taunting run around the streets of Philly, Carnett took the beast to the woods for its initial off-road run last week, and sent back this note, which pretty well sums it up:

“This past Saturday I took the WHIRL to a 14-acre area for R&D. The machine exceeded my dreams, scared a few people and made me smile so hard that it hurt. It’s rather like standing next to a 114db hot dog cooker that could explode at any time: tens of thousands of RPMs by your head, 8,000 RPM by your ass. The danger seems to defy the logic of the device. You get into an adrenaline rush that is unlike anything you could imagine—faster thru the woods, mud flying- at the very edge of control; then still faster; you get to the point of almost crashing prior to slowing down. Limits appear; the blurr stops; the turbine whine slows; you get out then fall to the ground with a body bruised yet feel no pain… J” 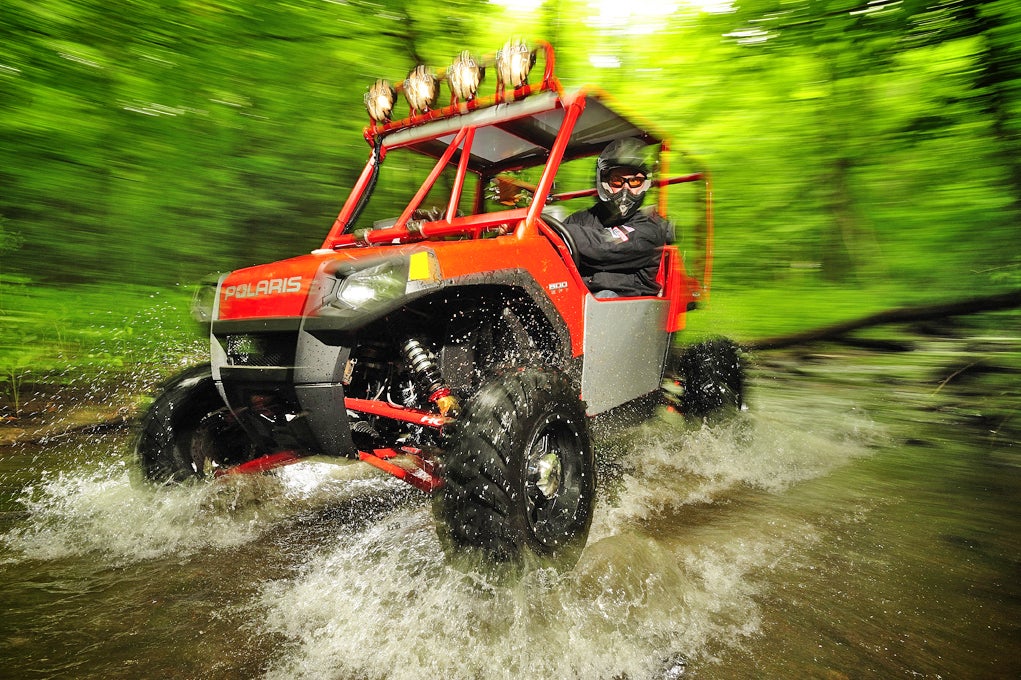 The jet-powered Whirl tops out at 60mph. 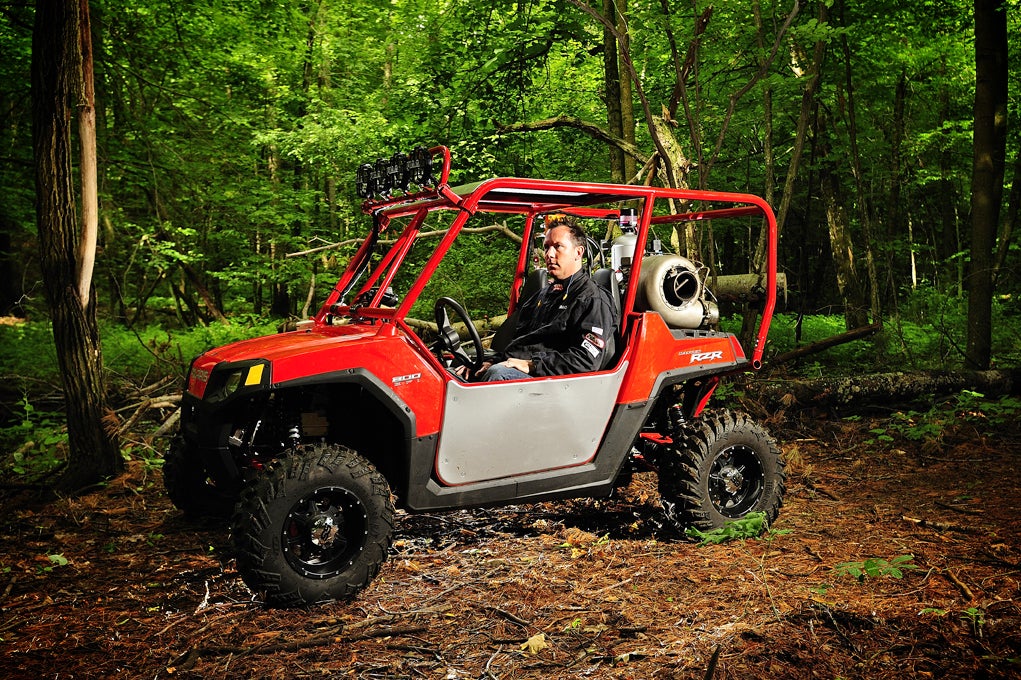 Its crazed creator, John Carnett, behind the wheel. 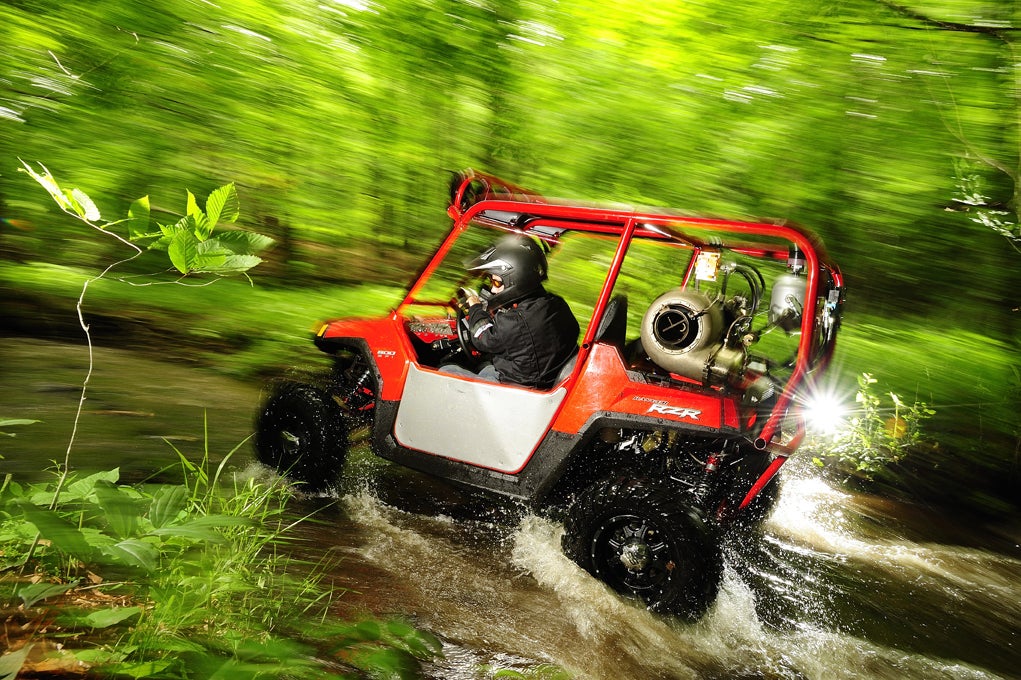 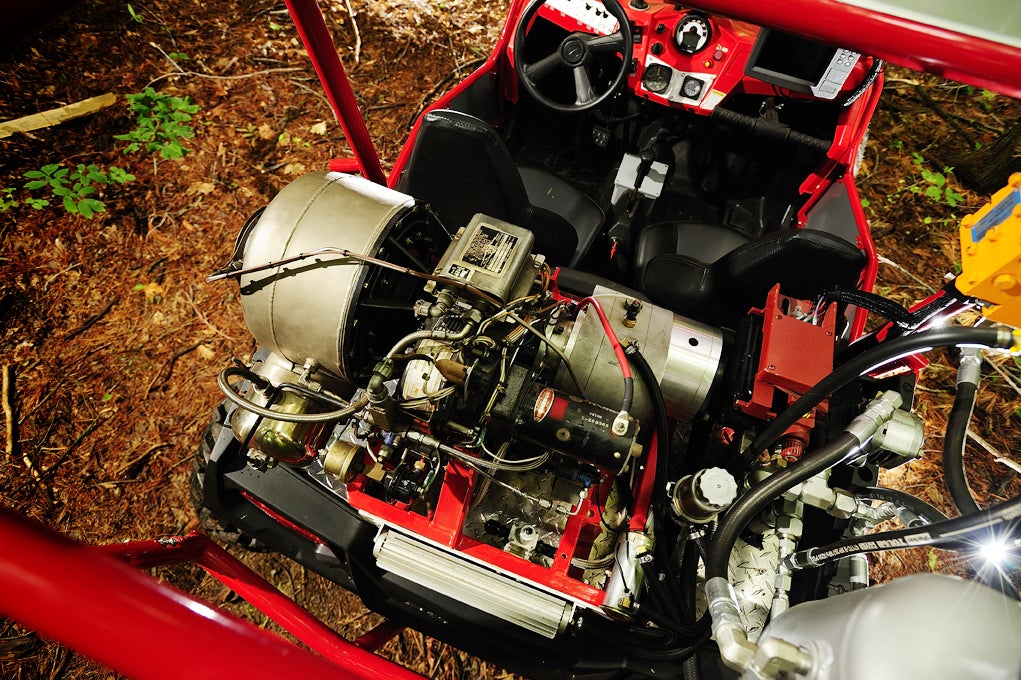 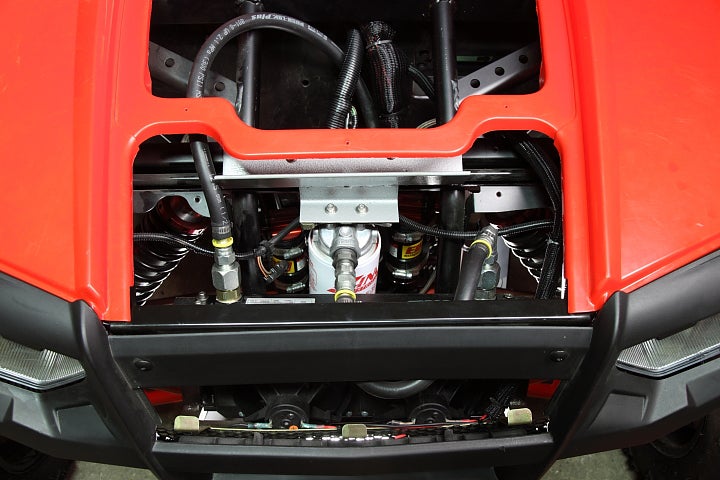 A look at the front-mounted hydro fluid cooler and hydro filter. Return to Article and Video 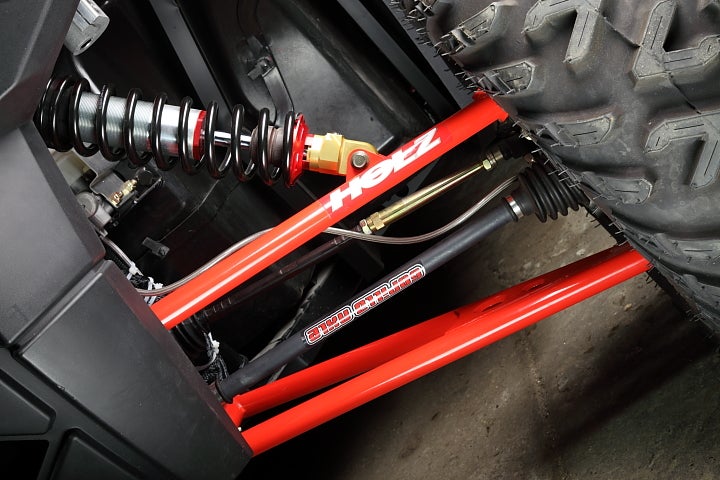 Elka contributed custom modifications to the Whirl’s shocks. Return to Article and Video 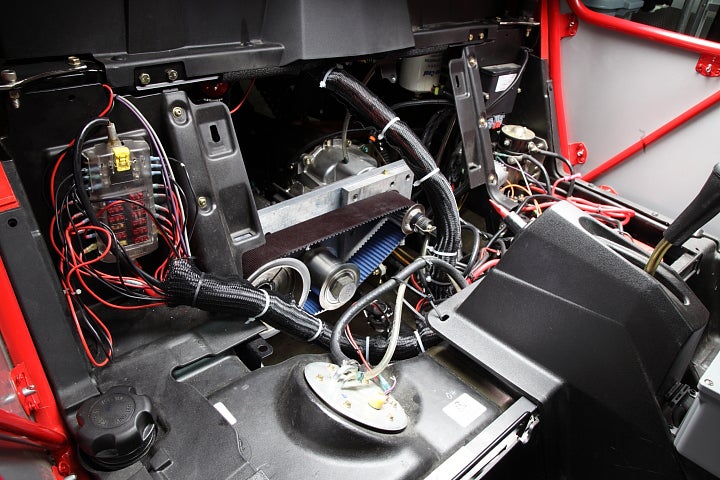 Electrical system junction and the final drive components link the hydraulic motor to the gear box. Return to Article and Video 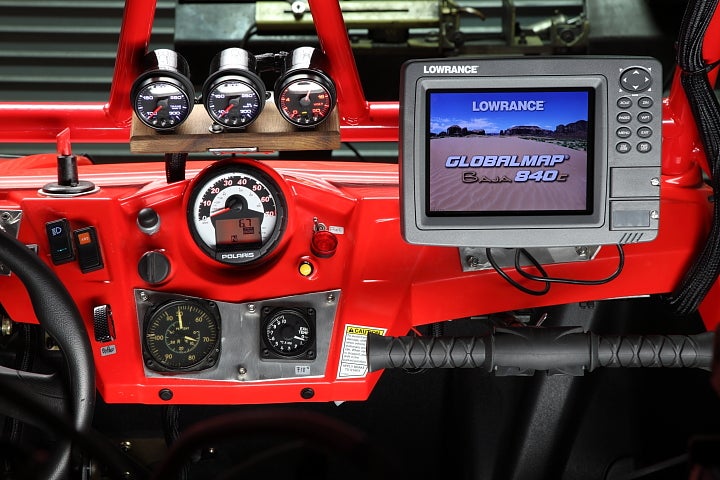 Gotta have GPS. Return to Article and Video 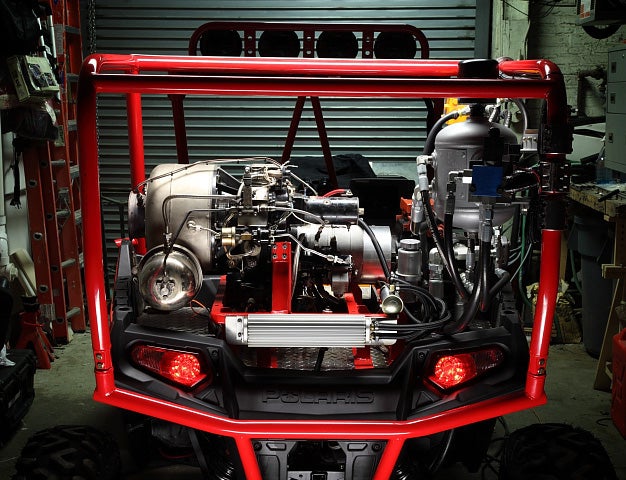 A rear-view in the garage, showing turbine and gear reduction oil cooler. Return to Article and Video 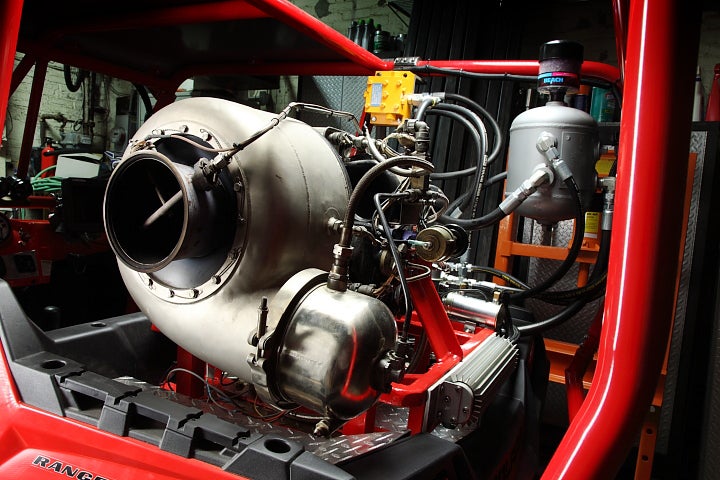 The Turbine, Up Close 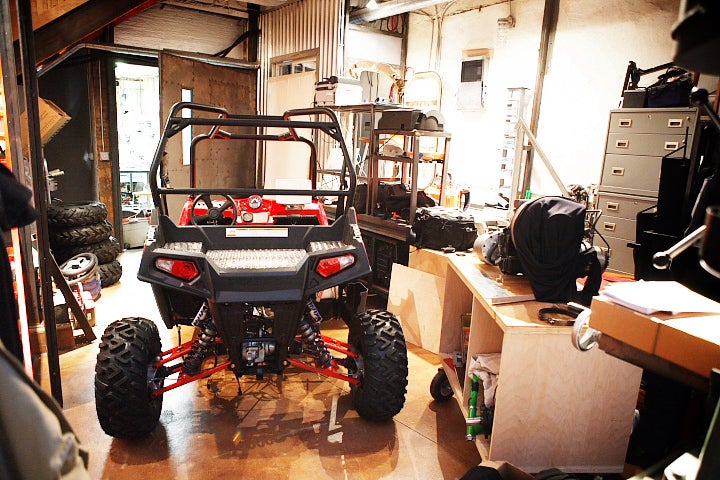 The Polaris RZR seen before its unholy union with a Jet Turbine. 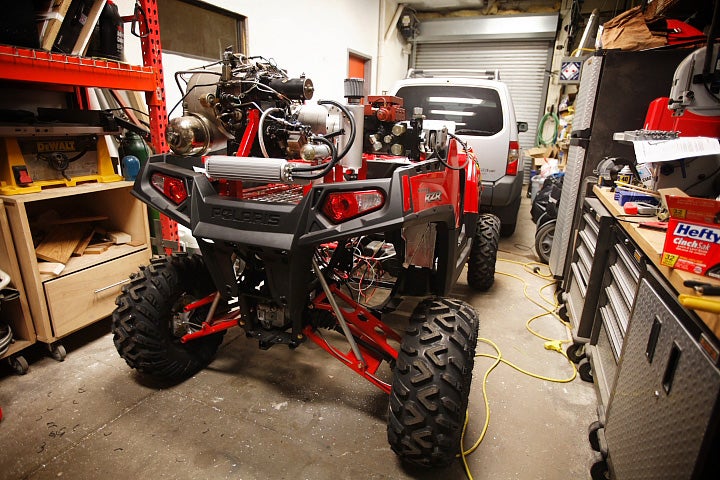 A Work in Progress

Seen with cage removed. Return to Article and Video 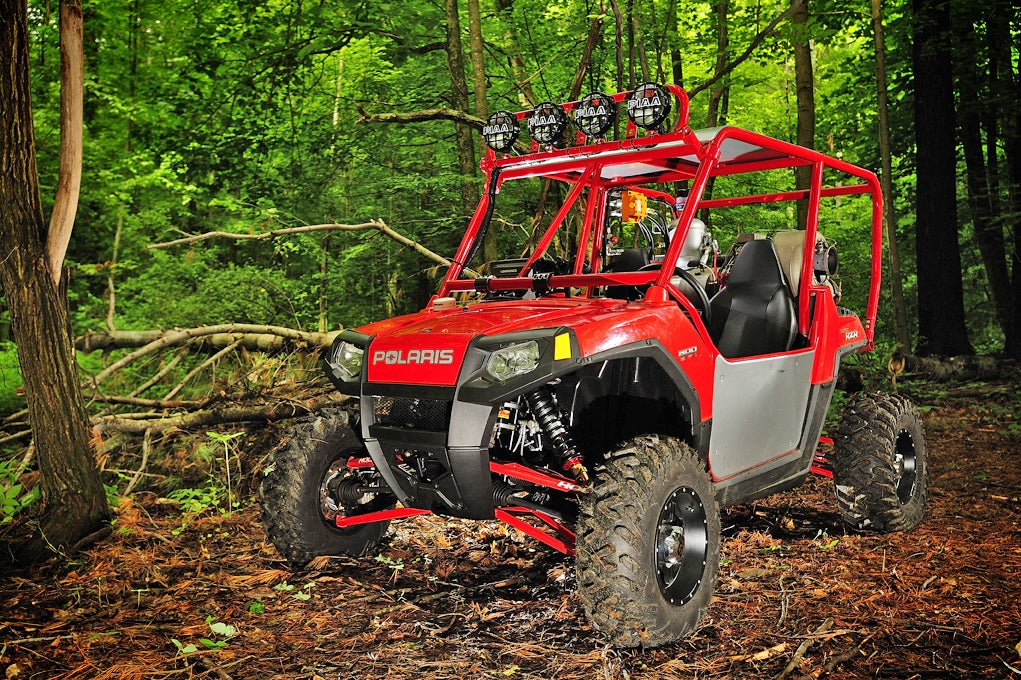 The finished product, at rest. Return to Article and Video
Projects
Videos