Looking Inside a Mummy’s Stomach 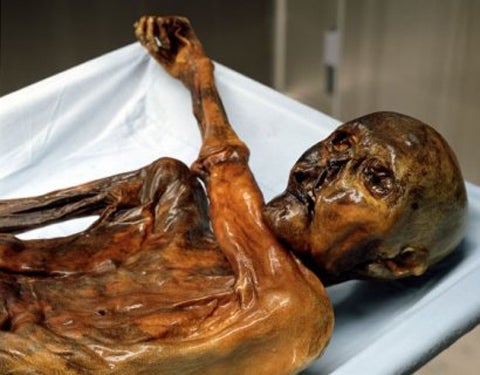 Whether it was a quarter as a kid, some mean-looking peppers or that worm at the bottom of your shot glass, you’ve probably swallowed some weird things over the years. But six kinds of moss? Well then Oetzi, the famous, 5,300 year old frozen mummy found in the Alps nearly two decades ago, has got you beat. What’s more, a new anthology of research on Oetzi highlights those mosses, along with some other associated plants, to challenge theories about how he lived and how he died.

Previously, scientists believed Oetzi was shepherd, killed by a blow to the head after being shot with an arrow. However, new evidence calls into question the hypothesis that his skull was crushed by the person who shot him, and dung found with Oetzi suggests he was a hunter, not a herder. Researchers also used plant matter found on his person to link Oetzi with a farming culture east of the Alps, fleshing out our understanding of Oetzi’s world.

“The big news is that we are putting the knowledge of the iceman into a wider context,” said Klaus Oeggl, professor of archeobotany at the University of Innsbruck in Germany, “Up to now, everything was focused on the mummy and the situation at the top of the mountain. Now we want to know what the setting of the finding was.”

The findings, published in a special issue of the journal Vegetation History and Archeobotany devoted entirely to Oetzi, highlight six mosses in Oetzi’s stomach. The discovery of any moss is strange, as moss has no nutritional value. Oeggl and his colleagues showed that the mosses were not food, but were instead remnants of Copper Age technology. It seems Oetzi used one type of moss as a wrapper for food, and another as a bandage for wounds on his hand and shoulder, which (somewhat) explains how he might have accidentally eaten the mosses.

The presence of the antibiotic bandage moss seems to contradict a hypothesis put forward in 2002 at the Institute for Mummies and the Iceman in Bolzano, Italy. There, the researchers claimed a blow to the head killed Oetzi. The theory held that after Oetzi was shot, his attacker either bludgeoned Oetzi in the head or Oetzi hit his head on rock when falling. Instead, Oeggl says Oetzi bled to death from the arrow wound after the application of first aid.

In August of this year, a paper in Rapid Communications in Mass Spectrometry announced researchers had found hair in Oetzi’s clothes came from domesticated animals. However, an analysis of plant matter by Oeggl and his team confirm that the dung found beside Oetzi came from wild game, not domesticated animals. Additional stomach contents corroborate that finding, as Oetzi ate deer, not mutton or beef, as his last meal.

Oetzi was discovered in 1991 when two German hikers stumbled upon his remains, frozen in an Alpine glacier. Preserved by the freezing process, Oetzi has provided scientists with a wealth of data about ancient Europe. However, his tattoos, arrows, and bronze axe have led researchers to speculate he was everything from a hunter to a metal worker, from an impotent outcast to an adored victim of ritual sacrifice. And while many of those mysteries about Oetzi have been solved, it seems like there is still a great deal to learn about the iceman and his people.