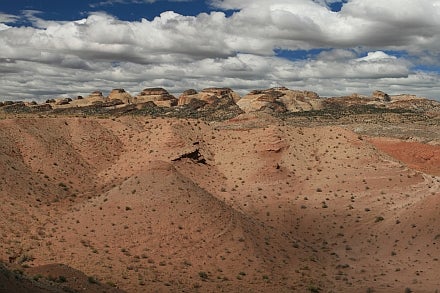 About 190 million years ago, a desert larger than the Sahara covered much of the area that is now the southwestern U.S. with sands much like the ones shown in this image taken in Capitol Reef National Park. In the image background can be seen the Waterpocket Fold—a 100-mile-long warp in the earth's crust where erosion over millions of years has exposed layers of rocks and fossils. Laurie J. Schmidt
SHARE

About 190 million years ago, during the Early Jurassic Period, a vast desert larger than the Sahara covered much of what is now Utah, Wyoming, Colorado, New Mexico, Arizona, and Nevada. Given that Jurassic time was the “Age of Dinosaurs,” it’s not surprising that fossil evidence of the great reptiles would show up there now and then. But recently, geologists from the University of Utah uncovered an exceptional find — a large concentration of dinosaur tracks and rare tail-drag marks.

Located in the Coyote Buttes North area of the Vermilion Cliffs National Monument, which straddles the Arizona-Utah border, the three-quarter-acre site has more than 1,000, and maybe even thousands, of dinosaur tracks. The tracks were previously believed to be potholes — circular depressions in sandstone caused by erosion — but because of their physical features and the fact that they were concentrated along only one surface, the scientists realized they were actually dinosaur footprints.

The results of the study were published in the October issue of the international paleontology journal Palaios and authored by Marjorie Chan, professor at the University of Utah, and her graduate student, Winston Seiler.

According to Seiler, the variety of track shapes and sizes indicates that at least four dinosaur species were gathered at what he believes was a watering hole in a desert oasis. “The different-size tracks (one to 20 inches long) may tell us that we are seeing mothers walking around with babies,” he said. The 2.4-inch-wide tail-drag marks, some of which are as long as 24 feet, are particularly noteworthy, as there are fewer than a dozen such sites known worldwide, according to Seiler.

The tracks and tail marks were preserved when shifting sand dunes covered the area where the dinosaurs left their prints. Over millions of years, the dunes became the Navajo Sandstone, which is visible today throughout much of the Colorado Plateau region. More than 60 track sites have been found in Navajo Sandstone, but the density of the newly discovered “trample surface” makes it unique. 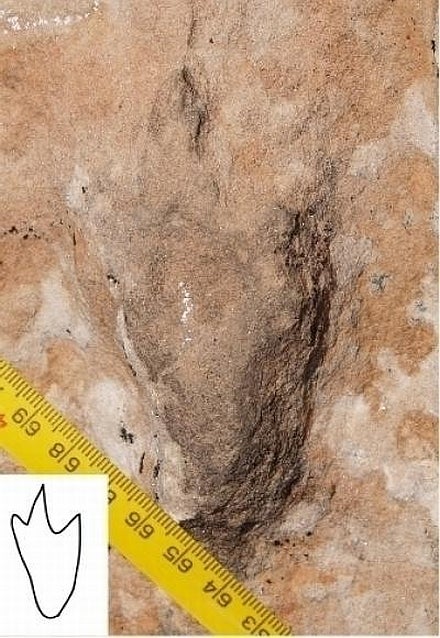 This four-inch long dinosaur track is one of four types of dinosaur footprints recently identified by University of Utah geologists in the Coyote Buttes North area of the Vermilion Cliffs National Monument near the Arizona-Utah border. The tracks were left by a small dinosaur—perhaps only three feet tall—some 190 million years ago. 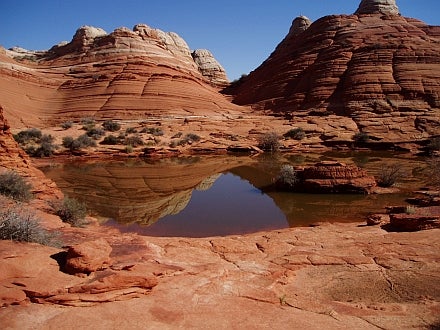 Coyote Buttes is a Special Management Area in the Vermilion Cliffs National Monument, located in southern Utah and northern Arizona and managed by the U.S. Bureau of Land Management. 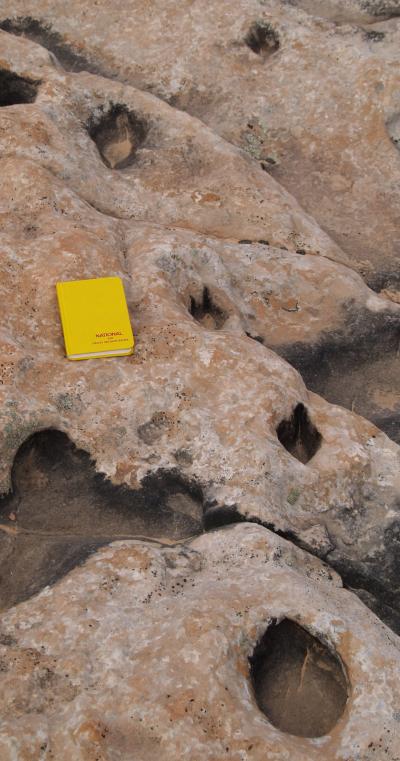 This photo shows a trackway—a set of prints made by one dinosaur as it walked through a wet, sandy oasis some 190 million years ago, in what is now the Coyote Buttes North area, located within the Vermilion Cliffs National Monument near the Utah-Arizona border. In October, University of Utah geologists published a new study in the journal Palaios showing that numerous impressions at the site are dinosaur tracks, not erosion-caused potholes as was previously believed. 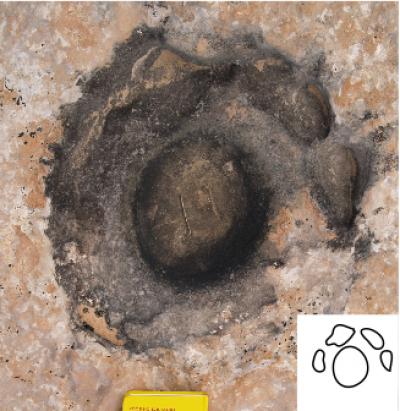 One of the many dinosaur tracks recently identified by University of Utah scientists in the Vermilion Cliffs National Monument, this 14-inch-long track is two footprints in one and was left by a creature that walked on four legs. The imprint includes the deeper central circular portion, which was left when a dinosaur’s rear foot stepped into the larger, shallower print left by a front foot. The toe prints, top and upper right, were left by the front foot, obscuring prints from the rear toes. 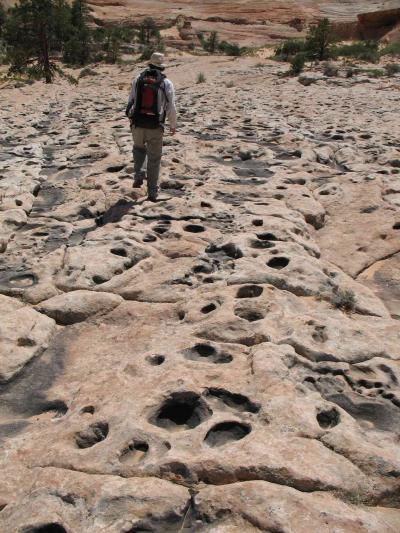 University of Utah geologist Winston Seiler walks among a large concentration of dinosaur tracks that were preserved in a “trample surface,” where the reptiles likely gathered to drink water at an oasis among arid sand dunes some 190 million years ago. The site is in the Coyote Buttes North area in the Vermilion Cliffs National Monument near the Arizona-Utah border. 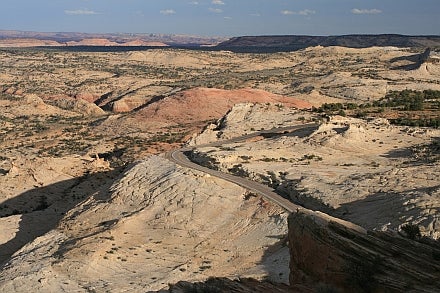 Utah Highway 12 Scenic Byway winds smack dab through the middle of Navajo sandstone outcroppings in the Grand Staircase-Escalante National Monument, north of the Coyote Buttes area in southeast Utah. The Navajo sandstone was deposited on a Triassic-Jurassic desert during the Mesozoic Era—the “Age of Dinosaurs.” 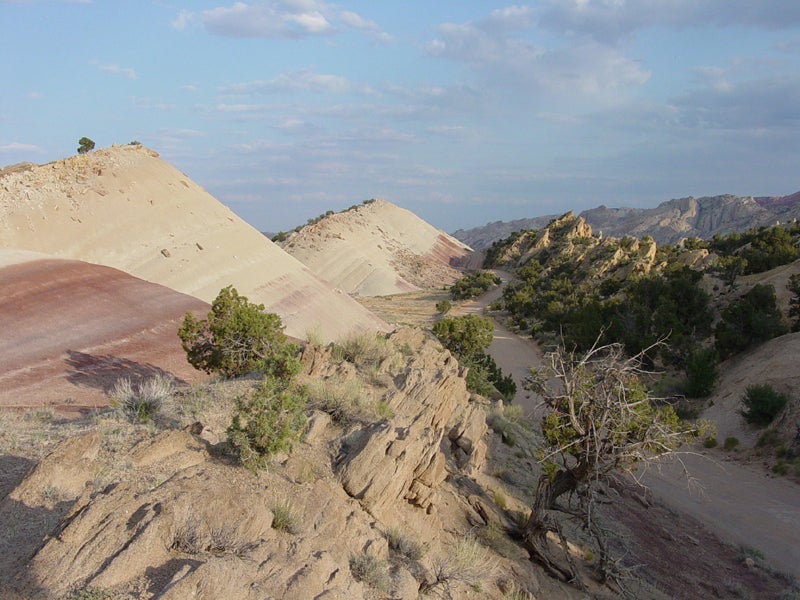 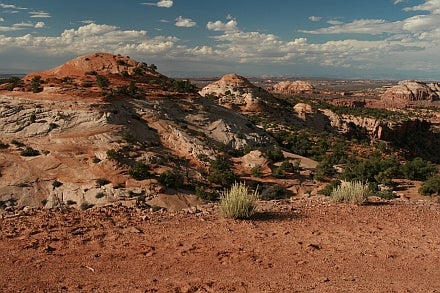 During the Mesozoic Era (the “Age of Dinosaurs”), large amounts of dune sand accumulated in the southwestern U.S. These rocks, shown above in Canyonlands National Park, are “petrified” remnants of both Triassic and Jurassic Period dunes.

About 190 million years ago, a desert larger than the Sahara covered much of the area that is now the southwestern U.S. with sands much like the ones shown in this image taken in Capitol Reef National Park. In the image background can be seen the Waterpocket Fold—a 100-mile-long warp in the earth’s crust where erosion over millions of years has exposed layers of rocks and fossils. 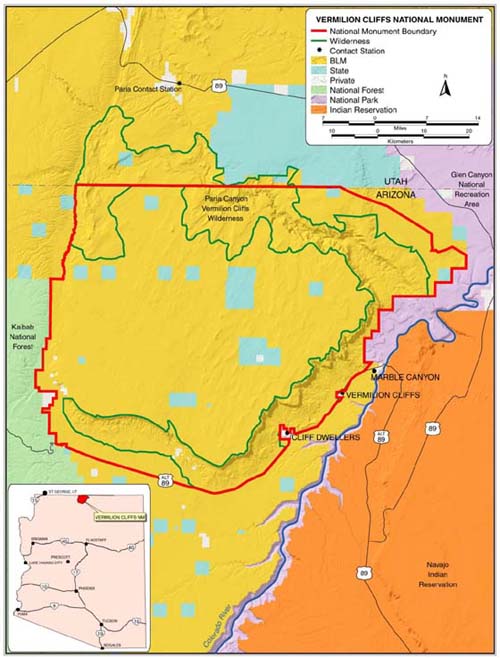