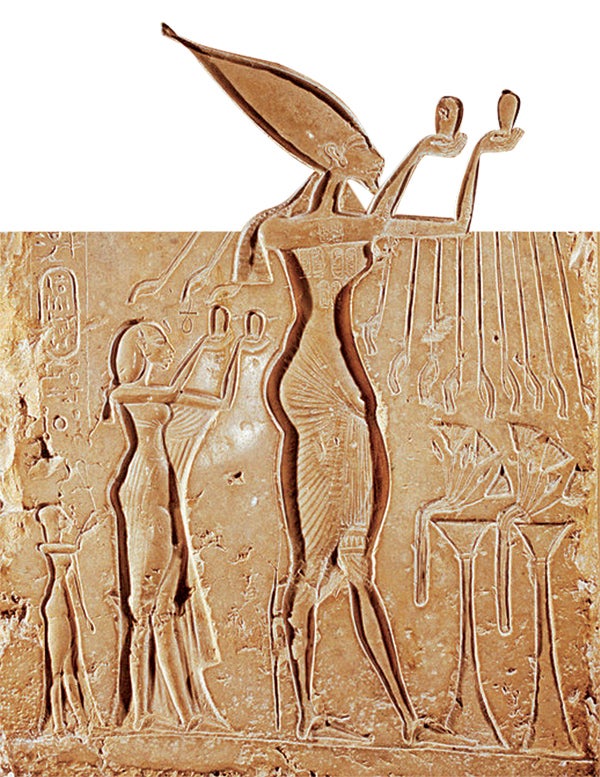 Paintings and statues of Akhenaton suggest that he suffered from genetic diseases. K. Garrett/National Geographic
SHARE 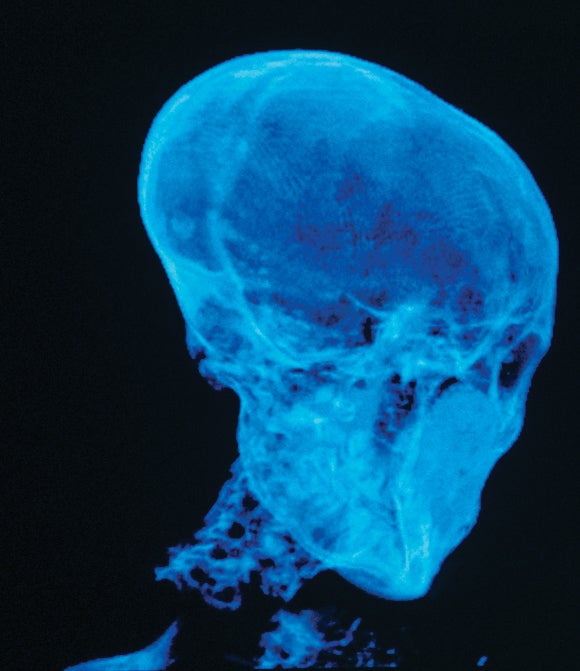 A CT scan of the skull of King Tut, who may have been his son, shows the same abnormal head shape.

The Egyptian pharaoh Akhenaton’s voluptuous body shape and elongated head and neck, recorded in ancient depictions of the male ruler, have long perplexed historians. But now Irwin Braverman, a professor of dermatology and an expert on visual diagnosis at the Yale University School of Medicine, is offering a theory on the characteristics, which are not found in representations of other pharaohs: Akhenaton may have suffered from two genetic disorders that affect body shape.

Paintings and statues of Akhenaton suggest that he suffered from genetic diseases.

Akhenaton, who ruled from 1353 to 1336 B.C., is shown in paintings and statues as having prominent breasts and buttocks—indications, Braverman says, of a hormone disorder. An overproduction of the enzyme aromatase, which is instrumental in the body’s production of the hormone estrogen, is the likely culprit. In males, the disorder results in the development of feminine traits by puberty. Depictions that show Akhenaton’s prepubescent daughters with breasts support the genetic hormone-disorder theory.

Another genetic disease, craniosynostosis, which can result in the joints in the skull fusing too early, could have caused the pharaoh’s elongated head and neck. Egyptologists sometimes refer to the shape, which was common among 18th-dynasty royalty, as “royal head.” Illustrations of Akhenaton’s daughters also show the elongated head, as do mummies of his progeny. One such descendant: child-king Tutankhamen, who some believe may have been Akhenaton’s son. Akhenaton’s mummy has yet to be found, but Braverman hopes that DNA analysis of mummies of the pharaoh’s descendants may one day confirm his theory.