A dramatic demonstration -- with exclusive video! -- of why the same gas that heats your house can also make it explode 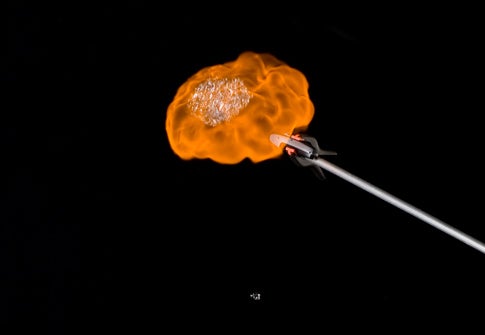 Living in the Midwest, where heating homes with propane is common, I periodically see reports in the local paper that yet another unoccupied house has exploded. They often note that the roof was found in the basement, while the walls were spread some distance into the neighboring fields.

Roof-in-basement syndrome begins when propane, which is heavier than air, leaks and fills up the lower levels of a house, mixing with the home’s ambient air. Once the layer of gas reaches the height of a pilot light in a stove, it triggers a huge explosion. (The refinery adds a very strong odor to propane, so if people are home, they typically notice the leak before the concentration approaches a dangerous level.)

Why does the same gas that burns gently in a furnace turn into an explosive menace when it leaks? Without oxygen, propane can’t burn. You could light a match inside a propane tank, and nothing would happen. Furnaces control the rate of burning by mixing propane with air slowly as it burns. But premix large amounts, and the results are very different. 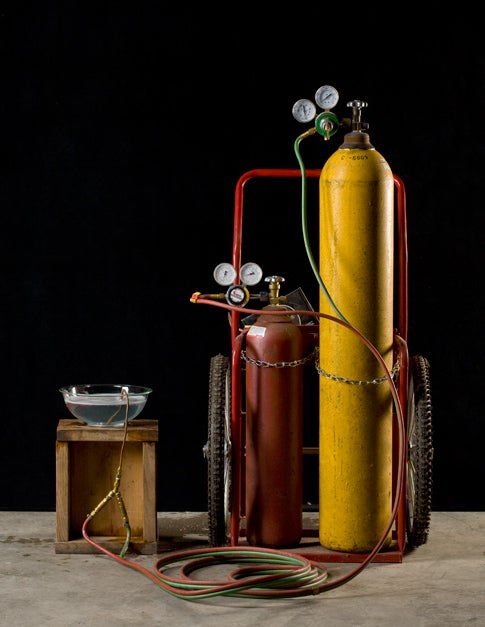 To show this, I filled soap bubbles with hydrogen gas and lit them with a lighter. (I used hydrogen because it makes the bubbles float, so they’re safer to light at a distance. Propane bubbles would sink.) Pure-hydrogen bubbles burn quietly as the hydrogen mixes with air and burns over several seconds. Fill the bubbles with a mixture of hydrogen and oxygen, though, and what was a gentle whoosh becomes a chest-thumping bang. When fuel and air mix in advance, the entire volume of gas burns in a fraction of a millisecond — which is to say, it explodes.

I’ve done this demonstration several times with people unfamiliar with just how much power can be tied up in a few soap bubbles. I’ve never actually blown a window out, but I think I have knocked a few socks off.

THE SETUP
High-pressure tanks of hydrogen [red] and oxygen [yellow] supply the raw elements for this demonstration. What keeps it safe are devices at the ends of the hoses called flashback arrestors that prevent the gases from mixing inside the canister.

Achtung! Theodore Gray is trained in lab safety. Don’t try this at home. See more of Gray’s work at periodictable.com.