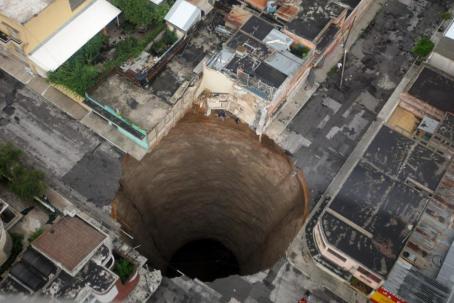 The Guatemalan government posted this picture Monday of a massive 200-foot-deep sinkhole in the capital of Guatemala City, which opened after a weekend of heavy rain from tropical storm Agatha.

A three-story building and at least one man were swallowed by its gaping maw, which officials estimate to be 100 feet in diameter.

About 146 people have died across Central America since Agatha’s landfall, with Guatemala reporting most of the casualties, according to the Daily Mail.

Mudslides are mostly to blame, and to make matters worse, officials are saying ash from the Pacaya volcano has blocked drains. Ash is also keeping Guatemala City’s airport closed, which could hamper international aid efforts.

Sinkholes are pretty common in Guatemala, Florida and other spots; just last month, a farmhouse with four people inside collapsed into a sinkhole in St. Jude, Quebec.

Sinkholes form in places where the underlying ground layer consists of limestone, salt beds or other soluble rock, which dissolves in water. Groundwater coursing beneath the surface eats away at the rock, slowly eroding and destabilizing it. Often, new underground caves are created, which then collapse in catastrophic scenes like this one.

Unfortunately, not much can be done to prevent the phenomenon — other than hope you don’t get swallowed.