Video: Lego Space Shuttle Lifts Off for the Stratosphere

So many intrepid stratonauts send stuff into the upper atmosphere these days, it’s almost hard to keep track — there’s... 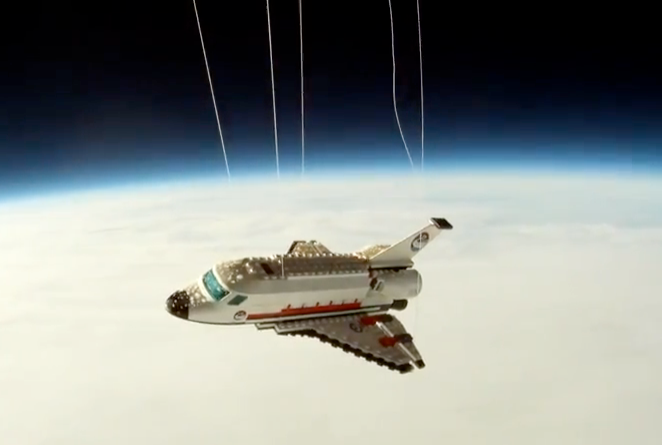 So many intrepid stratonauts send stuff into the upper atmosphere these days, it’s almost hard to keep track — there’s even a suborbital balloon factory now. But this weather balloon experiment still caught my eye. It’s a little space shuttle, winging its way into orbit one more time…in Lego form.

Romanian shuttle enthusiast Raul Oaida posted this video to YouTube of his hand-made Lego Space Shuttle kit to prove that “although retired, this machine can still fly, albeit in toy form.” He filled a weather balloon with helium and rigged it with a GPS device and a high-definition camera, launching on New Year’s Eve from a field in central Germany. He used the GPS to recover the device 240 kilometers south of where it launched.

The tiny shuttle’s max altitude was 35,000 meters, or roughly 21 miles, merely a fraction of the 200-odd miles the real thing used to attain on a semi-regular basis. But it’s nice to once again see this shape in front of a dark horizon, isn’t it?